AMD’s new line of Ryzen 4000 7nm Renoir APUs is going to lead to an explosion of red team notebooks and the Ryzen 7 4800HS is the chip at the beating heart of Asus’ great-looking ROG Zephyrus G14 gaming laptop. The Zen 2-based eight-core, 16-thread APU will pair up with an Nvidia RTX 2060 GPU to provide serious gaming performance in a svelte 14-inch form factor.

While the smart little chassis looks good as standard there is the option to funk it up just a little bit more. The special edition of the Asus ROG Zephyrus G14 offers a precision cut LED section on the laptop’s lid. But this isn’t just the usual ROG bling that we’ve seen in a million gaming notebooks before, this is a single-colour LED array which allows you to display your own pixel art gifs on your laptop. If you’re not excited by that then you’ve got serious issues with joy, my friend.

There’s a definite lack of small form factor gaming laptops on the market, but Gigabyte’s Aero 15 has encouraged manufacturers to shift away from the traditional 15-inch beasts. And Asus’ new Zephyrus G14 is smaller and lighter than the Gigabyte machine in every way, and yet still has a hell of a lot of gaming power on offer.

The Nvidia graphics card has a lot to do with that gaming performance, but the new AMD Ryzen 7 4800HS chip, of the new Zen 2 Renoir APU family cannot be ignored. With the ROG Zephyrus G14 Asus teamed up with AMD to create an exclusive series of APUs tuned specifically for the machine’s smaller chassis design. 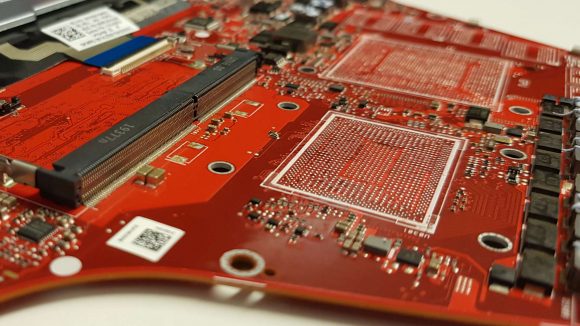 According to Asus the G14 “uses a special CPU that generates less heat, enabling an unprecedented level of performance for such a compact chassis.” The eight cores have been tuned to keep the thermal demands down while still delivering on their 16-thread promise. We’ve had a good look inside that chassis, at the cooling loops created for the new Zephyrus, and there’s not a whole lot of space in there.

It’s lucky then that Asus has been able to use the same cooling fans in the G14 as it does in the larger 15-inch models with their broader frames. Like the Zenbook designs the Zephyrus G14 uses a similar ErgoLift hinge, which both brings the keyboard up to an angle more suitable for typing, and provides clearance underneath to improve airflow. 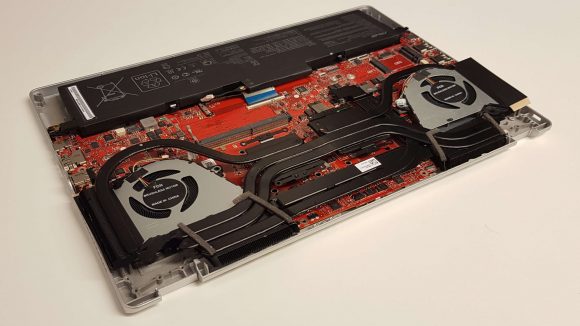 The little gaming laptop also supports Type-C charging too. That doesn’t just mean you can keep your phone charged on the go, it also means you can use a battery pack to top up your notebook for a little extra life away from the plug socket. The G14 also has a smart Windows Hello-compatible power button that caches your fingerprint when you first power-on the machine so it can read it back to the OS when it gets around to booting. 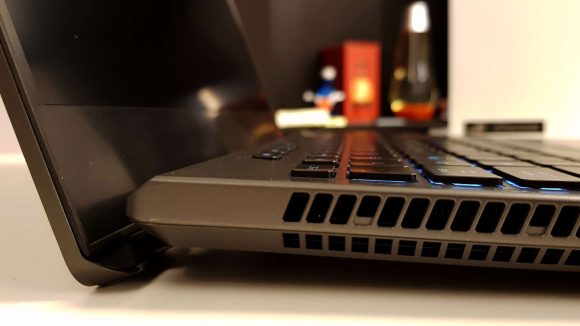 I’m a big fan of the new Zephyrus look. Ignoring the blazing LED display on the lid for a second, it’s a far more restrained look than a lot of gaming laptops. The big ROG eyeball has been shifted aside in favour of a simple logo plate on the bottom left of the lid and the simple outline of the frame is a far cry from overly angled Asus gaming machines of past times.

The new ROG Zephyrus G14 laptop will be released in March 2020, though we’re still waiting on pricing to be confirmed for the wee machines. But we can’t wait to get our hands on one again, after having the prototypes in our offices late last year, and again at CES this year.