It’s bizarre because the Radeon Pro 5300M that Apple’s got has just 20 compute units, while the RX 5300M GPU comes with 22 compute units. Yay, us PC gamers get one over Apple… except no they still get the full Navi 14 with 24 CUs that doesn’t seem to be coming to PC.

And that makes me worried for the expected RX 5500 XT card that’s due on our desktops before the end of the year… it’s looking increasingly likely that’s just going to be another 22 CU part but with 8GB of GDDR6.

You will, of course, find the GPU ‘Game Frequency’ – or whatever it’s being called at the time – being higher on the different SKUs of the RX 5300, RX 5500, and RX 5500 XT graphics cards, but in actual silicon terms the only point of difference will be in how much VRAM is jammed onto the PCB with each GPU.

The listing for the RX 5300M has appeared on AMD’s own site (via @momomo_us) and some further digging, matched up with some Linux driver leaks, and the specs given to the press by AMD at the initial pre-briefing about the RX 5500-series, seems to confirm that there isn’t going to be a full Navi 14 GPU hitting the PC. It looks like it will indeed be limited to Apple’s MacBook Pro 16 laptops. 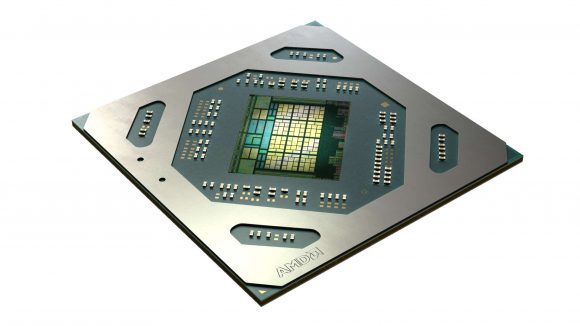 The following SKUs of the Navi 14 GPU were added to a recent Linux driver patch, and we can now be pretty confident what all but one Navi 14 SKU matches up to.

Basically it looks like the entire PC lineup for both the mobile and desktop RX 5300 and RX 5500-series cards are hewn from the exact same GPU. The only difference being the clock speed and VRAM allocation.

AMD listed the ‘up to’ specs for the desktop RX 5500-series as 1,717MHz and 8GB, yet the listing on AMD.com for the RX 5500 currently only points to 4GB and a Game Frequency/Game Clock (AMD changes what it’s called depending on who writes the list) of 1,670MHz.

That leaves a lower-spec Navi 14 XL desktop part, which it now looks like ending up as an RX 5300 card, though surely AMD wouldn’t hobble that with just 3GB of VRAM, would it?

So, why has this been a silent launch? It’s looking more and more like AMD is backing away from the 5500-series launch, potentially ceding the mainstream market to Nvidia, or just leaving Polaris to keep the Radeon flag flying.