A new AMD Navi 12 GPU has been spotted on the Compubench database, seemingly confirming some of the rumoured specs of the AMD RX 5600 XT. It’s rocking 36 RDNA compute units (CUs), suggesting that the new Radeon RX 5600-series card will appear with the same 2,304 cores as the AMD RX 5700 GPU released last summer.

Originally it was assumed that the RX 5600 XT was going to appear sporting a cut down version of the Navi 10 GPU, with fewer cores than the RX 5700 but more than the Navi 14 chip’s 1,408 cores. But recent leaks, primarily from add-in board (AIB) partner, ASRock, have suggested that the new Radeon will be shipping with the same core count as the lower spec 5700-series card, but with lower clocks and a different memory configuration.

But one of the oddities of this latest Compubench leak, as found by Komachi (via Videocardz), is that the memory config on this version of the Navi 12 GPU is 8GB. That flies in the face of all the RX 5600 XT rumours which have that card pegged as a 6GB option and nothing else. Maybe there’s an RX 5600 XTX with 8GB just to make AMD’s new GPU naming scheme even more confusing… 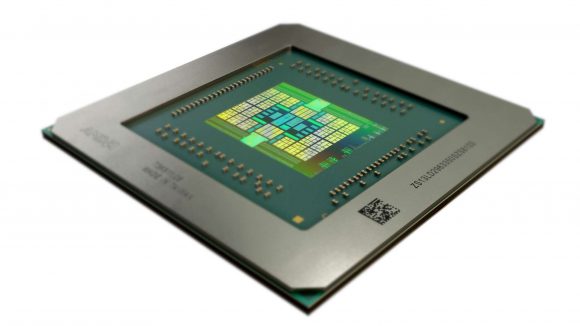 The ‘gfx1011’ shown in the database listing has already been outed as the codename given to the Navi 12 GPU, with the Navi 10 chips being known by the ‘gfx1010’ moniker. The fact that it’s listed as having 36 CUs seems like too much of a coincidence for it not to be the GPU being used in the upcoming RX 5600 XT.

Which still seems kinda baffling to me. Having a lower-caste card with the exact same core count as the RX 5700 feels like a bizarre move, but if there’s one thing that unlocking the RX 5700 has taught us it’s that the core counts of the Navi architecture have less relevance to actual GPU performance as high clock speeds and powerful memory.

With the RX 5600 XT likely to have lower specs in both regards it will sit comfortably below the RX 5700-series offering AMD a mid-range GPU to rival Nvidia’s GTX 1660 Super.