Intel has announced its first data centre Intel Xe GPU: Ponte Vecchio. Announced at the Supercompute ‘19 conference, the 7nm GPU is the first officially named Xe graphics part from the company and will be launching in 2021 as a part of the Aurora Supercomputer for the US Department of Energy and Argonne National Laboratory.

Announced by Raja Koduri, (inhale) Intel chief architecture and GM of architecture, graphics, and software, during the HPC conference in Denver, the Ponte Vecchio GPU is the first “microarchitecture” under the Intel Xe umbrella that we’ve heard official word about, despite it launching the year following Intel’s 10nm yet-unnamed GPU in 2020.

Intel’s utilising a single architecture and single API with its forthcoming discrete graphics card tech. That means the underlying tech powering its data centre GPUs – such as the Ponte Vecchio HPC-optimised GPU announced at Supercompute – will also be one and the same as those intended for our gaming PCs. Albeit with some features and functionality enabled/disabled here or there.

Some further uses specified for the Intel Xe architecture include gaming, mobile, and cloud graphics. 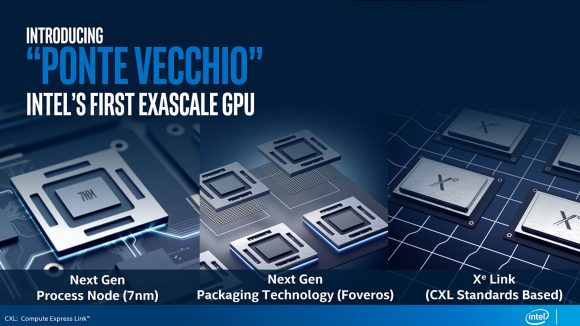 Ponte Vecchio will utilise many of Intel’s latest technologies, including Intel’s stacking technology, Foveros; the 7nm process node; and a new interconnect called Xe Link, which is based off of the standards for CPU-to-Device and CPU-to-Memory interconnects laid out by the Intel-founded CXL consortium. That’s the same group that both Nvidia and AMD have since joined, and will inevitably prove key to HPC performance required by today’s exascale supercomputers.

“We are not disclosing today all the details on the construction of Ponte Vecchio,” Rauch continues. “But you can assume that this device takes advantage of all the latest and greatest technology from Intel: 2D/3D memory technology all in place. I cannot confirm, but there’s a lot of technology packed into this amazing device” 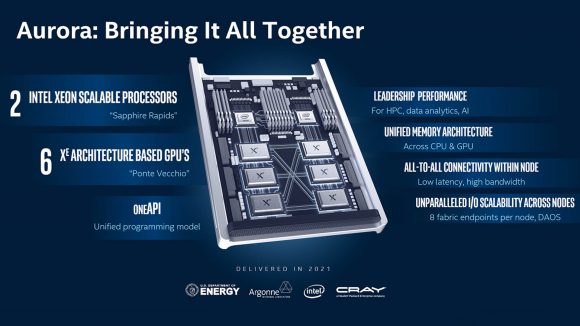 Intel Ponte Vecchio will make its first appearance within the Aurora supercomputer for the US DoE and Argonne National Laboratory. The exascale supercomputer, built with Cray, comes in at over $500 million, and features the entire Intel hardware and software stack – from Xeon to Xe.

Intel also announced it’s officially launching its OneAPI initiative. OneAPI is Intel’s answer to heterogenous computing, and the growing need for GPUs, FPGAs, and CPUs all tied together. OneAPI links these separate nodes with a unified code base and language, and it’s built on open standards to ensure compatibility beyond Intel’s own tech. Intel’s OneAPI rendering toolkit also powered the ray tracing implementation in World of Tanks, EnCore RT.

Nvidia’s CEO, Jen-Hsun Huang, has been sceptical of OneAPI’s utility, once saying “programming isn’t as simple as a Powerpoint slide.” Considering OneAPI steps on the green team’s quite a bit, the shade is rather expected.