The real beginning of Star Wars: The Rise of Skywalker happened in Fortnite

Minor spoilers covering the first five minutes of Star Wars: The Rise of Skywalker will follow, so keep your head down if you’re still on blackout. A pretty significant plot detail happens before Episode IX even starts, and your only clue about it is the first line of the opening crawl. There actually was a way to see that galaxy-shaking event, though – you just had to be playing Fortnite.

“The dead speak!” As Rise of Skywalker’s opening crawl reveals, “the galaxy has heard a mysterious broadcast, a threat of revenge in the sinister voice of the late Emperor Palpatine.“ The film opens as Kylo Ren sets off on a quest to find the source of Palpatine’s voice, and that incites the space opera action to follow.

For Star Wars fans, it might seem a bit weird that an event as significant as ‘the voice of the dead Dark Lord of the Sith echoes across the galaxy’ is never seen, but it actually happened in Fortnite. At the close of the Star Wars sneak peak this past weekend, Palpatine – voiced by Ian McDiarmid – let his message out to crowds of Fortnite players. 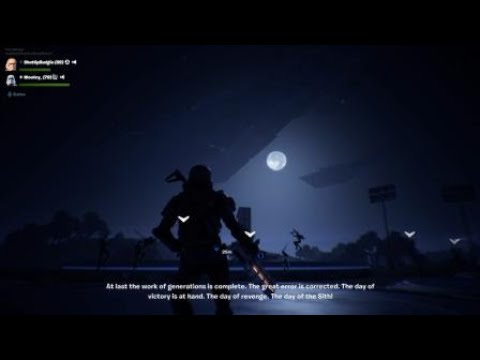 It’s unlikely that this plot point was planned from the start for a Fortnite event. As Polygon notes, the most likely scenario is that Palpatine’s line hit the cutting room floor as director J.J. Abrams made an effort to trim some exposition.

But it’s still absolutely bizarre that a plot event in one of the biggest films, well, ever only shows up in Epic’s battle royale. Who knows, maybe some other multiplayer games will offer limited-time events where Thanos comes back to life or something. Who knows?