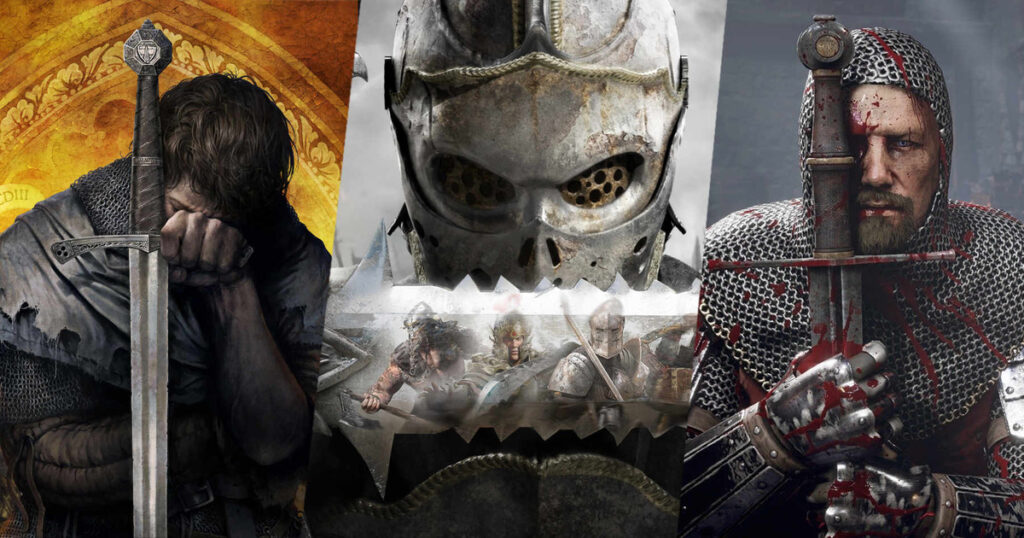 Check out our selection of the best sword fighting games if you appreciate a sound combat system.

For many players, the moment they truly feel like the protagonist is when they handle the swords. It’s hardly surprising; what is more satisfying than hordes of monsters starting to drop like flies? The melee combat in PC games is implemented in many ways.

Some fighting systems are treated as just another gameplay element, but some developers took it to the next level, creating an extraordinary experience. If you’re looking for titles that take combat seriously, you’ve come to the right place. Here’s our list of the best sword fighting games.

Our lineup features a selection of games with the best melee combat. Many titles focus on PvP, but we took care to include single-player productions as well, so all of you can find something for yourself.

Let’s start our list of PC games with great sword fighting with a classic. Star Wars: Jedi Knight: Jedi Academy lets players feel like they’re starring in another entry of the movie franchise. They can design their character as well as the lightsaber.

Speaking of this iconic weapon, the game’s combat is super enjoyable, especially considering that you learn more combat styles and abilities as you progress. Add force powers to the mix, and you get one of the most fantastic combat-heavy games.

When writing about games with the best melee combat, we couldn’t overlook Batman: Arkham Knight. After all, the dynamic fights are the hallmark of the series. The final installment of the critically acclaimed trilogy introduces new moves and gadgets, as well as the legendary Batmobile, which increases the combat potential of the Dark Knight even further.

Moreover, for the first time in the series, the game offers an open world, letting players traverse every nook and cranny of Gotham City. Without a doubt, gliding above the cityscape is a memorable experience.

And if you’re looking for more productions inspired by comic books, here’s our list of the best superhero games.

Our list would certainly feel incomplete without Kingdom Come: Deliverance, considering it takes players to medieval Europe. It’s a real treat for fans of melee combat in games. This action RPG took fighting mechanics to the next level, striving to recreate historically accurate swordsmanship. Therefore, it’s not enough for you to strike blindly with a sword; you must dodge, feint, and block, outsmarting your enemy, to survive.

Moreover, the game features an extremely complex inventory system, giving you 20 slots for weapons, clothes, and attachments. In addition, your character has four layers of clothing or armor, so there’s a myriad of possible combinations.

Probably no one is surprised that we decided to include Elden Ring, one of the best soulslike games on the market, in our lineup of PC games with great sword fighting. FromSoftware polished the combat system to perfection, catering not only to many different playstyles but also to the varied skill levels of players. With 10 classes to choose from, a rich arsenal of weapons and tens of possible builds, everyone will find something to their taste.

However, let’s not forget that it’s still a soul-like game, so each clash demands tactical thinking, even with the weakest enemy. On top of that, over a hundred unique bosses await you, so you’re sure not to rest easy.

This title must also ring a bell to those who are fond of combat-heavy PC games. Mount & Blade 2: Bannerlord is another installment of the series that combines elements of an RPG, a strategy game, and an action game. It transports players to a semi-medieval world during an interregnum. As the ruler of one of the fractions, you must resolve the situation and make the country thrive again.

However, Bannerlord prioritizes gameplay over all else. The skill-based combat system is complex yet intuitive. Besides, you can even craft your own unique weapon, letting you decide on its appearance and properties.

Mordhau will be an excellent choice for those who prefer multiplayer games. It lets you experience massive, medieval-like battles with up to 80 players that are as fun as they are hectic. After all, who would expect to be attacked while climbing the ladder?

However, some modes allow you to fight on a smaller scale, such as duels or 3v3 team fights. That’s when the combat shines, as it’s all up to you. Each blow can bring you closer or further to victory.

And if you can’t get enough of combat-heavy PC games on Steam that focus on multiplayer clashes, you should try Chivalry 2. Compared to the last installment, this one is more dynamic due to the addition of mounts.

Moreover, the game offers four unique classes to choose from, each with a different arsenal of weapons. There are also subclasses, which introduce even more variety. It’s worth mentioning that Chivalry 2 supports all-platform crossplay, so you don’t have to worry if your friends prefer consoles over PC.

Chivalry 2, among many other amazing games, is available on PC Game Pass, a Microsoft subscription service that allows users to access an ever-growing library of titles. The first month costs only $1 for newcomers, so it’s a great deal, considering how vast the offer is.

For Honor is another title on our list of noteworthy sword fighting games on PC that offers multiplayer battles set in a quasi-medieval world. However, unlike other similar productions, in addition to hackneyed knights, it also features samurai and vikings, among others. All heroes have their own unique fighting styles and class-specific weapons.

There is also a campaign, which is a nice change for those who want to take a break from fighting other players. Overall, if you appreciate good melee combat in games, For Honor is for you.

Let’s take a break from knights and the Middle Ages and look at Absolver, a multiplayer action game with a world inspired by the Far East. Given the nature of this list, you can probably guess what the title’s main selling point is.

Of course, we refer to the combat system. It allows players to switch between four fighting styles. You have a vast arsenal of melee weapons at your disposal, but nothing stops you from relying on your fists’ strength. You can push blows, counter, parry, dodge, or feint. Although the move sets are pre-made, you can also create combos to suit your personal needs. All in all, when it comes to the top sword fighting games on Steam, you can’t go wrong with Absolver.

Without a doubt, Hellish Quart is one of the most interesting fighting games that’s currently in early access. The developers strived to recreate historical dueling as accurately as possible. For this purpose, they provided an advanced physics system and motion-captured fencing animations.

As the game’s set in the 17th-century Polish-Lithuanian Commonwealth, the arsenal of weapons includes sabers, rapiers, and broadswords, typical for the period. For the time being, it only offers local multiplayer, but a single-player campaign is in development. Overall, it’s great to see more unique takes on well-liked genres.

That concludes our list of the best sword fighting games on PC. Have you played any of our picks? When choosing a title, do you pay attention to its combat system? Share your thoughts in the comment section below!