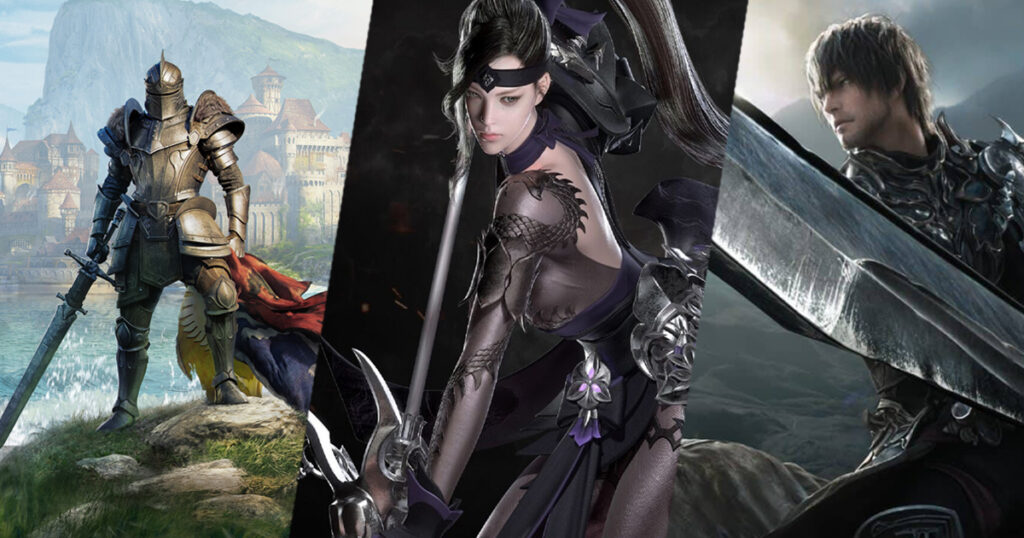 Online RPG adventures aren’t dead yet – here are some of the greatest examples of the MMORPG genre!

One would think that MMOs aren’t as trendy as they were a couple of years ago. Still, there are numerous games like World of Warcraft that manage to stay relevant long past their release date (even WoW does that to a certain extent 😉). But how would one define this genre, and what’s its appeal? Which titles should you pay attention to?

What is an MMORPG?

MMORPG (Massively multiplayer online role-playing game) is a subgenre of role-playing games that allows numerous players to play together in a virtual world simultaneously. The origins of MMORPGs date back to 1978 when the first text-based MUD (Multi-User Dungeon) title running on a private server was created.

The gameplay was based on issuing commands that allowed players to interact with the environment. Text games dominated the market for almost 20 years, as it was only in 1996 when 3DO launched the first MMORPG with a global reach – Meridian 59.

Ultima Online was released in the same year and is considered the ancestor of modern productions. On the 7th of January 1997, another significant event for MMORPGs occurred. It was when the iconic Tibia appeared on the market. We also got Neverwinter Nights, Lineage 2, and many other major titles along the way.

However, the real boom for online games did not start until 2004, with the launch of World of Warcraft, which is deemed the most groundbreaking MMORPG in history. For many years the world hasn’t seen a title that could end the hegemony of WoW. Now, it’s changed, although Blizzard’s bestseller still proudly represents the genre to this day. What else is trending now?

The most popular MMORPG games in 2022, according to MMO Population, are:

Do you see your favorites in the top 5? If not, don’t worry. We will be talking about other games in a minute. Here’s our list of the top MMOs 2022 has to offer!

For a long time, Black Desert has been referred to as the most beautiful MMORPG on the market. The debut production of the Korean studio Pearl Abyss offered the graphic design refined in the smallest details right from the release day. The complex locations and animations of the heroes’ skills were especially impressive.

The duels here are very dynamic and require players to have excellent reflexes, which plays a much greater role than the character stats themselves. Unfortunately, for this reason, the newcomers will have to be prepared for a rough start. The entry threshold is very high, but it’s still one of the best MMOs in 2022 that’s at least worth a try—especially considering the fact of how affordable it is.

Unlike the other titles mentioned in this article, Destiny 2 puts more emphasis on shooting rather than fighting with melee weapons. The cosmic story prepared by the creators of the earliest Halo games continues the plotlines from the previous title. The title stands out with its excellent shooting system, making some FPS games bite the dust. The locations are filled with powerful enemies, treasures, and many fantastic side missions, which are often superior to those available in the campaign.

Aside from the base game, there are also several expansions to consider buying, including a massive one called The Witch Queen and other DLCs that add new raids, campaigns, and gear for you to use.

Final Fantasy XIV experienced a real renaissance in terms of popularity this year. It managed to beat some of the other big titles in terms of popularity, which is evident from the list mentioned above. Many moved to Square Enix from WoW, which had been struggling with several in-game issues and problems on a corporate level. Unlike most typical games in the genre, in which you only click through subsequent dialogues, FF XIV is distinguished by an extensive and engaging storyline.

With dynamic gameplay, lots of additional content, and multiple side activities, you can genuinely start seeing this one as a good alternative for other MMORPGs. The fourth expansion pack, Final Fantasy XIV: Endwalker, was released near the end of 2021. The story told in it is the culmination of the main storyline. In addition, the DLC introduces new locations, missions, and skills for the characters.

Released in 2012, Guild Wars 2 is still very popular among players. Indeed, it is partially due to the lack of a monthly subscription (we’re looking at you, WoW 👀) and active support by the creators. Moreover, it is a phenomenal game for people who prefer to play solo and have just a bit of free time. The entry threshold is low, leveling up is pleasant, and the vast majority of activities can be approached independently.

Another expansion, Guild Wars 2: End of Dragons, debuted in February 2022 and offered a new story in the island region of Cantha, along with a range of new elite specializations. The expansion also introduced the first mount that two players can ride on simultaneously, the Siege Turtle.

After Amazon Games achieved massive success with New World, they gave us another fantastic MMO. Lost Ark is an isometric role-playing game that’s openly inspired by Diablo and other classics, throwing in a bunch of modern mechanics that have worked in other titles in the genre. The longer you play it, the better it gets. Aside from satisfying combat, you will also have a solid story to enjoy.

Adding the D&D vibes to video games generally turns out to be a great idea, and that’s precisely how it went with Neverwinter. It’s also heavily focused on player cooperation. We’re talking not only about the typical co-op aspect. You will also be able to check out quests created by other players via the so-called “Foundry” system. It’s entirely incorporated into the game rather than being a separate tool. Immersion is the key!

The title by Amazon Game Studios takes players to an alternative world inspired by the 17th-century American colonies. As any respectable MMO, New World offers enormous locations filled with diverse activities so that you’re never left with routine fighting only. Speaking of which, the arcade combat can also glue you to the screen for hours. In addition to leveling up your character, you can also occupy yourself with farming, fishing, and even expanding your own settlement.

Now that’s a blast from the past! The journey of RuneScape was certainly a long one, but it only helped build the lore and the overall character of the game. The title isn’t trying to be overcomplicated for the sake of being, which is why you will most likely find its gameplay pretty simple and relaxing. Choose your skills to master, get to know each other with the lovely community of the game, and live it up in the chill, sandbox-like world of RuneScape.

If you’ve thought that transferring the epic space-opera franchise into the world of MMOs would be really cool, you’re up for a rad session! 😉 No one’s making you pick the Light or Dark Side: you should be the one to choose your path, young padawan! Star Wars: The Old Republic offers numerous classes (and consequently, storylines) to discover and several expansions that enhance the SWTOR experience.

Also, if you’re willing to spend some cash, you can pay for the optional subscription. In exchange, you will gain access to all previous expansions and other prior goodies available for the members!

The Elder Scrolls series is not just an endless circle of Skyrim releases. It’s also ESO, or The Elder Scrolls Online, a massively multiplayer online game by ZeniMax Online Studios. The action of TESO takes place several hundred years before the events known from Skyrim. The extensive storyline is not the only advantage of this MMO. It’s a TES installment with all the combat goodness and dozens of additional hours provided by several expansions, including the recent High Isle.

Warframe may not be an MMORPG per se, although it has a bit of a Mass Effect vibe, which also leans more to the action-RPG side of things. In this F2P title, you are put in the role of a Tenno Operator. Your race can use special armor sets called Warframes, which grant you unique abilities that will come in handy during combat.

By defeating your enemies, you get XP that you can spend on your equipment with special “Mods” cards. You can even apply them to your companions or vehicles and remove the mods whenever you want. Find your perfect combination and dominate the battlefield!

During its seven years of presence on the market, this legendary title has been packed with DLCs so that you won’t get bored. Whether you’ve played it for a while now or just starting the adventure with this epochal game for MMOs, there’s enough content to keep you occupied for ages. If you’d like a new player-friendly introduction to WoW, you should consider getting the Shadowlands expansion as well.

What game can be named the best MMORPG 2022, in your opinion? If we somehow omitted a game you love, please tell us about your personal favorite in the comment section. 😊