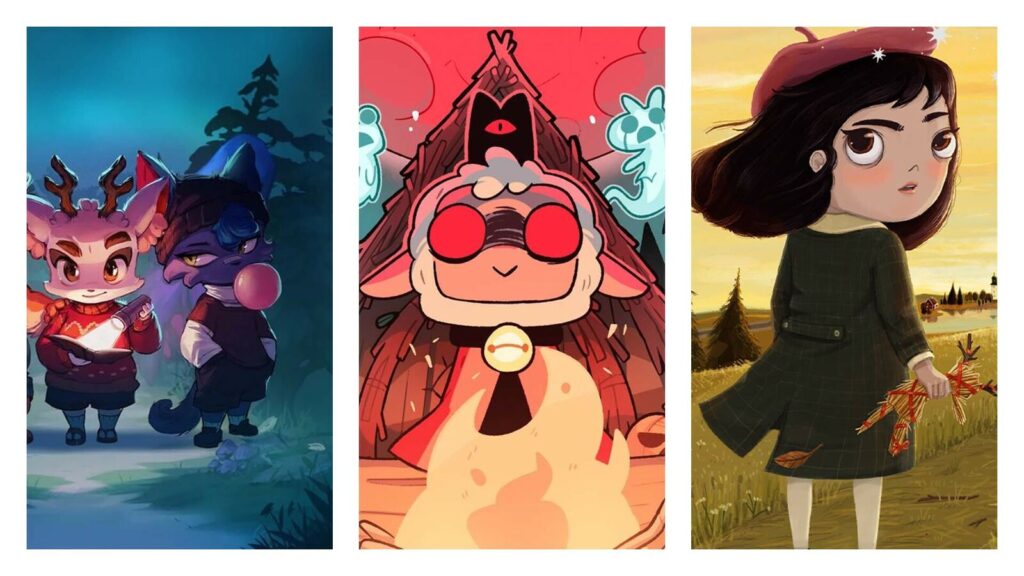 Wanna get into the Halloween spirit but are a bit of a wimp (100% guilty), or just struggle with horror games in general (1000% guilty)? No worries; I got you. Here’s a list of the best spooky games for non-horror fans.

For spooky season this year we’re doing some round ups of our favourite horror and horror-related niche things. Check the Halloween 2022 tag to collect ’em all.

Don’t get me wrong, I love Halloween, I just don’t want to have the bejesus scared outta me, you know? I like games that give me a lil bit of spooky-ookiness, but not like bone-chilling, stomach-churning, nightmare inducing, wont-sleep-for-a-week horror games. Absolutely not. You won’t find any Resident Evil or Silent Hill recommendations here! Feel safe knowing that the spooky-not-scary games you’ll find below will get you thoroughly into the Halloween mood, just without all the over-the-top violence and buckets of gore. Enjoy!

In his review, Graham referred to Beacon Pines as “cosy horror” and that’s a perfect way to sum up this eerie adventure game. Don’t let its cute animal protagonists fool you, this is a creepy story about three young friends who uncover the secrets hidden beneath their quaint town’s surface.

The catch here is that you’re not only playing as protagonist Luca, but also as the reader of the book this story takes place in. Each chapter is a new scene for you to explore, and a sketch of a tree inside the book lets you jump between different story paths to figure out its mystery. It’s a story with heart that’ll make you feel the warm fuzzies, but with an early scene having you share a dumpster with a bagged-up corpse you can imagine what other grim surprises will be down the road.

Penko Park is best described as a creepy Pokémon Snap but instead of taking photos of Nintendo’s cute critters frolicking through flowery fields or hanging out in lush forests, you’re instead snapping the strange creatures that lurk in an old nature reserve that has long been abandoned by humans. Without someone watching over the park, who knows what curiosities (or monstrosities) have sprouted up over time?

The atmosphere in Penko Park is eerie and unsettling but many of the critters you’ll meet are a friendly bunch. Singing bugs, dancing sprouts, and sprites with tiny legs and wide eyes are poking out from every inch of this overgrown region. Occasionally you may spot something hairy with long black legs scuttling in the corner of your eye but it’s never anything terrifying – just a misunderstood creature who you’ll have to coax out. It’s a creepy game but also an endearing one.

A little girl hears a voice in her head, asking her to embark on a quest in the woods in exchange for eternal happiness – a prize she plans to give to her mum. That’s the disturbing beginning of Little Misfortune, a creepy point-and-click adventure. It’s from the creators of Fran Bow so you know it’s going to be kinda fucked up.

The tone overall is pretty grim, and the story slowly sinks into unexpected darker territory, but the art, music, and voices are excellent. Also, Misfortune can throw fistfuls of sparkly glitter at will, so if it gets a little too creepy just spam that button repeatedly. Speaking from experience here.

A bunch of unsupervised teenagers exploring a haunted island, you say? What could go wrong? Oxenfree is a supernatural thriller about a group of friends who accidentally open a ghostly portal to somewhere. Strange occurrences begin to occur, and the teens find themselves caught up in a series of events linked to the island’s cryptic past of poltergeists and possession.

This one is definitely a slow burner, but the eerie atmosphere and haunting visuals will carry you through to its end. It’s all about the vibe. Ghost shenanigans aside, much of the spookiness of Oxenfree doesn’t come from the threat of toothy monsters or jump scares but from the gradual escalation of uneasiness it evokes. It’s a good ‘un.

Cult Of The Lamb

Evil spirits, creepy children, eerie anthropomorphic animals, and now twisted cults In Cult Of The Lamb you play as the titular lamb, who has been executed only to be brought back from death by a godlike being who wants you start a cult in their name. It’s a strange combination of dungeon roguelike crossed with a social sim, but the two get on like a house on fire.

Looking after your cute animal village and performing dark rituals go hand-in-hand in this game, and you’ll need to take down enemy cults who threaten your reign while also managing your own. I guess what I’m trying to say is that Cult Of The Lamb is basically a cursed Animal Crossing – perfect for the Halloween season.

Crypt Of The NecroDancer

The only thing in this game that will keep you up at night is its infectious music. Get the beat down on ghosts, ghouls, and skeletons with the power of DANCE in Crypt Of The NecroDancer. This one is definitely more light-hearted than the others on this list, as instead of getting up close and personal with the monsters and mayhem, all you need to do is decide which way to move your character on the best of the music.

It’s fun, frenetic, and can get deviously difficult but oh-so-satisfying when everything clicks and you feel at one with the music. You can also chuck in your own MP3s, so if you wanna punch monsters in the face to Darude’s Sandstorm you can totally do that. For another spooky-rythm game, Brace Yourself’s upcoming sequal Rift Of The NecroDancer is coming out sometime in 2023, so look out for that.