A pair of Gigabyte PSUs appear prone to catastrophic failure 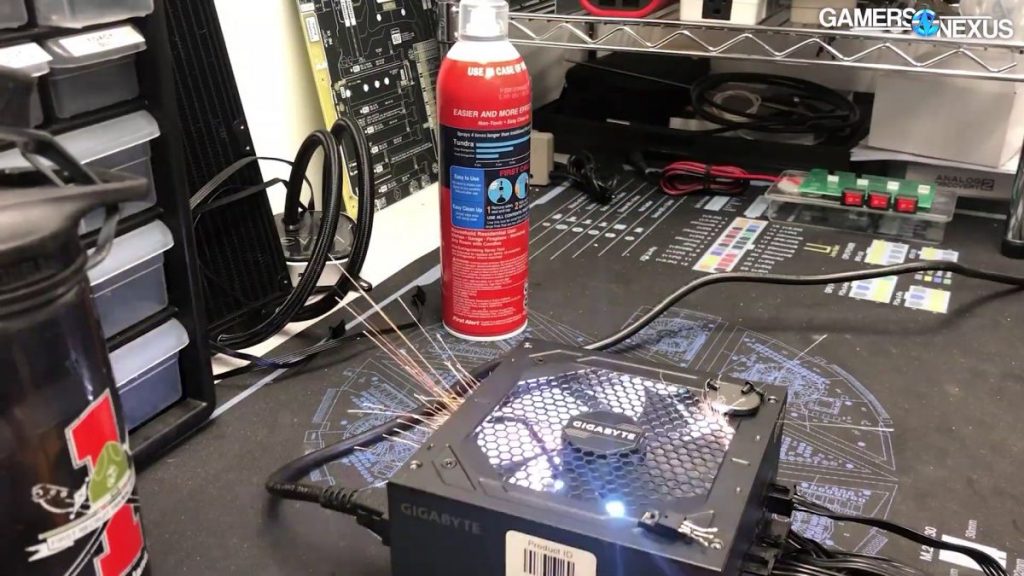 Multiple reports suggest Gigabyte’s GP-P750GM and GP-P850GM power supplies could be at high risk of serious malfunction or failure. In some cases, these PSUs have even been going out with a literal bang.

The issue was first noted by well-known PSU reviewer Aristeidis Bitziopoulos in his review for TechPowerUp in late 2020. In this review, he concludes that “Contrary to the Aorus PSU line, which was surprisingly good, this one is a disappointment…. For starters, my sample died during the over power evaluation, which is a great shame. The primary switching FETs blew up with a hell of a bang.”

He also explains the issue further in this Hardware Busters video.

An exploding PSU is about as bad as it gets. However, the sample size is also as small as it could possibly be here, so further testing is required to draw anything close to a firm conclusion.

With that in mind, Bitzopoulos tested two further 850W samples. Both of which acted as they should without error. He also tells me he asked around at distributors and found that, at least in Europe, these models don’t have unusually high RMA rates.

From this, it would be easy to assume the 850W model is a little less prone to giving up the ghost (which may be true) and that perhaps the 750W model was a poor sample. However, that’s far from the end of this story.

For one, there are other oddities or points of concern with the Gigabyte GP-P750-GM that Bitzopoulos outlines in his review. These include a high OPP protection threshold, poor quality FETs, unknown caps, a short EPS cable, and an incorrectly advertised fan.

But that’s still a far cry from exploding. It’s instead further investigation from another source which appears more troubling.

Following further reports from viewers regarding failure rates of Gigabyte GP-P750GM and GP-P850GM power supplies, Gamers Nexus also investigated the issue. It reports that 5 of the 10 units it tested failed “in an explosive capacity,” which you can clearly see an example of in its video. The surviving PSUs passed testing without issue, which also includes one power supply in an endurance test for an entire month.

Clearly not every GP-P750GM and GP-P850GM unit is immediately faulty, but those that are could have disastrous consequences.

Gamers Nexus says the PSU issue it’s experienced could stem from an issue with either OCP, OTP, or OPP. These are circuits responsible for the shutdown of the PSU when certain values are greater than the PSU is built to handle, such as high current or temperature. From its testing, these PSUs are able to run at a high value before shutting down this way, and in some cases exceed these limits before turning off.

Bitzopoulos tells me he believes that the issue ultimately comes down to bad design.

“I strongly believe that this is just a bad design, the FETs are not driven correctly and although in quick pre-checks and normal conditions the PSU can be ok, there are cases (not only under stress) where they fail. The timing of the FETs is not correct and this is due to a bad gate driver or a bad implementation.”

He also say it’s probably an easy-enough fix once identified, and expects the OEM producing this PSU for Gigabyte, MEIC, to perform a silent fix to address the issue, if it hasn’t done so already.

That still leaves existing GP-P750GM and GP-P850GM power supplies, which appear prone to higher failure rates than is the norm, at large. These PSUs have been shipped alongside graphics cards as a part of Newegg Shuffle bundles, too, and that could make for quite a few currently in use alongside the latest GPU silicon.

Gigabyte is at least aware of the issue, though we’ve not heard of any further investigation on its part just yet. Bitzopoulos informed an R&D supervisor after testing, who told him that of the five samples Gigabyte tested, all five passed OPP tests. And that appears to have been the end of that.

We’ll require confirmation from Gigabyte to be sure of the full extent of this issue, so I’ve reached out for an official response and will update this article if I hear anything back.

For now, my advice to those with this PSU installed would be to switch it out for another. It’s not an ideal solution but it’s simply not worth losing your graphics card or other components to a faulty PSU, especially while kit is so precious and prices so high.