Home » A ‘surreal’ PAX West lacked triple-A fanfare, but some attendees were happier for it

A ‘surreal’ PAX West lacked triple-A fanfare, but some attendees were happier for it 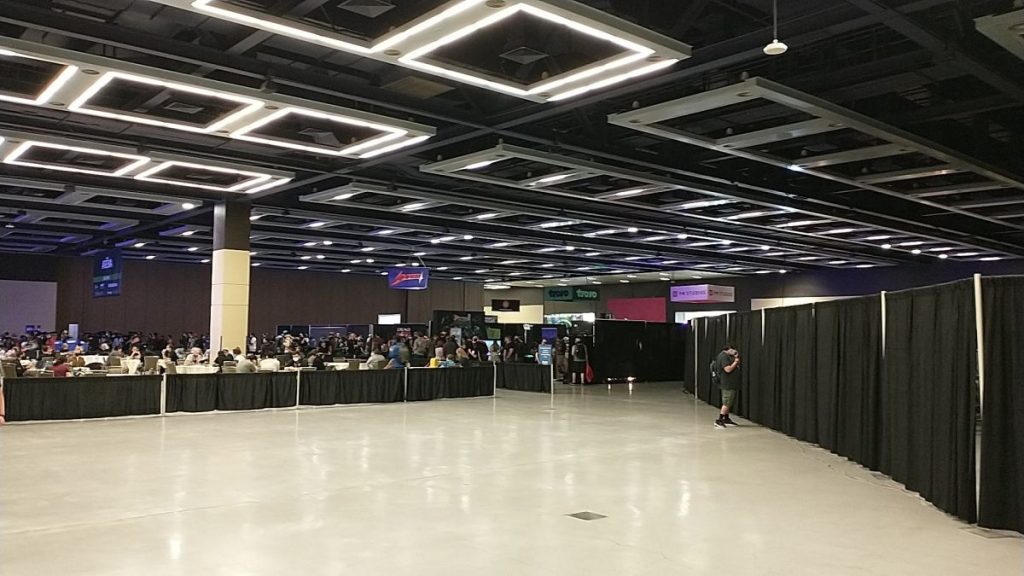 After going online-only in 2020, PAX West returned to Seattle this weekend, mandating that attendees be vaccinated against Covid-19 or arrive with a recent negative test. It’s the first big gaming event of the Covid era, and images posted on social media over the weekend highlighted empty show floors that would have been packed in a typical year.

Some PAX-goers found the event disappointing, a step down from years past. Normally the show floor would be full to the brim with booths and people, the crowds accompanied by loud music, enthusiastic announcers, and the sound of thousands buzzing over the future of videogames.

“The noticeable difference for me was walking in Friday morning,” long-time PC Gamer reader David Shea told us. “I turned to my buddy Paul and said ‘Do you hear that?’ And that was the point—it was silent. I have never entered a PAX where there was no music, no sound, no MC voice on PA speakers… and as we entered, it was immediately apparent that this would be like no other year, at least not recently.”

Shea pointed to the lack of exhibitors as a big reason PAX West felt different, noting that most of the booths were set up for selling merchandise as opposed to showing off upcoming games. There was also a distinct lack of decoration across the convention center: places where elaborate statues and massive screens usually stood were bare. That glitz and glamour largely came from triple-A publishers and developers showing off the biggest games, but this year only a couple of companies that size showed up. Bandai Namco was the largest to exhibit. But according to other PAX veterans, the lack of triple-A companies allowed other aspects of what makes PAX a great show to shine brighter.

“I had a ton of fun. It was like the old PAXes,” said Washington resident Ryan Partlow, who has been to almost every PAX West since the annual show started in 2004. “[It was] more about going to panels and playing with friends in the freeplay areas. The expo hall had a ton of fun indies, but if you go for the big triple-A stuff, I could see people being disappointed.”

Another PAX attendee, Joe Cortese, said that even though he left two hours before closing on the days he attended, he still had a good time visiting vendors and playing indie games like Cricket and Cursed to Golf. Both Cortese and Partlow also noted how safe they felt during the convention.

“PAX’s enforcers did a good job of making sure people were following all the Covid safety guidelines,” Partlow said. “I felt safe the whole time. I was in a PC tournament, Power Washer Simulator, and my mask started to drop, and they gave me a friendly tap on the back to pull it back up. So you didn’t see many drooping masks or that sort of thing—and the chairs were all spaced out.”

That was a common sentiment with everyone I spoke to: PAX West felt safe. Developers were conscious about keeping lines spread out and attendees were respectful, with enforcers there for reminders on mask etiquette and social distancing when necessary. According to attendees, hand sanitizer and wipes were also available.

Pink Gorilla co-owner Kelsey Lewin was “pleasantly surprised by mask compliance” while captaining her retro games store booth through the weekend. “I think I saw two noses total all weekend,” she said. And even though there was reduced attendance, Lewin says the store was very busy and successful at PAX West 2021.

“The event was a little surreal, but I think the reduced number of exhibitors gave smaller exhibitors a chance to shine,” she said. “I saw long lines for indie games, and there was even a line to shop at our booth! We had one of our best years yet, and a lot of the indie studios I spoke to felt the same.”

Neon Noodles developer Radu Muresan (aka Vivid Helix) said that it was one of his best con experiences, and there was rarely a moment when all three of his game’s stations—two PCs and one Switch—were unoccupied.

“It honestly felt the same to me,” Muresan said. “Still no time for anything in between chats with people just looking, or people who just played the game, or people who came back to give me ideas for the game. Overall, the vibe was so, so great. It felt like everyone was respectful and happy to be out for a show after a long, long break.

“At times it felt similar to PAX South 2017, which was a smaller event but still busy all the time. Personally as an exhibitor, I would prefer an event like this over a regular one. Had people trying the game all the time [and] there was enough room to talk to people… it still felt like PAX.”

Muresan noted that because Neon Noodles is a “niche” programming game, people would normally judge it as such and only spend a very limited amount of time checking it out. With the reduced number of attractions at PAX West 2021, he found people were willing to spend more time with it simply because of the attractive logo or its concept. He did say that because of the pandemic and the show’s diminished size there was less press coverage than usual, making it a bit harder to reach outside of the convention walls—one downside to a show that felt more intimate. But overall Muresan was very positive on PAX West this year.

Even those disappointed with the show, including PC Gamer reader David Shea, understood the difficulty in orchestrating and executing PAX West this year and don’t seem to be holding it against the organizers. However, Shea did say he was disappointed Reedpop didn’t communicate with those who purchased tickets as much as it could have.

“Days or weeks before the event they should have simply come out and said something to the effect of, ‘Hey everyone, welcome home—now let’s set some expectations; this is going to be a very different year for all of us. It’s going to be smaller and much more intimate; games will not be the focus. But we welcome you back safely and look forward to getting through this year together.’ Something to that effect would have gone miles towards goodwill instead of unfortunately leaving a bad taste in I think a lot of people’s mouths.” Shea left the show disappointed, though his—and many others’—dedication to PAX this year did not go unthanked.

“PAX did send out a thank you email after the event to anyone who had bought tickets this year, saying that they support us and appreciate us,” he informed us. “And [they] are allowing us to purchase tickets next year one week in advance before anyone else… with a 25% discount. This I feel is the right thing to do.”

Despite rocky circumstances, PAX West was at least a reprieve for many attendees aching for a break as well as developers and exhibitors excited for the exposure and business.