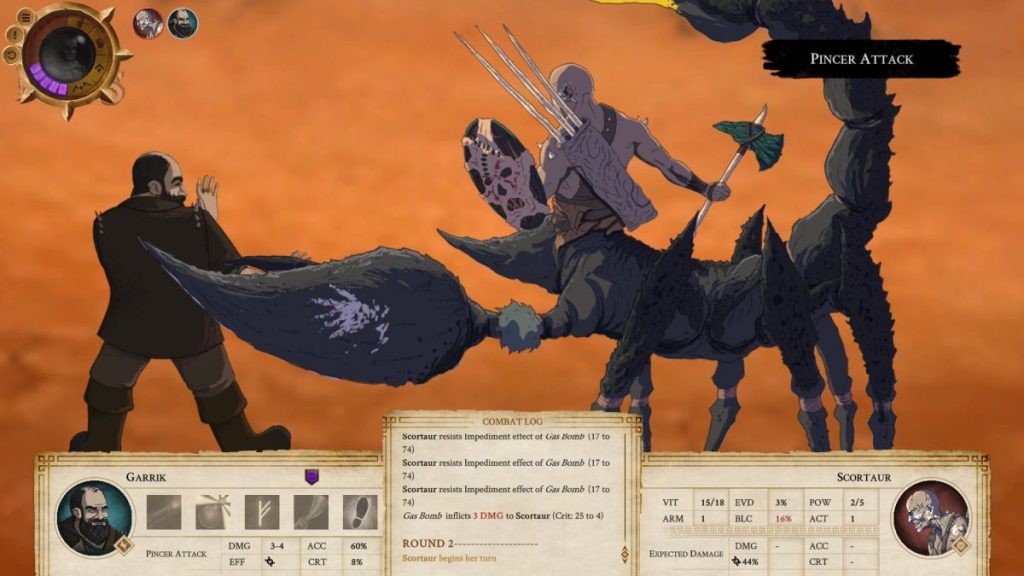 Early access RPG Vagrus: The Riven Realms will be getting a full release soon, and you’ll want to keep an eye on it on if you like unconventional fantasy worlds, steep difficulty, and reams of text.

Vagrus is one of the few RPGs that resembles a creative modern fantasy novel, with an interesting post-apocalyptic world which has been “forsaken by the gods and devastated by an arcane cataclysm”. Said cataclysm has opened a fissure for monsters to saunter through, though you’ll also contend with bandits as you explore the bleak wasteland, as the leader of a travelling company.

While exploration takes place on a node-based world map, zoomed out to the cartographer’s perspective, the turn-based battles are side-on, homing in to show the combatants thwacking each other. When you’re not fighting frightening scorpion men and other mutants, monsters and brigands, you’ll need to manage and sustain your crew, who insist on being paid and fed for their trouble.

Vagrus will hit version 1.0 on October 5, at which time regional pricing will also be implemented. There’s no word on how the release version will differ from the early access one yet, but we do have a new trailer, courtesy of IGN, that offers a nice overview of the game.

You can grab Vagrus: The Riven Realms on Steam and GOG, while there’s a free ‘prologue’ demo on both stores that will let you play through the opening stretch. At the time of writing, there’s also a new Gamescom demo available on the Vagrus Steam page. However, since Gamescom wrapped up on Friday, it’s possible that demo may disappear before long.