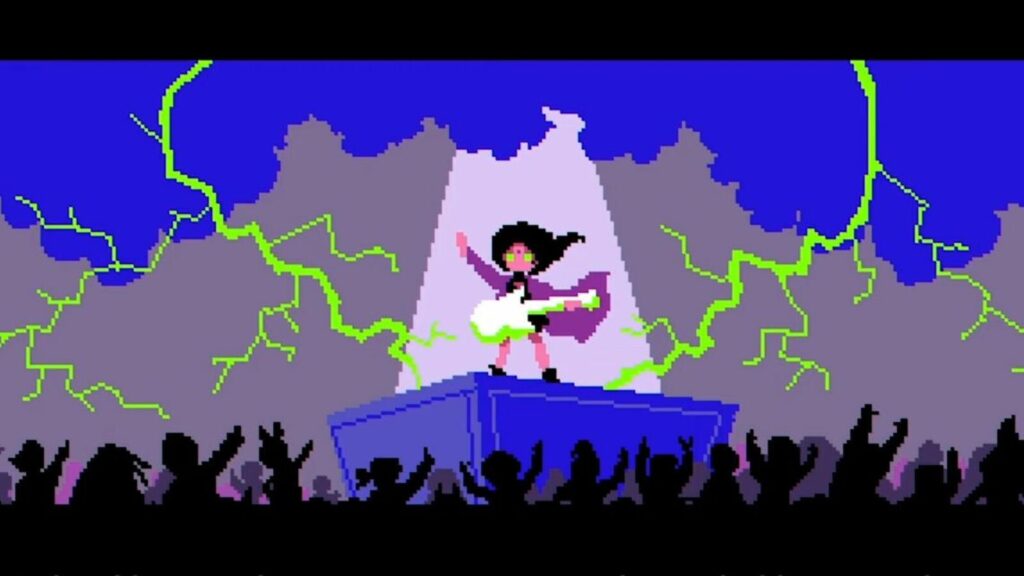 Keylocker is all about the rhythm. If you’re escaping a dystopian prison system where you can pay to upgrade to invisible handcuffs, your escape may as well have a jamming soundtrack. But you’ll have to bring your own, because the world in Keylocker hates that stuff. Like in Footloose, music is an illegal activity.


Coming to fruition after a successful Kickstarter last year, this rhythm game RPG is inspired by the likes of Nintendo’s Mario & Luigi series. In fact the rhythmic action of battles in that series, where good timing produces stronger attacks, is transplanted onto a more explicitly musical system here. The game opens with you plotting your escape from prison with outside assistance, as you download the skills of a musician representing a different class and battle style (your choice also opens up new story possibilities). From here you’re on the run, evading machines where possible while trying to hack and destroy the terminals for your escape.


It’s during battle that the musical elements really come alive in these early stages. Battles and attacks sync in time to the music while your own attacks also use your musical weapon of choice. Tapping the attack button at the right moment will boost the strength of your attack, and can be done during your enemy’s attack to reduce the damage you take.


Adding an extra layer to this is the grid system. Similar to a strategy RPG on a smaller scale, your turn can be used to move between blocks to line up attacks. By doing so, you might be able to rain damage down on multiple enemies. Considering your own position and that of enemies is crucial, as the battles begin to ramp up in terms of the number of enemies on screen.


While my time with the game was limited to just the initial scope, the game’s potential will likely come from the characters. A jukebox robot companion only joins you towards the end of the demo, and in your rebellion against the system you’ll form a whole band of musical companions to join you in the action. How battles hold up when your small fields of a few enemies grow to encompass an entire music group on presumably much larger battle arenas remains to be seen.


Much of the more eye-catching content, as well as the ability to see how different instruments affect gameplay, was unavailable during my brief time with the game. This is where the rhythm aspects of the Keylocker could really come to life, with guitar hero-like beat maps that you must execute for certain actions and a broader exploration that furthers the game’s notable inspiration from the Earthbound/MOTHER series.


Still, what was shown here at Bitsummit has potential. The pixel art stylings of the game’s visuals lend themselves well to this musical dystopia, with detailed and distinctively-styled character portraits, and smart writing giving the characters personalities beyond pixels on a screen. It’s a strong template to build upon, but how well it executes these musical elements, and the ability to alter your fate through your decisions and interactions beyond the prison walls, will determine if Keylocker can break free of the chains of expectations to become something great. There’s still no nailed on release date, but you can try a free demo on Steam now.