Home » Crapshoot: One of the strangest Bible games ever, The Zoo Race

Crapshoot: One of the strangest Bible games ever, The Zoo Race 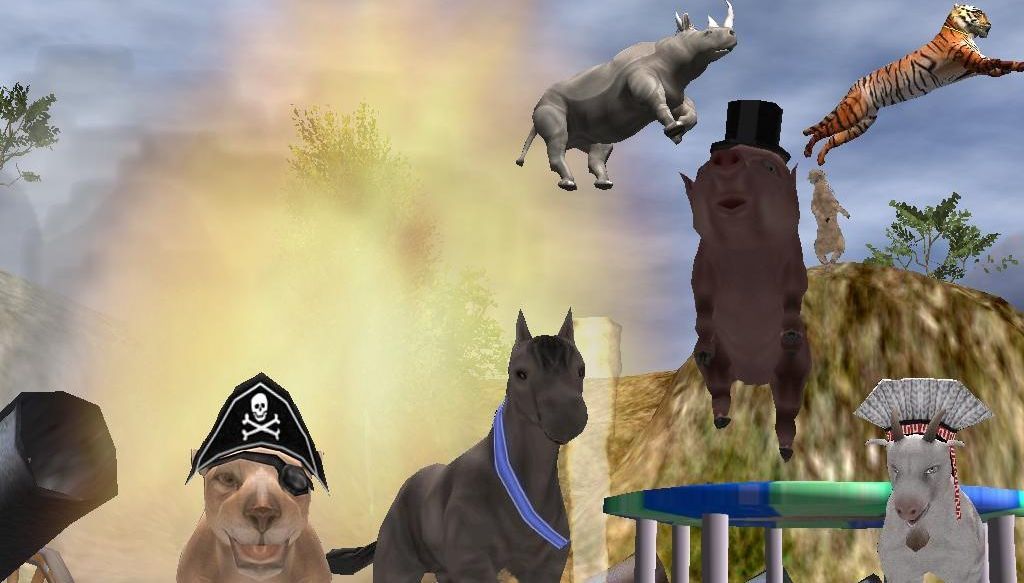 From 2010 to 2014 Richard Cobbett wrote Crapshoot, a column about rolling the dice to bring random obscure games back into the light. This week, the animals may have gone into the ark two by two, hurrah, hurrah, but only one can be first past the finish line in this arcade racer.

Believer or not, everyone knows the story of Noah’s Ark in some form or other. Oddly though, people rarely bring up what happened next—the part where the waters receded, and to celebrate, God and Noah threw a sadistic sports day that makes Death Race 2000 look like Super Mario Kart.

That is canon, right? Huh? Oh. Well, there are cannons involved, if that helps.

There must be some good, actually sane Bible-themed games out there. Statistically speaking, they can’t all be turgid and educational, or off their heads like our past friends Captain Bible and The You Testament. As you’ve probably guessed though, The Zoo Race isn’t going to break the trend.

(Not least because it wouldn’t be funny enough to include here if it did, obviously.)

Before we get to the game though, I’d better answer the inevitable question: Why pick on another Bible game, you jerk? I’ve prepared a quick clip to explain. Observe it with your pitiful human eyes.

I trust that about covers it.

The Zoo Race isn’t just one of the strangest Bible games ever, but one of the weirdest games I’ve ever seen—no qualification needed. As far as I can tell, it’s genuine in its devotion, but that really doesn’t matter. Not when you’ve seen that spinning horse, and realise that it’s absolutely nothing.

This week’s Crapshoot will be a bit shorter than usual, for the simple reason that I can tell you The Zoo Race, but I may as well just show you a video on the grounds that otherwise, you’d think I was kidding. For even more proof, you can also download the shareware version—though watch out for the launcher trying to deluge your system with more shit than God supposedly threw at Job that one time.

So strange is The Zoo Race that it doesn’t have a plot. It has two of them. In the official story, which quotes one of the biblical versions and then tacks on its own bit on the end… I quote:

After the Great Flood, Noah and the animals were very happy to be chosen to live on the Earth. Noah then declared the games of Celebration to begin. The sons of Noah built racetracks and then encouraged the animal creatures to race in them.

Quite. Those animals incidentally include a pig in a top hat called Priscilla, an apparently Viking rhino, a cougar called Cain rocking a pirate hat, and a tiger called Tamar described as simply “Lovely”. The full version gives each of them a unique world, but the shareware only offers one, Cain’s Caverns, and… hang on. This is a biblical game for kids, and it called one of its characters Cain? Was Judas the Jackrabbit not available? At least the race announcer doesn’t say “On your marks!”

Speaking of the announcer, I’m not entirely sure who he’s meant to be. It has to be either God or Noah, simply because it can’t be his one of his sons and everyone else in the entire world is dead. Either way, there’s no doubt Noah has a potentially literal hell of a lot of explaining to do.

Before I tell you about some of the specific stuff in the shareware map though, I’d like to draw your attention to the reassuring message of this screen. On the flag. You see it. Right there.

Seems innocuous enough, right? Right. Well, this is what’s waiting at the top of the same ramp.

And past that? Crushy death walls! There’s no point showing those, since they just look like blocks in the screenshot. Around the next corner though… guess! If you thought “One of Noah’s sons hurling exploding barrels!”, you are correct! And the workings of your mind worry me! Tremendously!

Some versions of the Noah’s Ark story say that after the flood, he and his family gave thanks by giving up burnt offerings. I DO NOT THINK THIS IS WHAT THEY WERE REFERRING TO.

Nor I suspect was it the jets of fire and lava pits in the next room, or cannons used to shoot the animals through the air. If The Zoo Race says anything, it’s that their experiences with the whole Ark thing gave Noah and his sons such amazing PTSD that they immediately devoted all their carpentry skills to creating a bestial version of Saw. How else can you explain this—a hall of plate glass panels the animals are forced to run through, most of which turn into solid walls when hit?

But you want to see this in action, right? Of course you do. And you’re in luck! Not only does a clip follow, showing off the racing, it also includes the full version of The Zoo Race’s… uh… second storyline. In this one, the whole thing is the dream of a librarian so boring, she actually suggests one of her visitors go and read a dictionary. If it sounds boring, don’t worry! Soon, it gets incredibly creepy!

On the plus side, we do find out that the announcer is actually meant to be God. There’s even a bit of a fight between Hannah and her friend Reuben over whether or not simply having omnipotent power over the cosmos is enough of a qualification for that job, and believe me when I say that it takes some serious chutzpah for these actors to even read those lines into a microphone.

After that, everyone is magically turned into animals! And they race! Because… I have no idea.

If you just want to see the racing, skip to 4:13 for an exciting montage. Stick out the rest though, and you’ll see production values that put even Mortal Kombat: The Journey Begins to shame.

And I do not hand out such a compliment lightly.

Greatest racing game ever? Ignore the graphics, physics, track design, premise and everything else that can be either objectively or subjectively rated, and I don’t see how anyone could argue. Here endeth the lesson. Go in peace to play something better. That, ah, probably won’t be too hard.