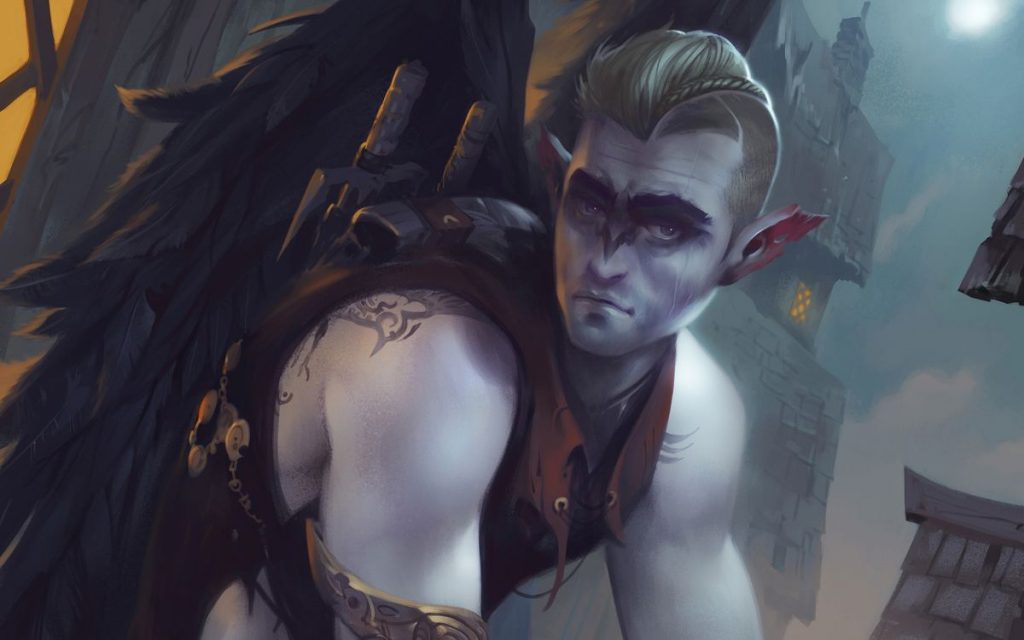 Six years on from its successful Kickstarter campaign, Crowfall has landed. The MMO built up a lot of promise during its lengthy development. It was to be part-strategy game, part ‘Game of Thrones’ style throne war simulator. Just last year, its designer J Todd Coleman (of Shadowbane fame) claimed that on launch it would be the “most strategic virtual universe,” even “surpassing EVE Online.”

So let’s just reset expectations by saying that Crowfall doesn’t hit those galactic goals. It’s a guild-based PvP game with a heavy focus on economy. You’ll be creating multiple characters that share your account name, then levelling them quickly so that they can become cogs in a machine, helping your guild gain ground in a perpetual throne war. The campaign system is novel and the guild dynamics can be compelling, but Crowfall’s world design and combat weren’t good enough to glue me to it.

Become one with the whole

Without joining a guild, you’ll soon find yourself roaming low-reward and largely empty starter zones. Crowfall isn’t an MMO designed for doing your own thing. It forces you to merge into something much bigger than yourself—adapt to it and you can have a good time. Fail, and you’ll die by way of roaming player mobs and listless boredom.

Within a guild, you’ll be expected to fit a certain role—specialised craftsman, resource gatherer, or esteemed escorter of pigs loaded with boulders to bolster keeps in preparation for scheduled siege events. You’ll still be a Warrior, Cleric, Frostweaver, and any number of original and extant fantasy classes, but Crowfall is a game where finding your preferred form of artisanship or manual labour is just as important.

Crowfall’s flumpy cartoon aesthetic is immediately evident once you begin making a new character. Here you have your classic elven variations, mythological minotaurs and centaurs, as well as more outlandish races like the statuesque Stoneborn and Elken—who, you guessed it, are humanoid deer. Though some of the races get marks for originality, the flat-textured character models lack the the little details and exaggerated expressions that make, say, World of Warcraft’s avatars so personable. They end up looking a bit plain-faced and dim, like that drooling Clash of Clans mascot you see in unwanted mobile ads.

The exception are the charming Guineceans, a race of stout guinea pig-folk who puff their chests out and rest their hands on their hips to give off a real ‘let me at ’em’ aura. I opted for the Duelist class, making him a specialist in dual-wielding pistols.

Long before you ever engage in Crowfall’s enormous PvP battles, you have to cut your teeth in the God’s Reach starting world until level 25 (in a game where the hard level cap is 35). A tutorial zone is to be expected, but here it takes a good eight-plus hours to get through its painfully-protracted questline. You learn some vital things along the way, but too much of your time is spent on uninteresting fetch quests for ungrateful and unvoiced NPCs.

You don’t have to worry about PvP or partying up until you hit 25, but that brings into relief how empty the game world feels without those elements. There are buildings and villages in the world, but no lore tidbits, chatty NPCs, or meaningful loot within them, nor are there spontaneous sidequests out in the wilderness to break up your exploration of Crowfall’s lands.

At least your time in this most purgatorial of tutorials lets you get used to the combat. It’s your classic hotkey-and-cooldown-based setup, ostensibly leaning towards a more ‘action game’ style by removing auto-attack, adding ‘reflex’ moves like dodges and jumps, and implementing a manual targeting system over traditional MMO tab targeting.

But these technicalities seem a little arbitrary when dodging has a long cooldown, your only non-hotkey weapon attack is executed by holding down the mouse button, and hitboxes are so vague that you can shoot the general airspace around an enemy and still score a hit. The combat lacks the kind of physicality we see in Black Desert Online, Guild Wars 2 or even Elder Scrolls Online.

Once you hit level 25, you can head out into the PvP wildlands of the starting world, or jump over into the guild-vs-guild ‘Dregs’ world. But travelling between worlds isn’t that simple—it involves a lot of logging out, logging in, and stripping your character down to their undies.

See, to go to Dregs you have to deposit whatever you want to take over in the bank, exit back to the game menu, spend some of a finite number of import tokens to move items into your Dregs bank vault, sign into Dregs, then retrieve those items from the vault. The same process applies when moving over to other worlds like the Eternal Kingdoms—player-made worlds that may be anything from marketplaces to guild halls or PvP arenas with custom rules.

All this makes Crowfall feel fragmented—a feeling exacerbated by low player numbers and the fact that all zones within a world are connected by portals rather than, say, mountain passes or rivers. Each area feels flat too—thin forests amidst stumbling hills, with no geologically imposing terrain. This is probably a side-effect of the fact that most of the lands are procedurally generated and disposable, getting destroyed when a campaign ends.

Which brings us onto one of Crowfall’s more interesting systems. Each world exists for a limited period of time (between a month and a year). And during that time each one goes through the seasons, starting in springtime with the map enshrouded in a fog of war as players learn the lay of the land, before progressing through increasingly dangerous seasons and culminating in a cosmic cataclysm.

Your characters survive, while guilds and factions that meet the victory conditions (mostly related to territory capture and PvP) get rewards to carry over to the next campaign. But the world, along with all the territory ownership and guild politics, dies. It’s an original way to prevent the PvP stagnating, even if there’s a certain inevitability that dominant guilds from the previous campaign will quickly establish a stranglehold over the new one. To offset that imbalance there is an alliance system, whereby smaller guilds can join bigger ones in sharing the spoils.

Dying to the Dregs

From level 25, you’re going to be spending most of your time in PvP territory, so the first thing you should do is join a guild if you ever want to see the key content of the game. After that, you can start specialising your character.

Upon levelling up, you alternate between improving your basic attributes and picking a ‘Talent’ to progress your skill tree. There’s plenty of room to experiment here. Beyond the usual mix of passive and active abilities, you go down two different layers of subclass.

Clerics, for instance, are typically healers, but you can eventually turn them into a damage-dealing Radical, a crowd-controlling Arbiter, or heal-centric Crusader. Then, at the end of the skill tree, you can specialise further using ‘Domains’ like Death, Shadow, and Music, unlocking various high-level abilities. Meta players and class tinkerers will appreciate the depth here, especially given that the journey from tutorial to PvP endgame is an unusually brisk one.

Link up with a good PvE hunting group in Dregs, and you can get from level 25 to 30 in just a few hours. PvE generally focuses around clearing villages or camps of monsters, with the occasional group or raid boss thrown in. This straightforward loop is spiced up by Hot Zones—highlighted areas where for short periods of time you can get XP boosts and better loot drops, at the risk of being ambushed by enemy players hunting for those same rewards.

The threat of PvP intervention always hangs over you in Crowfall, which is either thrilling or frustrating depending on the context. It’s great when your group fends off an ambush from an enemy group, and larger-scale sieges are always a blast. On the other hand, it’s not nearly as fun to get stampeded and looted by a player mob when you’re out chopping trees on your lonesome. Lucky for me, my plucky Guinecean Duelist has the ability to burrow underground and move undetected, making him perfect for solo harvesting and recon missions sniffing out nearby enemies.

The most significant form of progression in Crowfall is ‘Disciplines’. These replaceable stones are split into Major, Minor, and Exploration (essentially crafting/harvesting), and come in different forms of rarity that define how powerful they are. Craftsfolk should expect to spend long hours out in the wilderness chopping trees or smashing stones to get the respective harvesting disciplines, while combat-based major and minor disciplines drop off particular kinds of monsters—after a whole lot of grinding, of course.

I appreciate the ability to freely swap these in and out to find which combinations work best in given situations, such as equipping disciplines that improve your ability to maintain and use catapults during sieges, or ones that help you regenerate health on the rare occasion that you’re soloing.

Crowfall is at its best when you’re part of a well-organised guild (which I was lucky enough to find). Each land in Crowfall is speckled with forts, keeps and outposts to scrap over. While outposts can be captured any time, forts and keeps can only be contested at specific times and days.

The battles over these structures can be vast, though they do tend to boil down to those familiar PvP siege patterns of madly spamming hotkeys to drop overlapping circles of AoE abilities all around you. The vaunted manual targeting system is all but negated when you have 40-plus characters on-screen fighting each other, and it still feels like MMO siegecraft hasn’t meaningfully moved on from the seminal foundations laid by Dark Age of Camelot in 2001.

Perhaps my favourite part of Crowfall comes in the afterglow of capturing a Keep. There’s an air of camaraderie as everyone does their little part in building it back up; setting up a guild vault where players can deposit gear for others to use, erecting respawn and blessing statues, building walls and mounting trebuchets, and gathering resources for those all-important master craftspeople.

Less specialised guildmates, like yours truly, get the unglamorous task of escorting pigs loaded with resources back to camp, but the skirmishes against rival guilds that break out over these show just how important these porcine mules are.

Then, as the days count down to your new holding becoming unlocked for others to siege, this camaraderie becomes mixed in with escalating suspense among your comrades. It can all get pretty intoxicating, so long as you remain actively involved with your guild.

There’s something to be said for an MMO that’s so rigidly designed around doing your part for the collective. Players who are prepared to get stuck in, communicate plenty and sometimes sideline their individual aspirations to do some harvesting or create a character designed for meticulously balanced siege groups may well get absorbed into it. But outside of this bubble, when you’re just hunting PvE mobs or grinding for those rare Disciplines (which you spend a lot of time doing), the experience out in its worlds is so thin that the less hive-minded of us will inevitably drop off.

At its best, Crowfall is a solid PvP MMO with a good throne war system and deep character progression, but it’s lightyears away from the player-shaped EVE Online beater it was championed as.