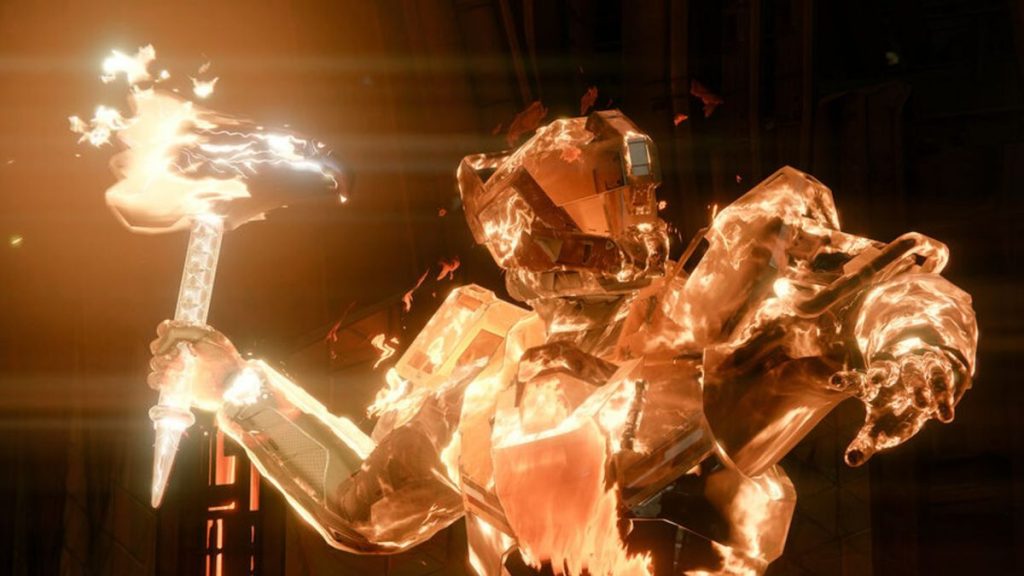 Even for this lapsed Destiny 2 player, the idea of taking on a raid boss like Riven of a Thousand Voices whilst playing solo is the stuff of nightmares. Even with the usual grind, facing such an encounter with anything less than a full team and some good luck can prove a challenge. Unless  you’re the player who’s discovered what is likely the highest DPS possible in the entire game, allowing him to nearly one-hit any raid boss to death.

YouTuber Ehroar posted his findings last Thursday, breaking down his trick. Using Destiny 2’s Sunbreaker subclass for the Titan, Ehroar equipped the Throwing Hammer, which automatically recharges melee after it’s been picked up. He also added the Burning Maul, Tireless Warrior, and Roaring Flames buff attributes for good measure. Ehroar is big on digging into Destiny 2’s numbers. We even had him make guides for eternal grenade spamming and ultimate dodging when Beyond Light released.

A normal hammer throw hit on the bounty target Shayotet Partisan will get you an admirable 21,000 damage. Buffing that with Roaring Flames will make your hammer hit for 47,000 damage, or 2.2x. The One-Two punch weapon perk then buffs damage again after hitting an enemy with every shotgun pellet, letting the hammer reach 64,000 damage. The Tractor Cannon shotgun adds another 1.3x buff. The Wormgod Gauntlets then stacks up to five buffs for every melee kill, and though it’s harder to chain, it lets the hammer hit for 160,000 damage.

OK, so buffs are buffs, but how is this guy getting multiple millions of damage per throw? Well, One-Two Punch lets you throw two hammers per shotgun shot, bumping things up past 2 million. The Throwing Hammer also has a slight delay wherein it can bounce around, and a keybind can let you surpass your normal punch for a charged melee attack.

As Ehroar explains, walk up to a boss with your buffs activated and throw that hammer, and if you’re positioned right, it will bounce repeatedly between you and the boss, dealing damage the entire time. For Riven, Ehroar simply walked up to the boss’ giant claw, threw his hammer, and destroyed well over 90% of its health bar in less than two seconds. Check the gif below to watch that health bar disintegrate.

Ehroar seems to have had moderate success reaching hammer throws of around 17 million damage on Riven, and even 40 million on Vault of Glass’ Atheon.

That’s easily the highest DPS ever achieved in Destiny 2, but even Ehroar says he doesn’t know if some future update will allow somebody to surpass it, so we’ll just have to see. Speaking of overpowered moves in Destiny 2, Bungie has disabled a pair of exotic boots that let you dance your way past enemy fire a few too many times.