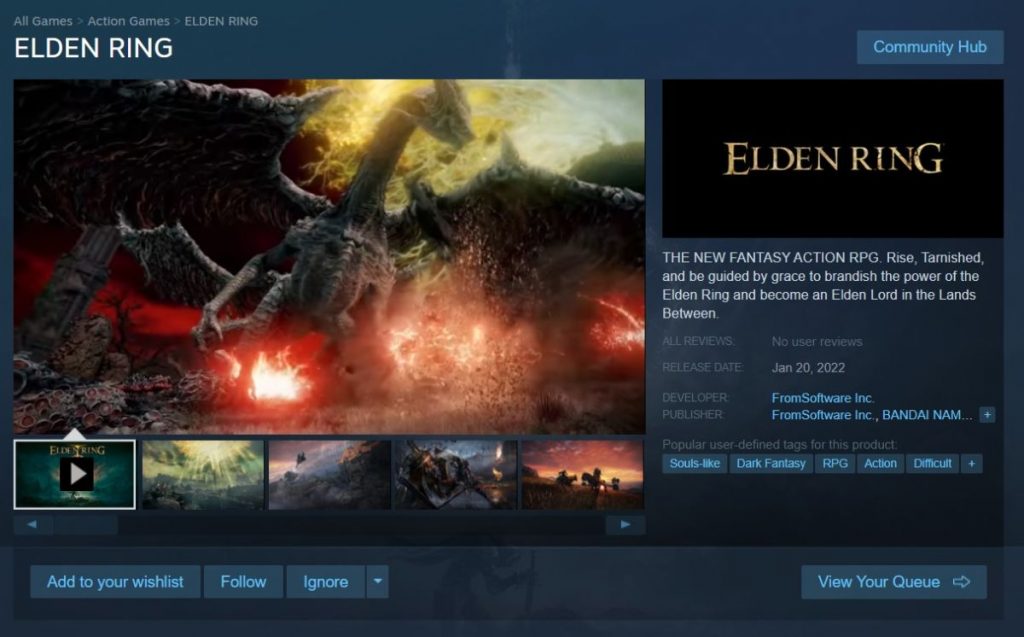 Lo, and one of the major games of 2022 hath appeared on Steam.

We didn’t have any indication that Elden Ring would be an Epic exclusive. In fact, looking back at the exciting E3 trailer, you can notice (behind all of the decayed monuments and many-limbed monsters) that the trailer footage ended with the Steam logo sitting beside a garden of other platform emblems. So we knew in June, certainly, that it would be coming to Steam. Case closed.

Still, in this continued era of Epic paying hundreds of millions to secure dozens of timed exclusives, it seemed like a possibility that the Epic Games Store could grab the rights to the biggest game of 2022. The appearance of an official Steam page this week now puts that fully to rest.

For Elden Ring’s talkative community, the Steam page has been a small milestone, another domino on the path to release, a chance for Elden Ring to climb the Most-Wishlisted charts, where Dying Light 2, New World, and Battlefield 2042 sit atop the current podium. That community, infamous for its insatiability, has managed already to playfully defile the Steam page’s tags list, tagging the action-RPG with terms like Dating Sim, Walking Simulator, Relaxing, and other sarcastic identifiers (some of which have already been stripped away). It’s a kind of christening, really. Tagging Steam games with inaccurate labels is an established tradition at this point.

Read more of our takeaways from that splashy E3 reveal, including Steven’s thought that Elden Ring “looks so much like Dark Souls and yet so unlike Dark Souls at the same time.”