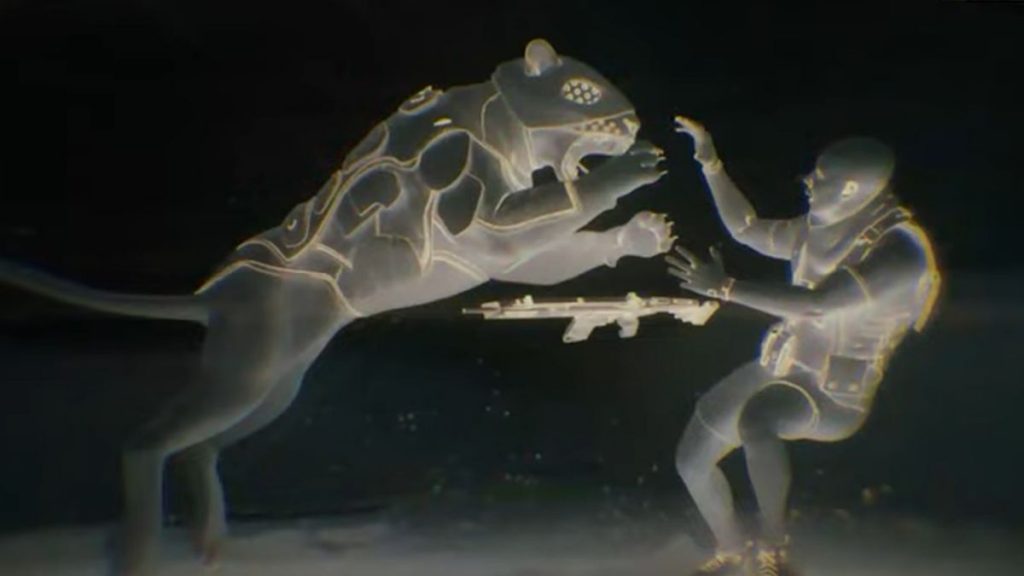 Ahead of Far Cry 6’s official launch, some content creators have discovered a secret in-game trailer that appears to be teasing something involving armored tigers and possibly other references to Far Cry series villains.

As shown by YouTuber RaptorRollGameplay, players can find QR codes on the sides of a certain pair of crates in Far Cry 6, scan them with the in-game phone camera, and watch a very brief trailer teasing some new content.

The trailer shows a cartoon revolver cylinder waving hello and saying something mostly inaudible about animals. Then the trailer flashes to a digital map bathed in red and blue, with tiny models of what I think are temples from Far Cry 4’s Kyrat. Then an image pops up of a tiger wearing some sort of armor attacking a man. Text in the upper right briefly flashes “sky temple,” which might be a reference to Far Cry 4’s Valley of the Yetis DLC, as one location there was called the Sky Shrine. Lastly, the map returns and we can see a few skull symbols dotted across it.

While some Far Cry fans think this might be teasing a whole new installment in the franchise, I think the safer bet is that these QR codes are connected to the Far Cry 6 villain DLC, which Ubisoft has previously teased in the season pass trailer. In that mode, which will be releasing in installments sometime after the base game’s release date, you take on the role of Far Cry villains Vaas, Pagan Min, and Joseph Seed in a sort of roguelike mission structure that blends what we know about each villain’s backstory with trippy reality-bending world design. Pagan Min was of course Far Cry 4’s villain, and tigers featured prominently in the fictional country of Kyrat, so it’s possible this was a quick tease of the weird brainwashed vibes of the DLC. I don’t think Far Cry 4 had tigers wearing cybernetic armor, but as we’ve seen in the season pass trailer, sharks can fly, so anything is possible.

Regardless, we’ll find out all about Far Cry 6’s fictional island of Yara and what secrets it holds when the game releases later this week. Here’s when Far Cry 6 unlocks in your timezone by region, and here’s everything we know about Far Cry 6, including gameplay details, Steam status, and trailers.