Forgive Me Father is a comic book-style Cthulu retro shooter 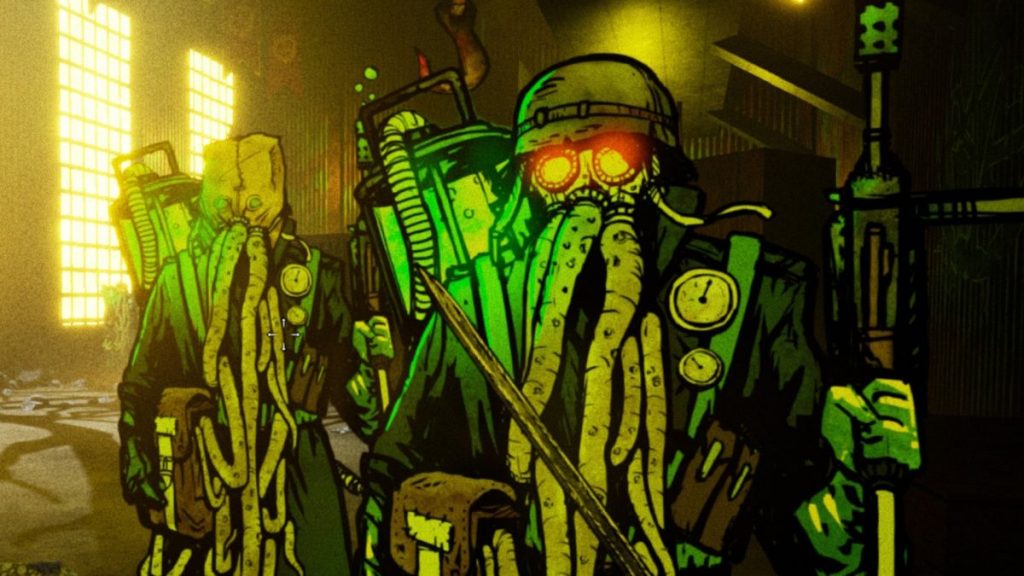 Doom-style retro shooters are getting to be a pretty common sight these days, so it takes a pretty unique approach to warrant attention. A retro shooter where you fight against the tentacled hordes of Cthulhu, all set in a 2D/3D comic book style reminiscent of XIII? And you can beat a mad scientist to death with a magical broom? Yes, that will do.

Forgive Me Father is set to debut on Steam Early Access in October, but even as an incomplete game it looks quite entertaining already. Choosing to play as either a priest or a journalist, you’ll mow down enemies that mix all the classic Cthulhu mythos tropes, like a Helghast-looking mindflayer soldier with several breathing/tentacle tubes running down their chest. Some of these tentacled guys even don nurse outfits to blend in with all the decrepit hospital beds. There’s also countless zombies, and what seems to be a normal heavyset English fellow, who’s quickly obliterated into giblets as the word “headshot” flashes in the air. Presumably, we’ll fight the Great Old One himself at some point.

What I really dig is the animations that accompany lots of these gruesome deaths. Shoot a tentacle soldier in the facemask and it will actually deflate, presumably suffocating them. Shoot the tank of green goo on their back and it’ll explode all over their jacket. It really helps sell the decaying flesh vibes that more gory adaptations of Cthulhu thrive on, and it’s all set in the familiar Lovecraft locales, like gothic universities, moonlit dockyards, and a crypt or two.

Weapons help set things apart, and aside from the obvious shotgun, machinegun, and crossbow, we’ve got tools like the holy cross, a broom that hexes enemies, a grenade launcher powered by green goo, and a throwing knife infused with dark demonic tendrils. Of course, iIt wouldn’t be a Cthulhu game without some sort of sanity mechanic, and developer Byte Barrel says your fluctuating madness will unlock new powers for either character.

Forgive Me Father is being published by 1C Entertainment, whose previous games include Ion Fury, Graven, and Deep Sky Derelicts, and will be out on October 28.