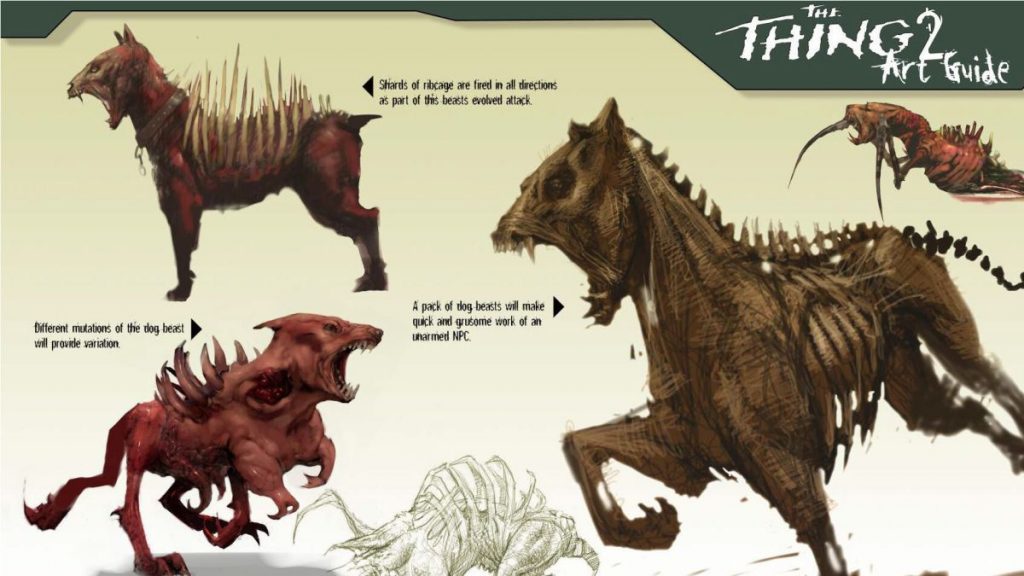 In 2002, now-defunct developer Computer Artworks ceased work on a sequel to John Carpenter’s The Thing. 20 years later, concept artist Ron Ashtiani has given us a host of gruesome monster designs that have crept in the shadows for far too long.

Planned as a survival horror follow-up to Computer Artworks’ 2002 The Thing tie-in (above), The Thing 2 would’ve seen Kurt Russel’s R.J. MacReady and prior protagonist Blake team up to fight through refinery towns, oil rigs, and aircraft carriers—facing off against deadlier versions of the alien creatures.

Posting on Artstation earlier this week, Ashtiani unloaded a wealth of concept art. The stars of the show are his creature designs—truly horrific takes on an already gross design that would see the game littered with scuttling torsos, crab-like heads, and fleshy masses blooming from helicopter wreckage.

One gory trick Ashtiani describes was a “burst out” system that would see Thing-like creature parts erupt from otherwise humanoid enemies. He marks seams where a character’s skin would split open to reveal gnawing ribs, bodies splitting in two as alien tentacles burst out and cling to walls. In 2002, it would’ve been mighty impressive.

Unfortunately, The Thing 2 was not to be. In a 2014 interview with Eurogamer, lead designer Andrew Curtis explained that the game never made it much past the prototyping stage. Rapid growth led to the studio taking on too many projects to handle, ultimately shutting down in 2003.

“It was heart-breaking when Computer Artworks closed but it was a familiar story unfortunately,” said Curtis. “We just grew too quickly, taking on a lot of projects including The Thing 2 and an Alone In The Dark sequel.”