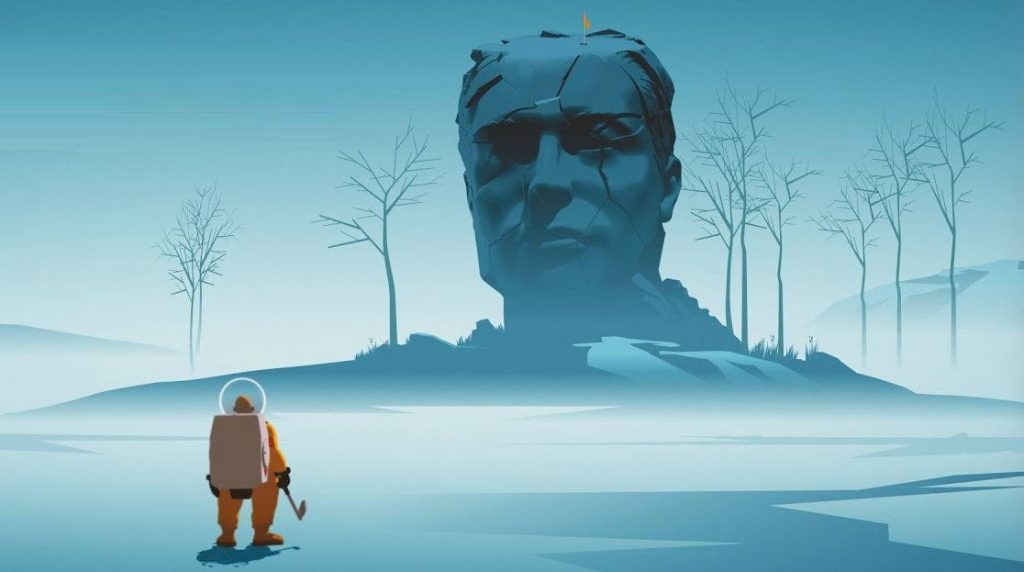 At some point in the not-too-distant future, a global ecological catastrophe renders Earth uninhabitable. Most of humanity is wiped out; the ultra-rich manage to pack up and move to Mars. And then, after taking time to settle in, they do what comes naturally: Turn the shattered ruins of human civilization into an exclusive golf course.

This is the setup for Golf Club Wasteland, and as silly as it sounds, it’s one of the more interesting indie concoctions I’ve played in quite awhile. The golfing itself is very simplistic mechanically—aim your shot, set your power, take a hack—but the course is more like a bizarre, post-apocalyptic mini-putt than any conventional 18 holes you’ve seen. You’ll play through empty parks, ruined buildings, and crumbling monuments, see (and be annoyed by) irradiated animals, and encounter occasional secrets and surprises that can help or hinder your progress.

The real hook, though, is everything that’s going on in the background. Completing holes will unlock diary entries reflecting on humanity’s exodus to Mars, while a mysterious spectator who narrates from a distance provides yet another perspective on the downfall of civilization. The master stroke, though, is Radio Nostalgia From Mars, which runs interviews with colonists, reminds everyone to stay upbeat (and follow the rules!), and plays one of the best videogame soundtracks I’ve heard in ages. Taken together, it’s a dreamy, disarming experience, but there’s a darkness to it, too: Even for the wealthy elite, surviving on a hostile planet is a harsh life.

It’s not exactly subtle throughout—one of the buildings in the background bears a large neon “Covfefe” sign, referencing Donald Trump’s infamous tweet typo, and you’ll catch a flash of “eat the rich” in the announcement trailer, a sentiment I suspect the developers take seriously—but at a little past the halfway point of the game, nothing has struck me as especially heavy-handed. And the interviews with the Martian colonists are particularly good, and even believable: There’s no finger-pointing or manifesto-like rants, just nostalgia, melancholy, hope, and loneliness.

Golf Club Wasteland is set to launch on September 3 on Steam and the Epic Games Store. Find out more at golfclubwasteland.com, and get a look at some gameplay below.