Home » Good news, everyone: You can now control the Four Horsemen of the Apocalypse in Minecraft

Good news, everyone: You can now control the Four Horsemen of the Apocalypse in Minecraft 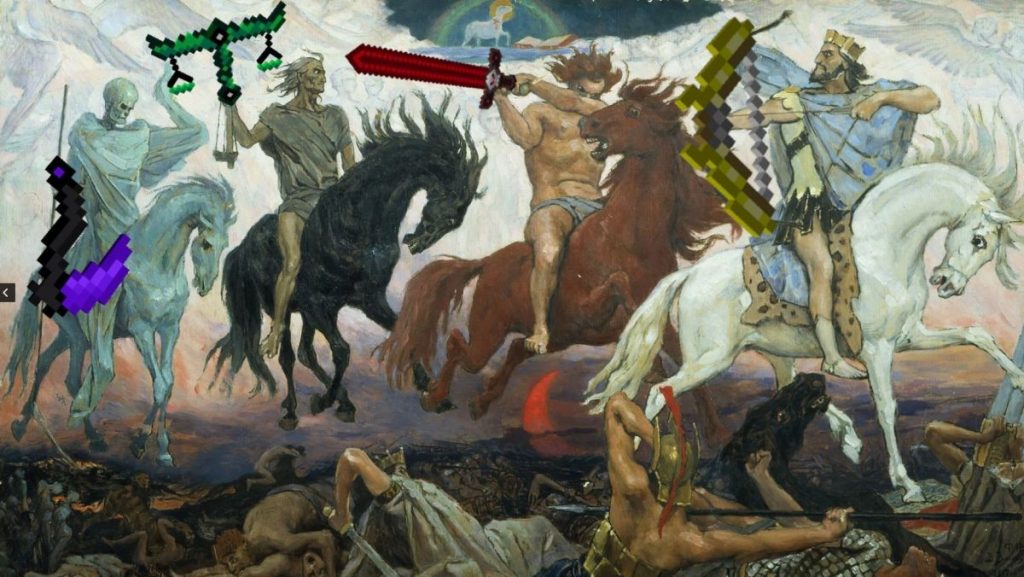 If you’ve ever wanted to cause destruction of biblical proportions in Minecraft, creator Whimzee has the exact data pack to help you out. This pack lets you take on the role of The Four Horsemen of the Apocalypse, you know, that the group of angry dudes from the bible created to rein misery down on Earth.

The data pack adds four new items into the game, each one inspired by the weapons wielded by the four horsemen (Death, Famine, War, and Conquest). When you have the item you can summon a horse that lets you use its special ability.

Conquest is a bow that fires hundreds and flaming arrows, War is a broadsword that summons three floating blades that fire lasers out of their cyclops eyes, Famine is a pair of scales that emits a green poisonous cloud that causes surrounding mobs to die from starvation, and Death is a scythe that emits dark cloud spirits that kill everything in their path.

It’s an incredibly cool idea made all the better because Whimzee has stuck to each horseman’s biblical description when creating the pack. To highlight just how powerful these weapons are, Whimzee has created a video (above) showing him beating the crap out of a menagerie of Minecraft monsters.

For more of Whimzee’s creations, make sure to check out their YouTube channel and Planet Minecraft profile. If you’re after more genius Minecraft builds, there’s been a texture pack that transforms Minecraft blocks to Lego bricks and a mod that lets you tame and ride dragons.