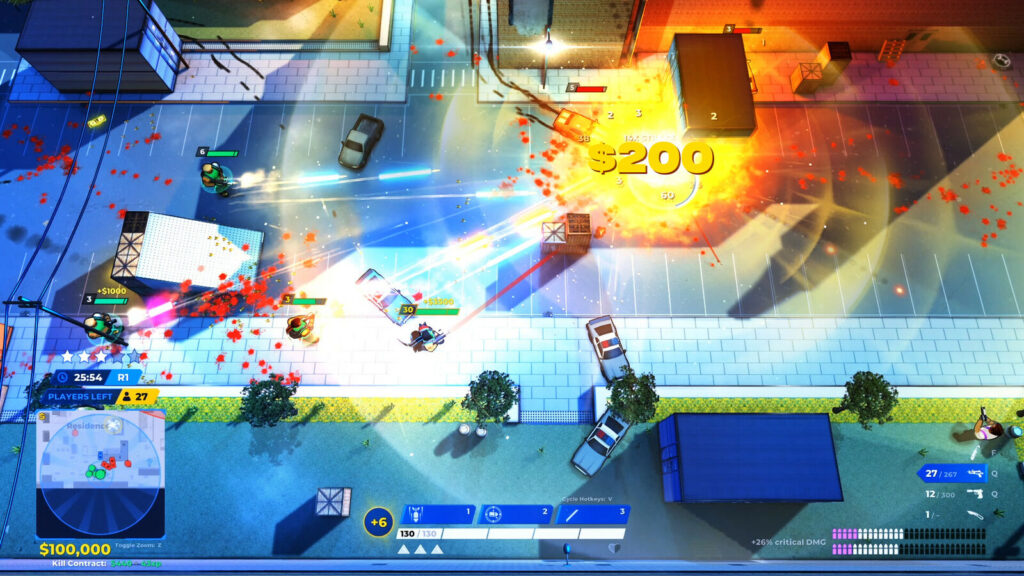 Gene Shift Auto began life as a Geneshift, a topdown, Grand Theft Auto-inspired multiplayer game which dropped into Steam Early Access in 2017. It added a battle royale mode the year after, when we were all drunk on Plunkbat. Now it’s changed name and it’s going free-to-play on November 28th.

Although Gene Shift Auto’s rounds only last five minutes, it’s not a straightforward shmup. You can progress through a skill tree over the course of a round by doing missions for NPCs, and you’ll progress quicker if you decide to bait and fight the police along the way, assuming you can survive.

The latest post on Steam goes into detail on recent changes made in the run up to going free-to-play. Those include making police swarm you in larger numbers, making skill upgrade choices more interesting as you level up, changing how you earn XP and money via killing other players, and tweaking the art style to add a “cartoony toon-shader effect”.

Switching to free-to-play also means that there will be two tiers of players in future. Those who bought the game prior to the free-to-play switch being flipped will own the ‘Deluxe Edition’ of the game, and will be granted an exclusive cosmetic and a bonus 2000 coins of in-game currency. Free players will effectively be starting from scratch.

Oddly, to make sure the divide between experienced and new players doesn’t make the game too hard for the latter, a “hardcore mode” has been added to PvP. Instead of letting new players opt-out of harder challenges, it allows experienced players to opt-in so that they do less damage to new account holders in return for a 50% XP bonus at the end of matches.

You’ll find the full changelog over on Steam, where Gene Shift Auto will go free-to-play on November 28th.