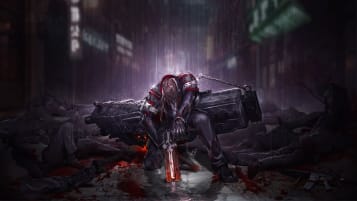 Studio Iggymob has revealed that its upcoming action title Gungrave G.O.R.E. will be available for Xbox One and Xbox Series S|X on day one for Xbox Game Pass subscribers. Gungrave G.O.R.E was first announced a little over a year ago at Gamescom 2021, with its release now just around the corner.

Business development manager Bobby Jung-Woo Park took to Xbox Wire to announce the news, saying, “It has been more than two decades since the original Gungrave was released on consoles, and now we’re back today with a chance to showcase what Gungrave G.O.R.E can look like on Xbox as well. That’s why we’re delighted to announce today that players on Xbox One and Xbox Seriers X|S will be able to play the legendary antihero badass gunslinger in Gungrave G.O.R.E on day one with Xbox Game Pass (Console, PC, Cloud) starting November 22, 2022!”

Gungrave G.O.R.E. is a third-person shooter that places players in the shoes of Grave, the Gunslinger of Ressurection, a ballsy badass who likes to charge headfirst into the action. Studio Iggymob has confirmed that the dark and mysterious experience, which will send players through twisted versions of South-East Asian countries, is expected to run about 12 hours and will feature standalone narrative.

The Gungrave series got its start way back in 2002 on the PlayStation 2, and it has since seen multiple sequels and an anime series spanning the past two decades. Despite the games largely receiving negative reception throughout the years, the franchise has managed to maintain a cult following. Time will tell if the improved visuals and gameplay promised in Gungrave G.O.R.E. is enough to finally have it appeal to the masses, though.

Gungrave G.O.R.E. releases November 22 for PlayStation 4, PlayStation 5, Xbox One, Xbox Series S|X, and PC. As mentioned above, Xbox Game Pass subscribers can play it at no additional cost on day one.