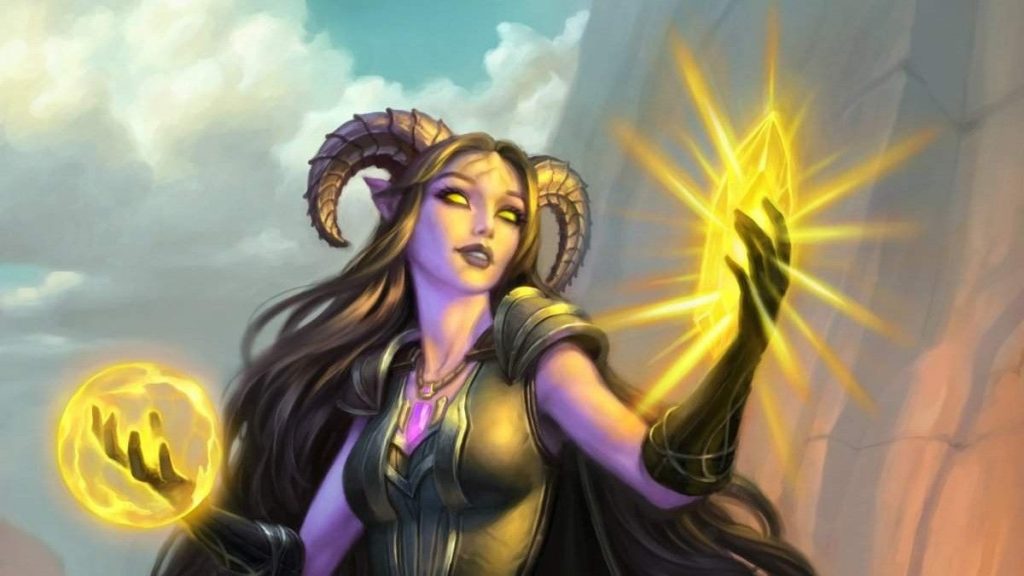 Regular readers will be aware of my contempt for Hearthstone’s Priest class. As far as I’m concerned, the degenerates who choose to main it, those players who actively seek out marathon matches in which they steal all their opponents’ cards and generally make everyone’s life more miserable, are the very same kids who pulled the legs off spiders at school. With that out of the way: check out this crazy new Priest card.

Purified Shard is a legendary spell that costs 10 Mana and reads: “Destroy the enemy hero.” That’s it. No ifs or buts. Unless they have a Counterspell in play, it’s just GG WP. But before everyone (except the aforementioned Priest sickos) collectively uninstalls, there is a caveat, and it’s a major one. You don’t actually put Purified Shard in your deck: It’s a reward from completing one of the new Questlines in the United in Stormwind expansion, which releases on 3 August.

You can watch the card reveal thanks to a typically brilliant Wronchi cartoon above, but here’s how it works: In order to acquire Purified Shard, first you need to play the Seek Guidance Questline card. As with previous Quest cards in Hearthstone, this will always begin in your hand, and costs 1-Mana. You then need to complete three steps in order to acquire the purified Shard. The first step is called Seek Guidance and requires that you play a 2, 3 and 4-Cost card. The second step is called Discover the Void Shard, which requires you to play a 5 and 6-Cost card.

Finishing each of these steps will enable you to Discover a card from your deck. These incremental rewards make sense, given that earlier this month senior game designer Liv Breeden told me, “We can give you a little bit of power along the way to help you complete the Questline… it’s less all or nothing.”

The third step of the quest is called Illuminate the Void and requires you to play a 7 and 8-Cost card. Do that and you now receive the legendary minion Xyrella, the Sanctified. She’s a 5-Mana 7/7 whose text reads:  “Taunt, Battlecry: Shuffle the Purified Shard into your deck.” So after all that work you still have to play Xyrella and then draw the dang Shard in order to kill your opponent. By my reckoning, even if you draw completely perfectly, it will cost you 41 Mana just to get the Purified Shard into your deck.

It’s unclear to me whether the eventual strat will be to use cards like Nazmani Bloodweaver and Palm Reading to manipulate the cost of your spells and speed the process up, but even if that works it’s still going to be a huge ballache to pull off. There may of course be other cards in the set that make completion easier to achieve, but it’s definitely still going to be a slog—as it should be, given how powerful the payoff is. As for whether it’s actually going to be the next big thing on ladder when United in Stormwind drops, my guess would be not. Zach O, the founder of Hearthstone analysis site Vicious Syndicate, agrees:

“It’s very slow and very restrictive. There will probably be support for it but it’s hard to envision such a linear game plan working out,” he says. “You’re very draw dependent and predictable. The deck building cost is high. The way I see it, this is a fun quest that casual players will love, which makes it good design. Cards that win the game have to be this slow. They test this kind of stuff to make sure there’s enough space for the meta to get under them.”

Mercifully, he’s right. Even the reveal video takes ages to play out! It’s also easy to draw comparisons with other flashy instawin cards like Mecha’thun and Uther of The Ebon Blade, both of which had the potential to kill the opponent from any life total but required a tremendous amount of setup. More recently, C’Thun the Shattered, which does 30-damage in a single turn (therefore ending most games on the spot), also proved too slow to really take off competitively, not that it stopped plenty of players experimenting with the cards. That’s the thing with these effects: they’re so fun to get off that people will always experiment with making them work. And meanwhile the rest of us get to enjoy killing a bunch of Priests who are playing a deck that’s slower than tectonic drift.