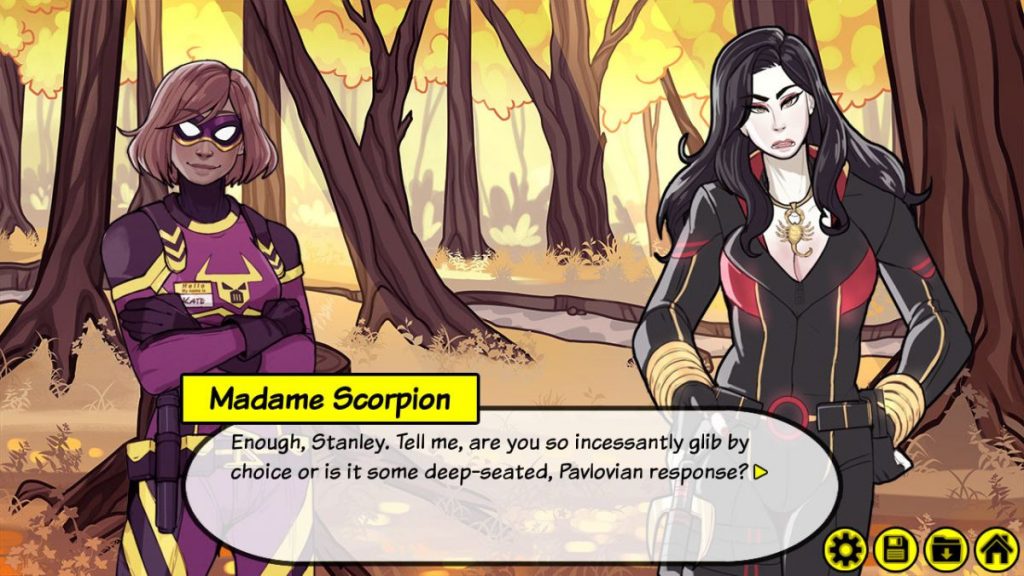 Have you ever wondered what henchpeople get up to when they’re not being battered almost-to-death by Batman, or being strung up in a big spiderweb against a police station? Admittedly I haven’t, but thankfully Henchman Story is here to fill in the gaps. It’s a superhero satire where you play as Stan, one of the henchmen for an ineffectual, small-scale supervillain named Lord Bedlam.

In this voiced visual novel, you’ll view a superhero and supervillain-filled world through the eyes of a (mostly) average joe, who signed up to work for Lord Bedlam as the benefits are actually pretty good—at least compared to life on the straight and narrow.

I’ve played a little of the updated demo available on Steam and itch.io. It’s pretty funny, if not exactly laugh out loud (Although, to be fair, I think only Portal 2 managed that for me). The professional voice acting, and writing by Marc Soskin (formerly a writer on The Outer Worlds) are assuredly to do with that. Henchmen Story has the feel of a Saturday morning cartoon, albeit one housed in a largely static visual novel engine.

Unlike most henchmen, Stan will have some influence on the world. The story will branch depending on your choices, leading to one of eleven endings. There’s romance too, if you can find the time between the inevitable superhero smackdowns.

If you’re intrigued by the villain lifestyle, know that Henchman Story will be out on October 14. Have a go on the demo while you wait.