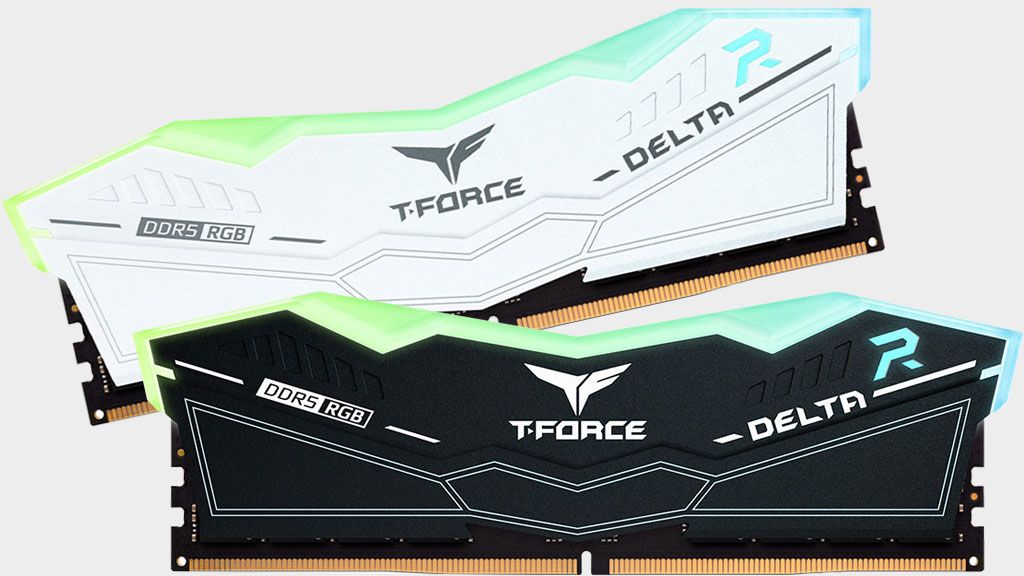 RGB lighting is practically everywhere these days, and that now includes the first DDR5 memory kits, courtesy of Teamgroup’s new T-Force Delta RGB DDR5 modules. Available in white or black trim, both color options sport wide-angled RGB edges that extend across the top and partway down both sides.

It remains to be seen if these modules end up being the best RAM for gaming in the emerging DDR5 era, though Teamgroup specifically has gamers in mind with these kits, which fall under the T-Force banner. The angled heat spreaders look a bit more aggressive than a standard memory kit that comes in rectangular form (Teamgroup says they’re inspired by stealth fighter jets), though they are not quite as edgy as Teamgroup’s Dark Z and Night Hawk kits.

“The color and flashing speed of each RGB LED used in Delta RGB DDR5 can be independently controlled, offering more freedom to customize lighting effects than a typical RGB DDR4 memory,” Teamgroup explains.

Teamgroup has sent samples of these kits to most of the major motherboard players, including ASRock, Asus, Biostar, Gigabyte, and MSI to test with their own lighting control schemes. And to that end, Teamgroup is confident gamers will have no trouble customizing the RGB effects through their motherboard maker’s lighting software.

Beyond the lighting, these kits are notable for supporting 4,800MT/s, the official transfer rate sanctioned by JEDEC and in line with some of the fastest DDR4 memory kits available today, or up to 5,600MT/s for enthusiasts who want even faster memory.

We have yet to see how DDR5 memory speeds will impact gaming and overall performance because no consumer platforms supporting the next-gen memory standard exist yet. They will soon, though.

DDR5 support will arrive when Intel launches its Alder Lake CPUs later this year, alongside a new 600-series chipset. Alder Lake will actually work with DDR4 as well, just not in the same motherboard. Then next year, AMD will embrace DDR5 memory with its Zen 4 CPUs, which will also introduce a new socket (finally retiring AM4) and chipset.

Teamgroup is keeping most of the details surrounding its new DDR5 RAM kits close to the vest, so we don’t know what the timings will look like or what kind of voltage will be required for the faster memory (1.1V is the JEDEC specification for 4,800MT/s).

What we do know is that Teamgroup will offer these kits in 16GB and 32GB capacities. Teamgroup also confirmed they will support Intel’s XMP 3.0 for one-click overclocking.

Interestingly, the warranty period is only for three years, rather than a lifetime backing, the latter of which is pretty standard among DDR4 kits. However, Teamgroup says the warranty “will be adjusted based on the improvement of raw materials or technology.”

That being the case, it’s another reason in favor of waiting a bit before building a next-gen platform. Let the early adopters deal with whatever wrinkles need ironing out (same goes for Windows 11, actually) and initially stunted warranty terms, then make the leap when things settle down. Or not—your call.