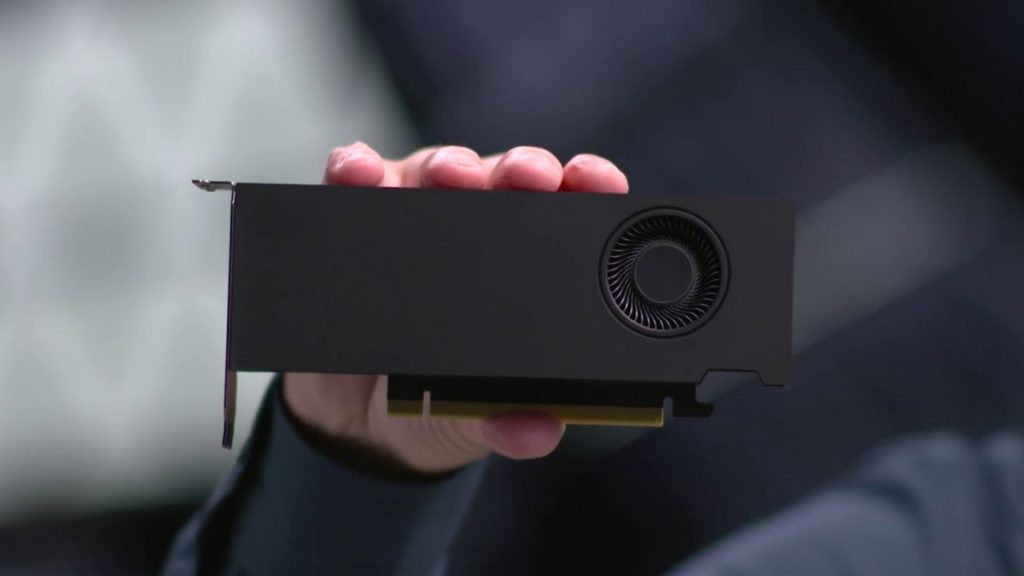 It’s not often nowadays that we end up with a GPU that’s comically small, but here we are: the Nvidia RTX A2000. It’s hilariously petit for a workstation graphics card, although one look under the hood and you’ll realise it’s because this compact card is fairly closely related to the GeForce RTX 3060.

I appreciate it doesn’t look that small without a point of reference for scale. That’s why you really need to watch Richard Kerris, VP of Omniverse development at Nvidia, show it off in this SIGGRAPH announcement.

It’s so small and cute, and I absolutely love it.

Yet while it may look like a children’s toy, this graphics card is actually only a touch behind an RTX 3060 in its specifications, which isn’t a slouch in GPU terms. Here’s what’s going on inside:

That’s only a touch off the core count of the RTX 3060, although I’d suspect the A2000 to run at significantly slower clock speeds to hit its impressively minute 70W power envelope.

The clear distinction between the two is in VRAM. The A2000 comes with just 6GB of GDDR6, which also has ECC, or error-correcting code, due to it being a workstation Quadro card. While the RTX 3060 comes with 12GB of GDDR6, sans ECC.

A workstation card with less memory than its gaming counterpart? That feels off, but I’m sure Nvidia has its reasons. Those which definitely go deeper than ‘we wanted the RTX 3060 to one up AMD’s RX 6600 XT and RX 6700 XT’. Definitely.

But back to the A2000, and I have to say I’m really enjoying this compact approach to graphics card tech. I doubt gamers are quite so thirsty for a low-power graphics card with a compact chassis, but there’s a part of me that would love to see a tiny GeForce card ready for a supremely small Mini-ITX build.

There have been a few compact, or even passive GTX 16-series and 10-series cards over the years, but nothing I’m aware of when it comes to the Ampere generation. Is it about time that changed?

The A2000 will be available in October if you are in the market for a new thimble-sized workstation. There’s no pricing information available, but I expect it will set you back a fair bit more than the $329 RTX 3060.