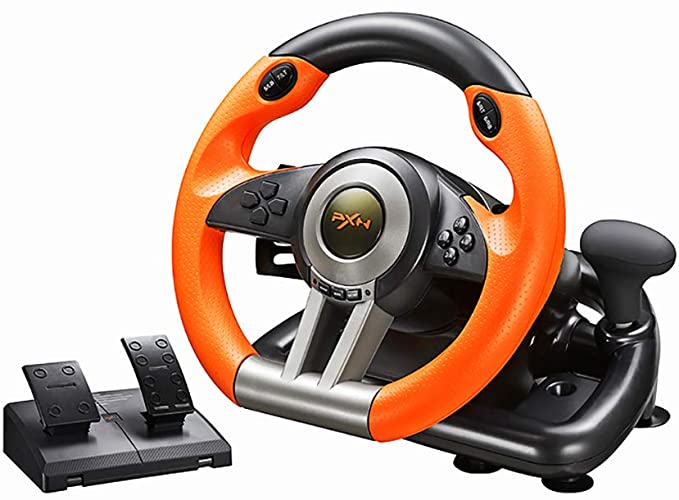 its been a very long time coming, and that time is finally here. I bit the bullet and ordered one last week and it should be in by the weekend. But lets take a step back, as a kid most of my games involved racing or just cars in general. SO naturally as a child all i wanted to complete my setup was a racing wheel with a pedal setup. The problem was, I wouldn’t have a computer to play on until about 7th or 8th grade and even then I wouldn’t have any sort of good racing games aside from the hotwheels one that came in the cereal box. My gaming rig was of course a PlayStation 1 and well, racing wheel setups did exist for them but they were quite pricy. Something that my mom would NOT be down to get me so instead I ended up with this controller. The Ultra Racing Steering Wheel Controller

This would have to do. I spent a lot of my spare time over at my friends house who actually had a racing wheel setup up until he broke it. Then it was back to the old ultra racer controller.

FINALLY my time has come, fighting the urge to just jump in and buy the Homyl PC Gaming Racing Wheel (pictured below this) i wound up getting an actual wheel. Despite how great of a deal this one was. Link to the joke wheel

Lets talk about the wheel I did buy! Though it is not a high end one I do think it will fit me well as a nice intro to the racing wheel world. the one I did buy is the PXN-V3II (pictured below this). It was on sale down from 100 so obviously this was one of the selling factors for me. I didn’t want to buy one that was wildly expensive then drop interest in it a month later, getting this one will give me a nice cheap in and from there I can decide if I want to expand and get a better one down the line. You are able to plug a controller into this one which I also think is nice, playing games like GTA will work well with that feature. Its able to work on pc, ps3, ps4, xbox360 and xbox1. Not too bad for a budget wheel if i do say so myself.

I will do a updated post when the wheel comes in on this wheel. If you want to check it out you can do so here.