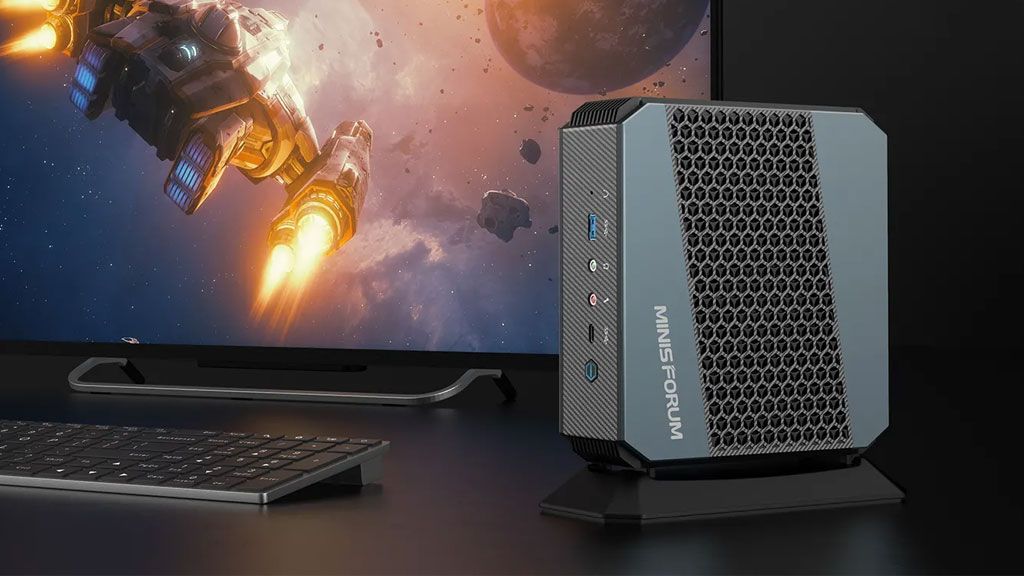 Minisforum, a maker of mini PCs, has begun accepting preorders for its EliteMini HX90, a tiny system built around one of AMD’s current generation Zen 3 processors. It’s not going to challenge the latest Beast Canyon NUC from Intel, a bigger and modular PC that can fit a full-length discrete graphics card, but it is an interesting item nonetheless.

Part of the appeal is that mini PCs based on AMD hardware are relatively few and far between. I wrote about just two of them last year—ASRock’s 4X4 Box systems powered by AMD’s Ryzen 4000U series APUs, and a similar product line from Asus, the Mini PC PN50.

The EliteMini HX90 taps AMD’s latest CPU architecture in the form of the Ryzen 9 5900HX. That is an overclockable 8-core/16-thread chip with a 3.3GHz base clock, 4.6GHz max boost clock, and 16MB of L3 cache. This is one of the fastest mobile APUs in AMD’s product catalog, the same as found in the highly praised Razer Blade 14, which Dave James called “the most desirable gaming laptop” he’s ever reviewed.

As it applies specifically to gaming, the big caveat with the EliteMini HX90 is that it leans entirely on integrated graphics. The 5900HX wields onboard graphics based on Vega with eight graphics cores clocked at 2.1GHz.

A discrete GPU would offer a lot more firepower for gaming and graphics. For less demanding games, though, it’s certainly serviceable. It’s even able to hit the 60 frames per second mark in certain titles. According to Minisforum’s own benchmark data, it averages 60 fps in Apex Legends, 77 fps in Counter-Strike: Global Offensive, and 68 fps in Need For Speed Hot Pursuit, to throw out a few examples.

More demanding games will tax the integrated graphics, though. For example, Far Cry 5 (which is free to play this weekend, by the way) is said to average 36 fps on the EliteMini HX90, while The Witcher 3 only musters 30 fps. It’s not mentioned what graphics quality settings Minisforum used, only that these were obtained at 1920×1080.

As an all-around workhorse, the EliteMini HX90 looks more intriguing to me. It features a pair of SO-DIMM slots supporting up to 64GB of DDR4 memory, a couple of 2.5-inch SATA 6Gbps ports, and an M.2 socket to install a speedy SSD.

Wireless connectivity options consist of Wi-Fi 6 and Bluetooth 5.1. On the wired side, it offers up a pair of HDMI outputs, two DisplayPort outputs, two line-out jacks, a 2.5Gbps LAN port, five USB 3.0 ports (Gen 1), and a USB-C port. There’s also a button to clear the CMOS.

This is all packed in and around an attractive (from the press photos) carbon fiber chassis measuring 195 x 190 x 60 millimeters (7.68 x 7.48 x 2.36 inches) with a VESA mount to slap it on the back of your monitor or on the wall. Cooling chores are handled by a “premium liquid metal compound” on the CPU, with a single fan blowing air.