Home » LG made a soundbar especially for gamers with RGB, built-in mics, and a $500 price tag

LG made a soundbar especially for gamers with RGB, built-in mics, and a $500 price tag 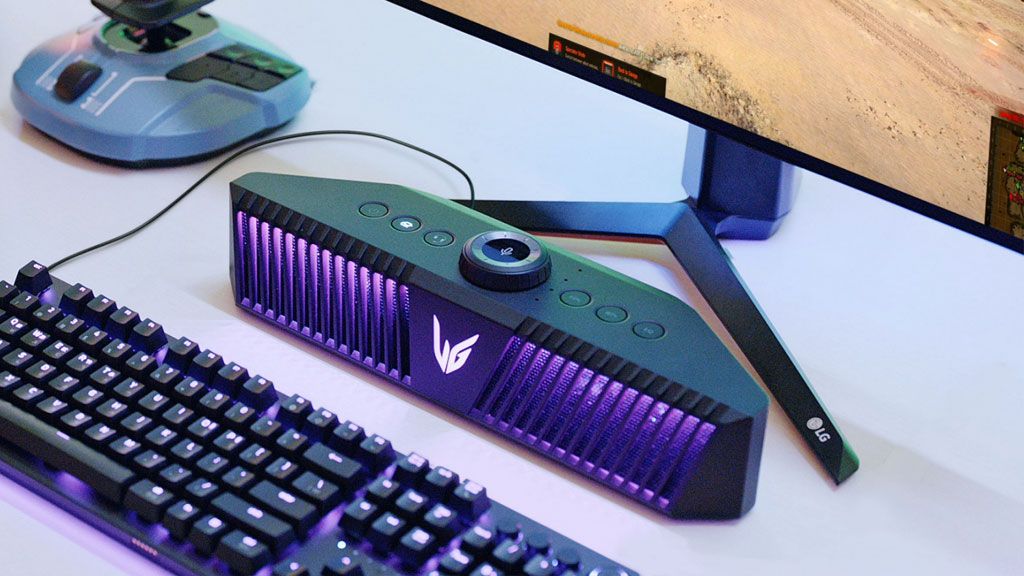 LG has officially stepped into the gaming audio market with its UltraGear Gaming Speaker (model GP9), essentially an RGB soundbar built specifically to pump out audio when playing games. A cursory glance of the specs and features reveals a promising product, but is it worth the $500 MSRP?

Apologies for the tease, but that’s a question I can’t answer until if/when I get to spend some hands-on time with the speaker, or one lands at PC Gamer for a formal review. In the meantime, I can offer up some thoughts about the soundbar’s design and claimed capabilities.

The soundbar sector is a new area of interest for me personally, having just recently retooled my home theater setup from top to bottom. That includes the audio setup—I ditched my Denon surround sound receiver and 5.1 speaker configuration for Samsung’s HW-Q950A, an 11.1.4-channel soundbar with Dolby Atmos. In a home theater configuration, there is a certain appeal to the simplicity of a soundbar setup.

I’m not sure that same appeal translates over to the PC, where I imagine most gamers either don a set of headphones or get their audio from a 2.0 or 2.1 speaker set. Without a discrete surround sound receiver, neither option is particularly cumbersome.

Interestingly, part of LG’s pitch for its GP9 soundbar is that it is a “superb sounding product that frees users from headphones, a key component of the gaming experience that gamers identified as inconvenient and uncomfortable after marathon gaming sessions.”

Dedicated speakers (including soundbars) and gaming headsets are two different categories in my mind, but to LG’s point, the GP9 boasts built-in microphones aided by what the company claims is a “unique echo-cancellation algorithm.” This is supposed to suppress background and gaming noise, and highlight the user’s voice.

The GP9 connects to PC and some consoles by way of an included USB Type-C cable. It also offers up an optical port, an auxiliary port, and a 3.5mm jack. So go ahead and keep those headphones, you may want them for when the competitive chatter veers off into crude territory. Bluetooth is supported, too.

The soundbar is driven by a pair of 20mm tweeters and a couple of 2-inch woofers. It also sports a Hi-Fi Quad DAC (ES9038PRO), which is promising, and offers DTS Headphone:X support and some kind of proprietary mojo based on a specially crafted HRTF (head-related transfer function) algorithm that’s supposed to create a 3D sound field.

There are several buttons on top of the soundbar, as well as a volume dial. Two of the buttons let you switch between FPS and RTS modes, each with custom sound profiles for their respective genres. There’s also an EQ button to tune the speaker for specific games, and LG says you can share EQ settings with other gamers through the companion app.

LG’s soundbar comes with an AC adapter, and while the company doesn’t really focus on this much, it is also a portable speaker. The specs sheet highlights a rechargeable 2,600 mAh battery that’s good for our up to five hours of usage. Or six hours, as LG’s main product page and spec list don’t seem to agree on this metric. Either way, it’s a neat perk that gives the soundbar added utility.

I’d suggest waiting for reviews, but if you’re willing to take a flyer, the GP9 is available now at B&H Photo. There are also listings on both Amazon and LG’s website, presumably with stock arriving soon.