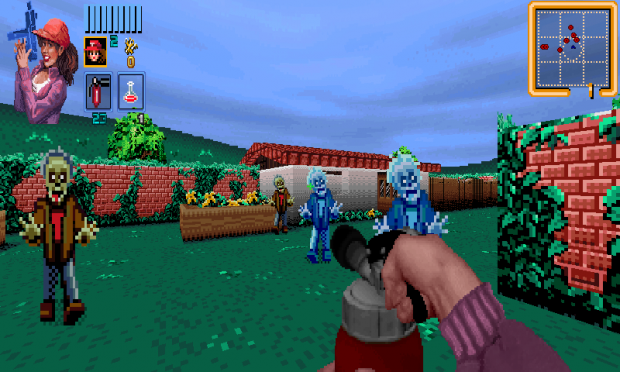 Folk bang on about the golden age of LucasArts like all it made was text adventures (and yep, they’re amazing). But one of the things about that particular ’80s/’90s incarnation of the studio was that it didn’t feel like an addendum to the ‘real’ business of LucasFilm, but an independent entity allowed to create its own characters and universes and make games the way its designers thought they should be made. It developed the odd Star Wars game sure (and they were generally great too), but it wasn’t a Star Wars factory.

Probably my favourite LucasArt game, with apologies to the aficionados, is Zombies Ate My Neighbors. This 1993 title was a co-op top-down run-and-gun action game, released on the Super Nintendo and Mega Drive/Genesis, with some of the greatest pixel art you’ll ever see and an irresistibly fast rhythm. It’s all about dashing around the levels as fast as possible, grabbing neighbours to save them from enemies (who’ll kill them if they touch, at which point a sad little ghost floats upwards), dodging baddies and grabbing household weaponry. The music, the escalation, the constant horror references and the sense of humour are one-of-a-kind, and to me this stands as one of the true jewels of the 16-bit age.

Someone who probably agrees with me is a Chilean genius who goes by Dude27th online, who is remaking Zombies Ate My Neighbors as a Doom II mod. There are mods and then there are the mods you find that just make your jaw drop, and this is clearly both a labour of love and being executed with some serious talent. Just watch a few seconds of Terror in Aisle Five, the game’s second level, and you’ll see how perfectly this has translated the game’s style into a new format.

You’ll need a copy of Doom II and the mod can be downloaded here, though as it’s a work-in-progress Dude27th is currently only up to level 7 (the game had 41 levels and 7 bonus stages, another reason it was insanely good).

If that all sounds a bit much and you’re just feeling a wave of nostalgia for Zombies Ate My Neighbors, and the also-good sequel Ghoul Patrol (albeit that one wasn’t really a LucasArts joint), then I have good news. A few weeks ago both games were released as a bundle on Steam. The original game, for my money, is still not given enough credit for how good it is. Anyway: that’s my evening sorted.