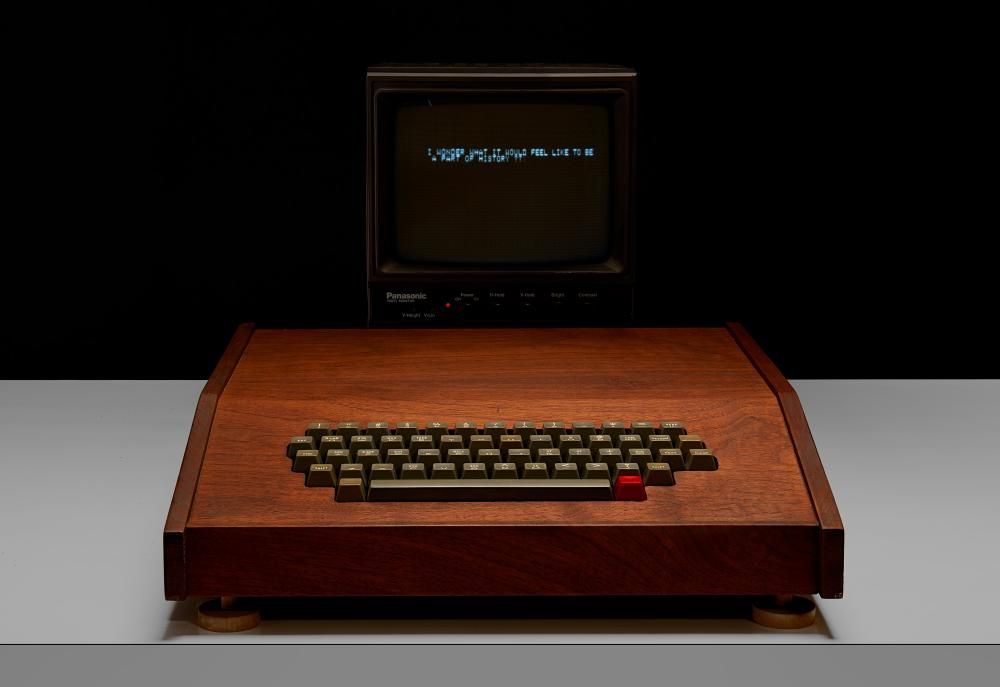 An Apple-1 personal computer, the first product ever made by the company, has sold at auction in the US for $500,000 (thanks, BBC). John Moran Auctioneers sold the item and in the process provided a potted history that answers some of the obvious questions: such as, what is that gorgeous wooden case all about?

“200 Apple-1 computers were designed by Steve Wozniak and assembled and tested by Steve Jobs, Patty Jobs (his sister), and Daniel Kottke in the Jobs’ home. 175 of them were sold for $666.66, a figure that catered to Wozniak’s love of repeating numbers.” 50 of these 175 were sold to Paul Terrell, who owned an early computing store in Mountain View, California, called ByteShop. Terrell was apparently unhappy that the machine came in kit form but Steve Jobs managed to work some marketing magic by convincing the guy he could profit by upselling them with necessary accessories like a monitor.

Terrell decided to build at least some of the kits himself before trying to sell them, which is where the case comes in. “The wooden case that houses this computer is made from Koa wood,” says the auction notes. “In the 1970s, Koa wood was abundant and easily accessible, especially on the west coast because it was native to Hawaii, but due to cattle grazing and extensive logging, the Koa tree is now considered much rarer and more expensive. There are only six known examples of the Koa wood case in existence, and this unit is one of them.”

The Apple-1 is still functioning and has only had two owners: “It was originally purchased by an electronics professor at Chaffey College in Rancho Cucamonga, CA, who then sold it to his student in 1977” for $650. This ownership line has led to it being christened the ‘Chaffey College Apple-1’.

The auction was held on 9 November, included various accessories such as user manuals and Apple software on two cassette tapes, and the final sale price was $500,000. This doesn’t make it the most expensive computer ever, or even the most expensive Apple-1—Bonhams sold one for $905,000 in 2014.