M.O.D.O.K. Canceled at Hulu After One Season 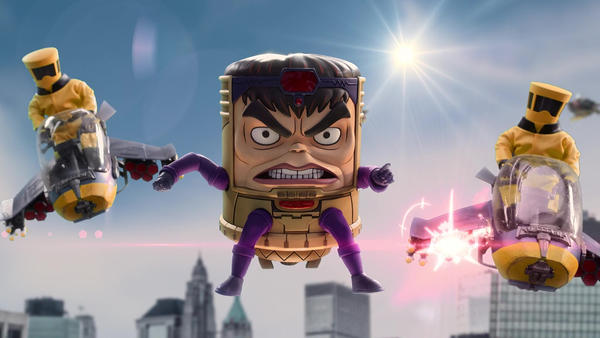 A one and done series for Hulu.

Marvel’s animated comedy, M.O.D.O.K., has been canceled at Hulu after only one season, per Variety. The stop-motion show premiered last year with a 10-episode first season and starred Patton Oswalt as the series’s chair-bound title character. It was a somewhat jarring departure from Marvel’s current run of Disney+ shows that explored M.O.D.O.K.’s (a.k.a. George Tarleton) family life and his status as head of his evil corporation, A.I.M.

Reception to M.O.D.O.K. mostly positive despite its short run at Hulu, with many gravitating to its crass humor and Robot Chicken-like art style. Although it seemed to find some success with a smaller audience, M.O.D.O.K. only represents the latest Marvel spinoff show to lose its way at Hulu. Three more shows—Howard the Duck, Tigra and Dazzler, and Hit-Monkey—were also in development at the streamer.

Howard the Duck and Tigra and Dazzler never made it past the planning phase, while Hit-Monkey went on to air its first season late last year. Though the animated, crime-fighting monkey show has yet to confirm a second season, it isn’t expected to return. All four shows were overseen at the now-defunct Marvel Television, which would have eventually brought each together for an Avengers-like special series called The Offenders.

M.O.D.O.K. spelled an interesting future for Marvel TV shows that fans will never get to see. Instead, shows like Moon Knight, She-Hulk, and Ms. Marvel will continue to bring tie-in content to the Marvel Cinematic Universe for the foreseeable future.