Home » Magic: the Gathering crossing over with Fortnite, Street Fighter, Lord of the Rings, and more

Magic: the Gathering crossing over with Fortnite, Street Fighter, Lord of the Rings, and more 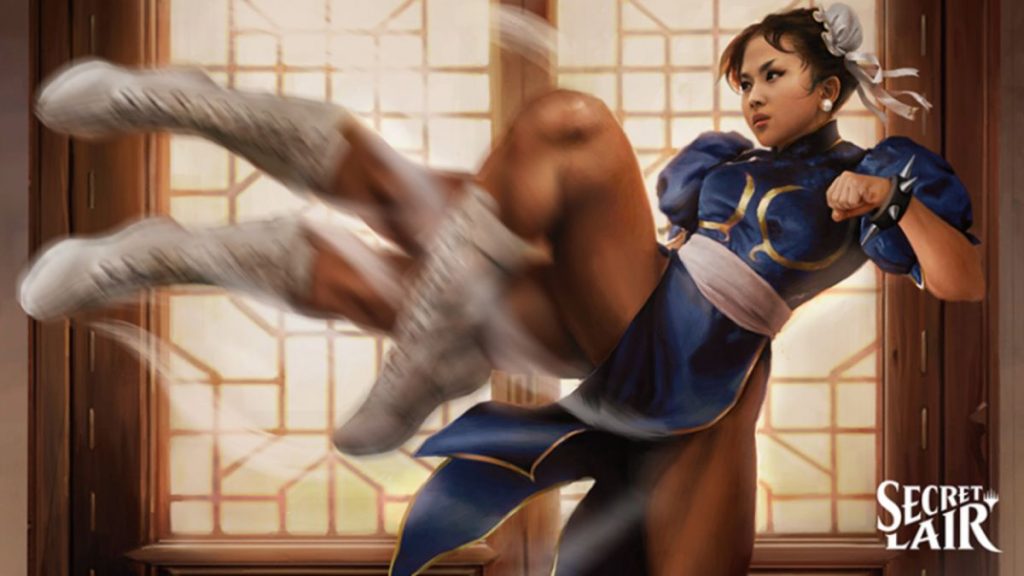 Wizards of the Coast announced Tuesday that Magic: the Gathering is getting a Secret Lair crossover with Fortnite, Street Fighter, and Warhammer 40,000. Wizards also shared a first look at some of the art you can expect to adorn your cards. Some fans don’t seem to be too pleased with the franchise collaborations, though.

Wizards made the announcements during Magic Showcase 2021, its annual presentation. All the crossovers will fall under the Universes Beyond label where previous collaborations have been categorized.

Both Fortnite and Street Fighter are part of the Secret Lair drops, limited-time sales that include special art and (sometimes) unique rule sets for cards. The whole idea is that these are one-time-only sales, so if you absolutely want Chun-Li in your deck, act fast.

Fortnite cards are rebranded reprints spread out over two Secret Lair drops. So essentially you’re trading default art for some fun Fortnite-themed art. Wizards showed off one image of Fortnite’s Cuddle Commander (the terrifying pink bear-head person) dancing with a crowd of other recognizable Fortnite skins. The Street Fighter Secret Lair drop will include a unique Chun-li card with, appropriately enough, the multikicker ability. Both of those sets are due out sometime in 2022.

Perhaps the collaboration to rule them all is The Lord of the Rings: Tales From Middle-Earth. Though it’s not releasing until 2023, the set will include characters like Aragorn, Gandalf, Gollum, and Frodo. That collaboration will release as four Commander decks plus Secret Lair drops, and will be available in physical and digital forms in MtG: Arena and MtG Online.

Wizards also showed off a new look at the previously announced Warhammer 40,000 set. The set will release as a Commander deck with new cards, new art, and reprints. Those will be legal for MtG’s main format. Expect those in 2022.

Rounding things out, Wizards announced that the main format will be returning to the realm of Kanigawa, but 2,000 years into the future in a new cyberpunk setting dubbed “Neon Dynasty.”

Fan reception is mixed, to say the least. Some fans are saying they’ll miss the feudal era of Kamigawa, which took large inspiration from Sengoku-era Japan, while others say they’re just tired of cyberpunk settings in general. You can’t blame someone for personal tastes, I suppose, and cyberpunk has been used as a narrative setting ad nauseum in the last couple years, from critically divisive blockbusters like Cyberpunk 2077 to more positively-received fare like The Ascent. For now, most fans appear to be in a firm “wait and see” mood.