Memorialize your MIA gamer buddies in the ‘first metaverse graveyard’ 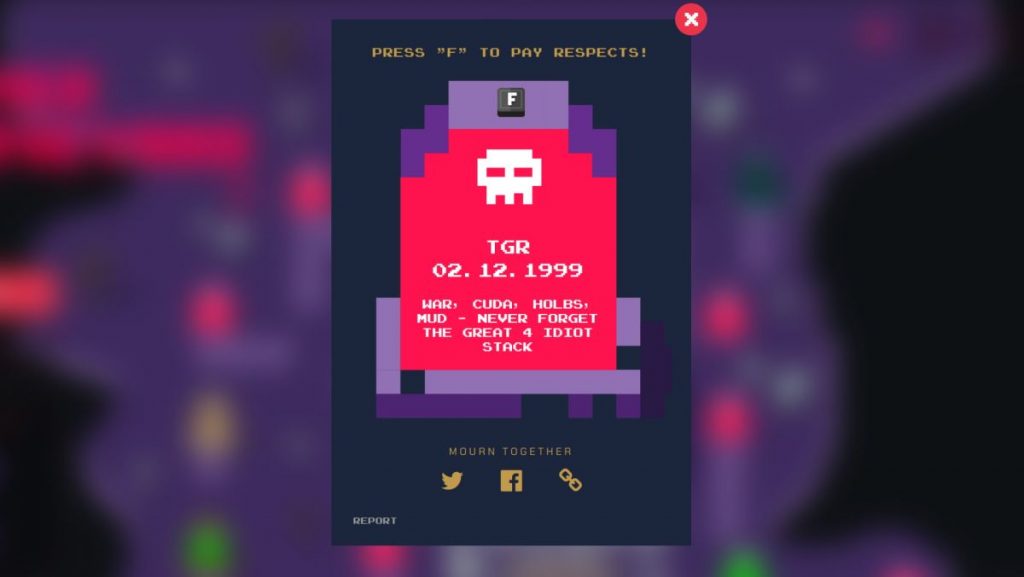 Here’s how it works: Head over to gamergraveyard.gg and click the “bury a friend” button. You’ll be prompted to enter your gamer buddy’s nick, the day they went offline—best guess is allowed, I’m sure—and an epitaph. Pick an optional theme, and then hit the “bury” button to drop ’em in the hole.

For the idly curious who wish to simply wander the halls of the immortal honored dead, a small number of clickable graves appear on the Gamer Graveyard screen, and there’s a search option so you can track down specific fallen comrades. Naturally, because this is a gamer thing, there’s an option to press F to pay respects, which lights a small candle resting on the tombstone.

Of course, you don’t have to actually die, or even be fully MIA, in order to ascend to this particular Valhalla. Any sort of reduction in your commitment to the gamer lifestyle, like gainful employment, meaningful relationships, or figuring out that Halo was never all that great and moving on to something else, is enough to get you in. Or, you know, someone could just paste your name in there for no particular reason at all. The barrier to entry in this particular club is very low.

The Gamer Graveyard isn’t just an eternal flame for digital lives lost: It’s also a promo site for Opera GX, a “browser for gamers” with integrated Discord and Twitch support, plus CPU, RAM, and network usage limiters aimed at keeping resources free for your games to use. It sounds gimmicky, but we took at look at Opera GX in 2019, shortly after it launched, and found that their might actually be some practical benefits to it.

What’s the connection to an online boneyard, or the larger ethereal concept of the metaverse as a whole? I do not know, but this is a good time to note that other browsers may run into some oddball issues with the site: The tombstone candles aren’t persistent in Firefox, while the search function doesn’t appear to work in Chrome.

It’s easy to be cynical about this sort of thing—and, all cards on the table, I am—but I can also absolutely relate to the feeling of sadness that comes when online friends fade away. I played Action Quake 2 with the most delightful group any gamer could ask for, and I still feel moments of melancholy over the fact that we all eventually moved on to other things and lost touch. But is this an adequate memorial to all those good times shared so long ago? No. Not even close.

Maybe there’s a small bit of novelty value to it, but it seems like an incredibly unimaginative way to razz your Destiny 2 buddy who missed the raid on Sunday, especially since there’s no way to share the online obits other than manually firing a link over Twitter, email, or whatever. But what really puts me off is the forced inclusion of the “metaverse” angle. This is a website, guys, and a fairly simple one at that. The tortured effort to portray it as anything more is a sharp-edged reminder that—you knew this was coming—the metaverse is, indeed, bullshit.