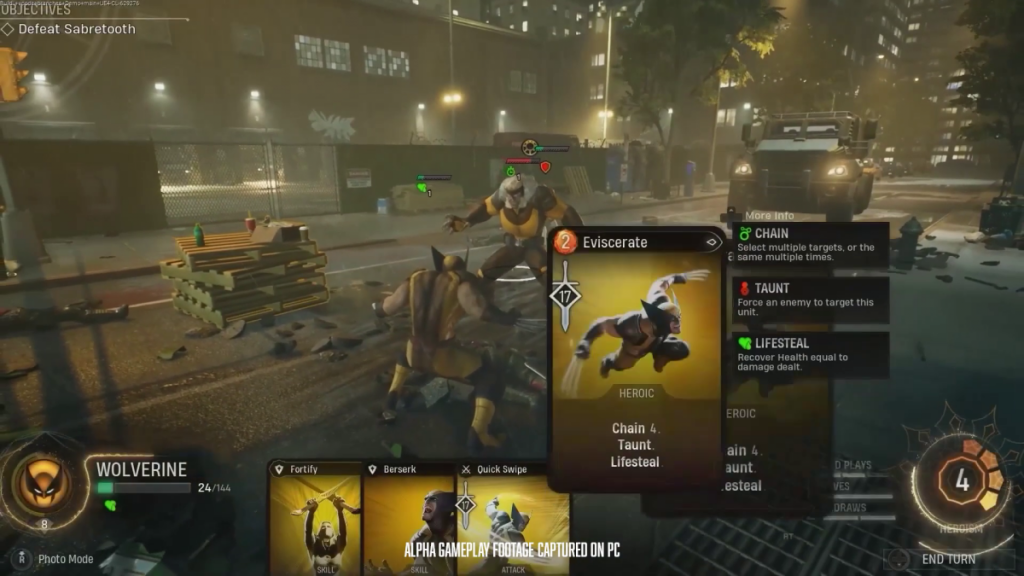 Before Firaxis revealed Marvel’s Midnight Suns, creative director Jake Solomon told us that its turn-based combat would be “completely different” from XCOM’s, and the first gameplay trailers revealed what he meant: card-based combat. That decision wasn’t everyone’s favorite. Based on the YouTube comments, some had been expecting ‘XCOM but with Marvel characters’ (exactly what Solomon said Midnight Suns wouldn’t be) and were skeptical that they’d like the inclusion of card game systems. The disappointment was loud enough that Solomon referenced it in a livestream today, embedded above.

Solomon seems to contradict himself here: Is Midnight Suns “completely different” from XCOM, or is it not that different from XCOM? The gameplay demo streamed today wasn’t comprehensive, but I think it’s enough to figure out the answer for ourselves. Midnight Suns obviously isn’t completely different from XCOM, but given that two turn-based Firaxis games are pretty similar by definition, it’s fair to assume that Solomon didn’t mean that literally. It does look like it’s going to feel quite different than XCOM, though, even if today’s comment indicates that it hasn’t leapt into the deckbuilding deep end.

Although their abilities are dealt as hands of cards, you’re taking turns moving heroes around in a 3D environment and telling them who to attack, which is the same thing you do in XCOM. The cards are a nice way to present several hero abilities to the player at once—big rectangles with unique art and description text seem better than little buttons with tooltips, especially when each hero has unique abilities to keep track of—but at a glance, it appears that decks and dealing aren’t the soul of Midnight Suns. There’s no chin scratching over complex combos like you get in Slay the Spire.

Looking more closely, though, I notice cards with effects such as “draw 2 cards” and “apply 2 Weak,” which are things Slay the Spire cards do. Most Midnight Suns cards don’t have a cost associated with them—each hero gets three card plays per turn—but certain cards require a resource called Heroism. One of the cards used in the demo changes the Heroism cost of a random card in a hero’s hand to 0, which is also similar to a Slay the Spire play. So there are card synergies and combos to think about here, and at least a few keyword effects to learn. Wolverine has “Chain” cards that allow him to attack multiple enemies, and “Taunt” and “Lifesteal” cards do the same things they do in Hearthstone.

There are other ways in which Midnight Suns is different from XCOM. You can move as much as you want before you take an action. At one point, Wolverine is instructed to run over to a pole and yank on it until it falls onto a couple of enemies. There’s no permadeath, and the game doesn’t play out like a simulated war. It’s an RPG campaign that tells one story.

That story is apparently pretty long, too. The demo shown takes place “10 to 12” hours in, and the lead character is only just meeting Wolverine, one of the heroes who can join your squad mid-game. After the combat scenario, Firaxis also showed off a bit of The Abbey, your base where you can hang out with the Midnight Suns crew and make friends with them, which is one way to unlock special ability cards for combat. The walking animation is a little dated-looking—Shepard strutting around the Normandy vibes—but getting to know these Marvel heroes, customizing the house, and petting your hellhound Charlie might end up being a bigger draw than the combat.

It’s footage from an unfinished version, too, and there’s still over six months to go before Marvel’s Midnight Suns releases in March 2022, so maybe that stiff movement will relax a bit before then. Here are a few more details from the announcement a couple weeks ago.