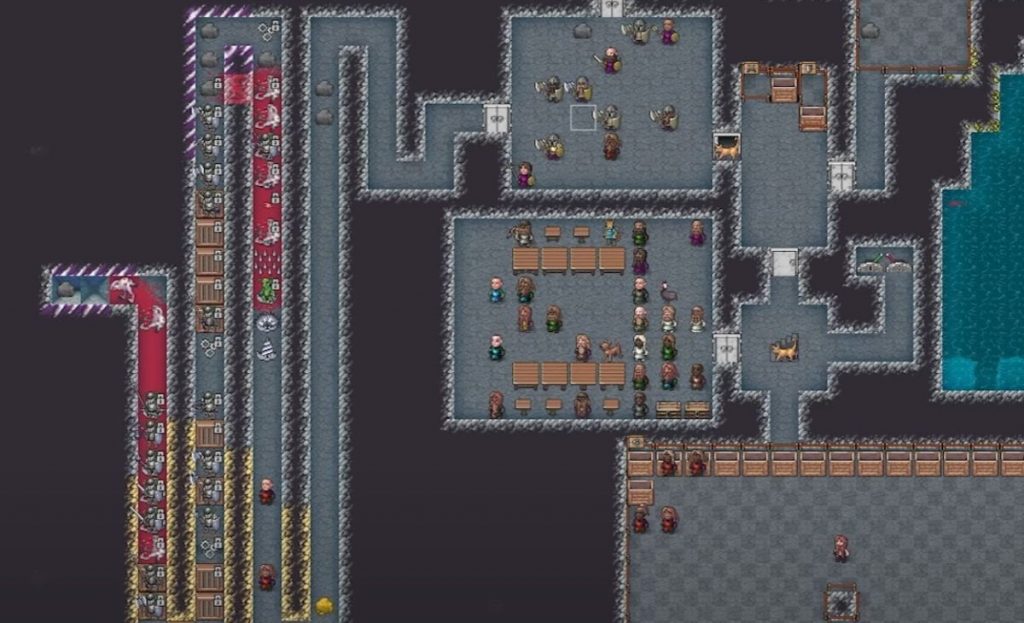 Dwarf Fortress looks like an innocent enough sim until you accidentally tap into an aquifer and drown every dwarf in your fortress, or until a horde of goblins shows up to slaughter your children. Any good fortress has a mazelike entrance full of traps just in case goblins come knocking, and the latest update video for the upcoming Steam version of Dwarf Fortress shows one such “hallway of doom” with its fancy new graphics.

Developer Zach Adams plays out a goblin siege in the video, calmly pointing out the blood splatters that appear around his spike and weapon traps. Longtime players will probably be more interested in some of the new UI features Adams points out. There’s a siege indicator that lets you know enemies are about, and as long as you’re under siege a caravan won’t be able to visit your fortress to trade goods.

There are convenient mouse-based menus for pulling levers to open and close doors—important for funneling goblins to their well-deserved deaths—and for telling your dwarves not to automatically pick up and move dead bodies. Normally it’s good practice not to let rotting corpses sit around your fortress, but you don’t want unarmored dwarves running into an ongoing siege to tidy up.

The final menu Adams points out is especially nice. The squad screen lets you choose which of your squads to control, and then simply clicking on a tile on the map lets you send them into battle. It’s a very nice upgrade from the elaborate keyboard commands required to do much of anything in the classic version of Dwarf Fortress.

I don’t expect my first goblin siege to go over this well whenever the Steam version of Dwarf Fortress comes out, but regardless I’m looking forward to spilling a little goblin blood.