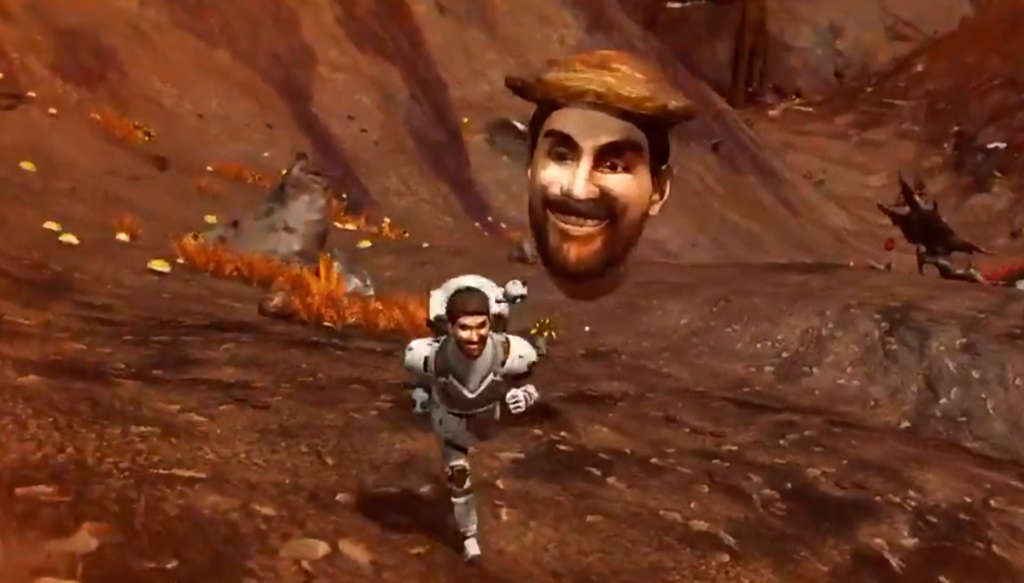 No Man’s Sky recently turned five years old, and as we learned on the anniversary of its launch there’s yet another free expansion coming our way called Frontiers.

As for when Frontiers is coming or what it contains, we still don’t know, and one No Man’s Sky fan got tired of waiting and wondering. As a protest (not born of frustration but boredom, apparently) video producer Winder Sun began modding Sean Murray’s smiling face into No Man’s Sky. On a new object. Every day. Until the expansion arrives.

For the fifth day the update is not released I have put @NoMansSky ‘s head onto… the Floaters(Ft. Sean Fart & extra Blob at the end) pic.twitter.com/svrLcC4ZksAugust 29, 2021

It’s a little chilling, I guess, though it seems to be all in good fun. Winder Sun began by putting Murray’s face on one of the exocraft, then added it into portals and warps so that when you fast-travel you’re being sucked right into Murray’s swirling face.

Next came mapping Murray’s face onto blobs, the bulbous creatures you can sometimes find hopping around on alien landscapes. And since you can have blobs inhabiting the little terrariums, Winder Sun now has a tiny Sean Murray head slowly slithering around inside their base. It’s worth noting that Winder Sun’s character in the game is also modded to look like Sean Murray, so this enterprise is quickly turning into that scene from Being John Malkovich.

For the third day the update is not released I have put @NoMansSky ‘s head onto… Blobs pic.twitter.com/XZZsAT4RKQAugust 27, 2021

Hopefully there won’t be much more of a wait until Frontiers arrives because Winder Sun has already added Sean Murray’s head onto planetary flora, meaning the alien world is literally covered by grinning Murray faces. Shrubs, flowers, and every blade of grass has Murray’s head on it. Yikes.

For the sixth day the update is not released I have put @NoMansSky ‘s head onto… the Floor(…and grass, and bushes, you get the idea) pic.twitter.com/pc1Lwc4S4fAugust 30, 2021

I shudder to think of where it’ll go from there. Murray-face freighters? A Murray-face Space Anomaly? An interstellar map where every single one of the quadrillions of stars are Sean Murray’s face? If Frontiers doesn’t arrive this week, we might just find out.