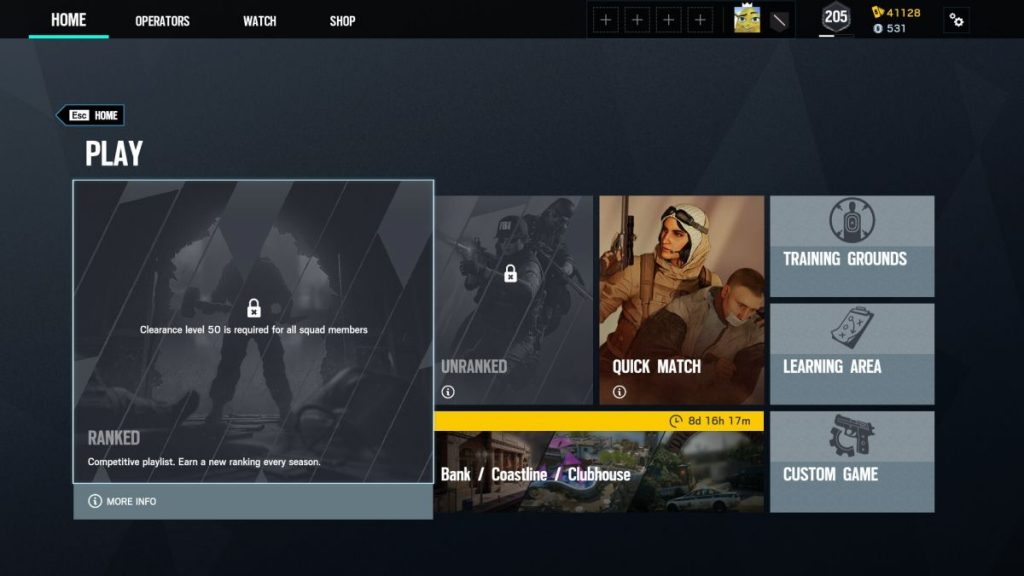 This story has been updated as a fix has now been deployed.

For parts of this weekend, many Rainbow Six Siege players have been unable to access Ranked, Unranked, and other game modes due to an issue related to lobbies and player account levels. “We are not having a good weekend,” tweeted Siege creative director Leroy Athanassoff.

The issue was that Siege seems to think everyone is partied up with a brand new account, which means they can’t join most playlists. But there’s no one to kick from the squad, because that low-level ‘ghost’ squadmate doesn’t exist.

Two Siege players at PC Gamer experienced that bug first hand. Morgan took the screenshot above, showing a level 205 account being informed that its empty squad doesn’t meet the level 50 requirement for a Ranked game. Spooky. (And frustrating.)

Reports from players on social media indicate that the bug started yesterday at a smaller scale, but has been spreading since.

Hey Siege Community,Thanks for bearing with us! We’re aware of two separate issues, one impacting matchmaking on PC and one impacting online infrastructure on Xbox, and the team is actively working to fix both.As soon as we have solid details to share, we’ll update you here.September 12, 2021

Some players reported hearing a sound as though a player had joined their lobby on game start—the ‘ghost’ causing the problem. A bot on the game’s official Discord also attributes the bug to ghost players, but Ubisoft’s official forum post and tweet about the issue don’t mention it.

At about 4 pm PT on Sunday, the official Siege account said the developers were working on two separate issues, “one impacting matchmaking on PC” and “one impacting online infrastructure on Xbox.” An hour later it followed up with an update saying, “We’ve isolated what we believe to be the root of the issue and have deployed a fix to resolve it. We’re seeing positive progress thanks to the fix and feel we’re closing in on a resolution! We’re continuing to closely examine performance and will keep you updated.”

The problems come as Rainbow Six Siege is having a free weekend just after the start of its new Crystal Guard season.

Some players claimed  a hacker was behind the ghosts, but we haven’t seen any evidence to that effect at this time. We’ll keep an eye on the situation as it evolves.

-Yes we are aware-Yes Teams are investigating the issue for hours now -Yes as dev we are not having a good week end ==> Stay tuned to official channel for more info And yes we apologize for this ??September 12, 2021