Resident Evil 3, but every enemy is Nemesis

If you ever played Resident Evil 3, you’ll remember one big, bad boss in particular – the dreaded Nemesis. Giant, terrifying, and able to burst through walls, Nemesis is naturally going to feature in a big way in the upcoming Resident Evil 3 remake. But it’s now possible to truly make him the star of the show, thanks to a mod that subs out every enemy in the game for the T Type monster, himself.

The Resident Evil 3 Remake hasn’t even arrived yet, but YouTuber FluffyQuack has posted a video (via PCGamer) showing what a slice of the horror game’s demo looks like when every enemy is the Nemesis – and it’s half terrifying, half hilarious. En masse, and with jarringly incomplete animation in cutscenes, the behemoth seems less threatening somehow, likely because he doesn’t exactly have the same capacity for jump scares when he’s around every corner.

Based on the clip, it looks like Jill can handle herself just fine against streets full of Nemeses. Maybe he’s not so scary after all.

Take a look for yourself below: 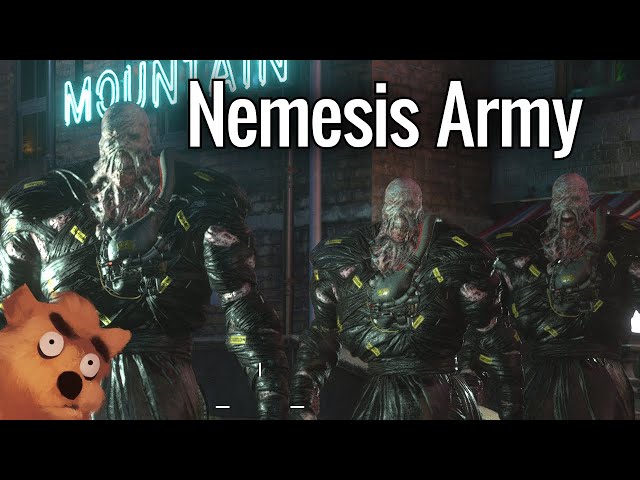 If you’re keen to have a go at replacing all of RE3’s enemies with the Nemesis yourself, head to FluffyQuack’s mod manager here.

The Resident Evil 3 Remake release date is April 3. While you wait, check out our lists of the very best survival games and best horror games you can play on PC right now.