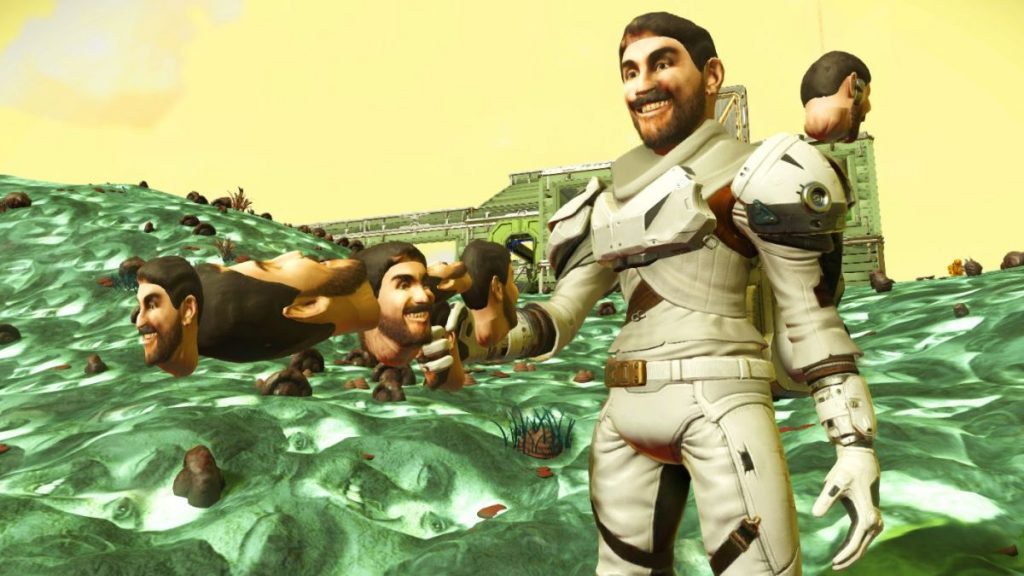 Before the release of No Man’s Sky Frontiers and its new settlement system (which is filled with extremely sad alien settlers), a player who goes by Winder Sun started modding Sean Murray’s face into the game.

It was a playful form of protest, mostly just to kill time until the Frontiers update arrived, and each day Winder Sun replaced another object with Murray’s head. First they stuck it on an exocraft, then onto portals and warp effects, then on the very grass that covers the surface of planets. Things got very weird, very quickly.

The Frontiers update arrived only a week after this bizarre Sean-injecting project began (a coincidence?) but that doesn’t mean the fun needs to end there. Winder Sun has made a mod so you too can add Sean Murray’s smiling face into just about every aspect of No Man’s Sky. It’s called, appropriately enough, Sean Sean’s Sean – Sean Overhaul.

And there’s an excellent trailer, too. That’s not sarcasm. This trailer is outstanding.

Want your character to look like Sean? How about your multitool? How about giant sand worms, or the very ground you’re standing on? The space anomaly can be Sean’s head, and you can fly into his mouth to land, and inside you’ll find it filled with Sean. Yes, it’s disturbing.

And pretty much everything else from objects to effects can be replaced with Murray’s noggin, if you like. Frankly, I think Sean Sean’s Sean should be made into an official expansion. (The head used, by the way, comes from the Everyone is Sean mod, which only turns other players into Sean.)

As an added bonus, on the back of the Frontiers update No Man’s Sky has at long last achieved a positive rating on Steam. That’s definitely something for Sean to smile about.