Space Punks is an isometric Borderlands that’s left me lonely, bored and frustrated 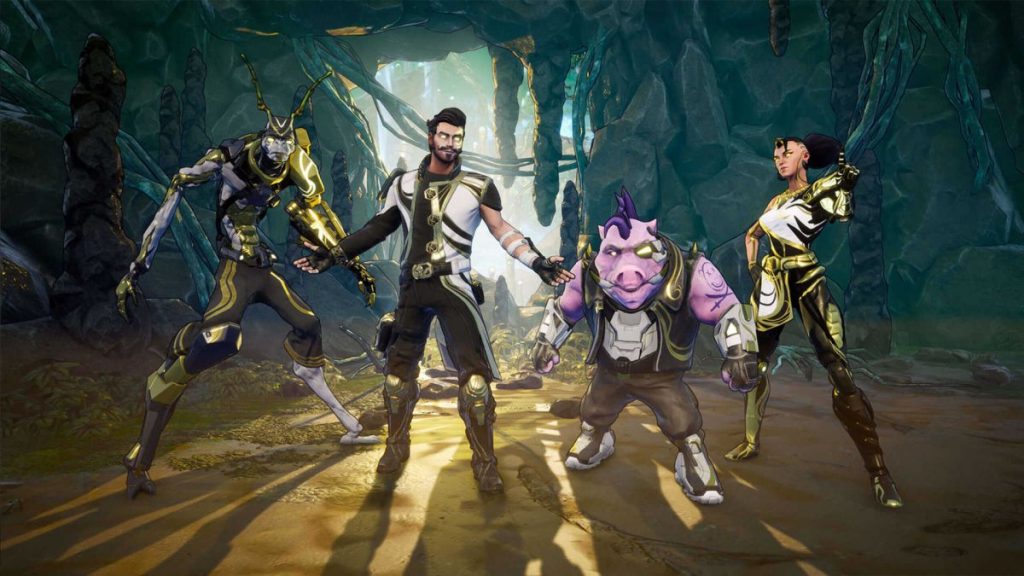 With all these rich arseholes currently going off into space, I feel like the stars need a little bit of anarchy to balance things out. Maybe courtesy of a shotgun-wielding pig-man? Conveniently, Space Punks—a co-op twin-stick shooter with heavy Borderlands vibes—offers exactly this. After spending some time with said pig-man, however, I am now inclined to let Branson and Bezos have space all to themselves.

Space Punks is in early access at the moment, with an open beta planned for the winter. It will be free-to-play at launch, but to get an early glimpse you’ll have to shell out for a founder’s pack on the Epic Games Store. Absolutely do not do that. Whatever it may end up being in six months, right now it’s just a chore.

Like Borderlands, Space Punks pitches itself as a slapstick sci-fi romp with a radical ’90s attitude. I was expecting jokes, larger-than-life characters and general zaniness—what I got was utterly generic. Yes, you can play as a pig-man, and there’s also a bug-guy, cyborg and some vanilla dude, but none of them have any personality traits beyond their repetitive barks; nor are they accompanied by any other memorable characters. There’s an AI fella, a robot and some other NPCs hanging around the hub, and none of them ever say or do anything worth repeating.

This dearth of character extends to the galaxy, which Space Punks doesn’t appear to care much about. I know as much about the setting now as I did when I’d never even heard of the game. Hell, I don’t even know what a space punk is, or why I’ve spent hours shooting a bunch of robots and doing dreary tasks. There is absolutely nothing propelling the game forward, aside from the desire for more loot and experience.

Maybe it’ll develop a personality over time, but it always worries me when I see an in-development game where the story and narrative have been left until later. If it’s not cohesive, if it’s not given the same status as the combat or crafting or the in-game economy, then it doesn’t have a chance.

Space Punks should be pretty straightforward: you get a mission, gear up and then jump into the fight. Sadly, early access niggles and weird design choices hamper the flow. The awkwardness begins right away when it recommends using a controller, showing the silhouette of something that vaguely looks like an Xbox pad, but then immediately starts showing PlayStation button prompts no matter what controller you decide to use. Except when it decides to show Xbox ones instead. How you interact with the UI also changes a lot, so there’s always this ambiguity, a feeling that you never really know what the game wants you to do.

This inconsistency is apparent all over the place. For instance, the tutorial mission has slots for other players, but only after that will you discover you need to unlock multiplayer first, which involves completing said mission. Even something as basic as bringing up crucial menus becomes a pain in the arse. If you need to see your inventory, you have to visit a specific location. The same goes for missions, tasks, the microtransaction store, the regular store and whenever you want to unlock new skills. For every menu, there’s a different spot in the hub you’ll need to interact with. But then you’ve got the fame progression system, which doles out random rewards, unlocks features and opens up new worlds—to access that you just have to hit a button. Why couldn’t all of them be that simple?

After accepting a quest, you hit up another station that takes you to a map with an assortment of repeatable missions. There doesn’t appear to be much difference between fleeting missions that are only up for a specific time and campaign missions connected to quests. You go out, shoot some shit, do some busywork and then come home. The actual shooting, and occasional hitting, is actually a lark. I’ve yet to come across any weapons that match Borderlands’ out-there arsenal, but so far all of them have been punchy and explosive, with the constant onomatopoeic feedback making it feel like I’m doing something exciting rather than just slowly walking backwards while hammering the trigger. Unlockable skills then offer a bit more versatility, letting you unload rockets on the gormless robots, or suck them into range so you can start hitting them with a hammer.

As much as I like dismantling evil machines, after a few hours I was starting to get the itch to move on—and not to one of the other worlds, which I’m yet to unlock. Absent any context, world building or creative objectives, there’s nothing to set the missions apart, aside from how much faffing around you have to do. If you’re lucky, you’ll just need to blow up some stuff. But then you’ve got missions that task you with jobs like collecting batteries and powering up generators, and boy is that a chore—especially when you’re not warned that the batteries drain quickly while you’re carrying them, necessitating repeated trips if you’re distracted for even a second.

That specific mission type is also a victim of Space Punk’s inconsistency. When you activate the machine that doles out batteries, it has to charge up first, making you wait around and shoot waves of enemies. This task is then replicated at the end, where you need to power up a relay. But this time it stops working the moment enemies get close enough—which isn’t remotely clear at first, and doesn’t really make sense either. When it stops, you have to then clear out the robots, rush back to the console, hold down a button and start it up again. By the time you do that, another wave will be on you. These early missions should be teaching players, but the only thing I learned was not to trust Space Punks. I assume the objective is a bit easier to do with a team, but I’ve had a hard time finding a crew.

Matchmaking just doesn’t work. When you activate a mission, you’re taken to a lobby—after you’ve waited for the game to connect to the servers, if it decides to work this time—where you can ready-up or wait for other players. You can only wait for 20 seconds, however, after which it automatically readies you and flings you into the mission, regardless of how many co-op buds have joined. I don’t know how lively Space Punks is, but it’s certainly not enough to fill a whole party in 20 seconds. Or even one slot.

You’d be forgiven for thinking it’s singleplayer, frankly. There’s no voice or text chat, and I can’t for the life of me figure out how to play with randos, aside from simply praying. Things are only slightly better with friends. See, while there’s no real social menu, there is a very basic friends list that it draws from the Epic Games Store. This way it is at least possible to play with other people, but grouping up can also lead to more frustration. When I recruited our editor-in-chief Phil Savage, for instance, he couldn’t join my party even after finishing the tutorial. After that, I stopped being able to invite him at all. When he then invited me to a party, I was informed I was already in a party—the one we’d failed to form originally.

For a co-op first game, Space Punks is very hostile towards the concept of experiencing it with other humans, so I’ve played all but a few moments solo. But whenever I get back from another lonely mission, I’m greeted by a hub that, while not teeming, still has a few other players milling around. I watch them go to the shop and get new quests, wondering what they’re buying and where they’re going next. But I can’t ask them. They might as well not be there at all, and currently their presence just throws salt on the wound.

I’d hoped to play more before I typed out my impressions, at least getting to one of the other worlds—the first one is an alien desert evocative of Pandora, and I’m already tired of it—but I just hit another mission that gives up before it manages to connect to the servers, so I think I’m done. If the allure of giving a pig-man a shotgun is still strong even after all of this, save your cash and wait for the open beta.