Home » Star Dynasties is now out of Early Access on Steam

Star Dynasties is now out of Early Access on Steam 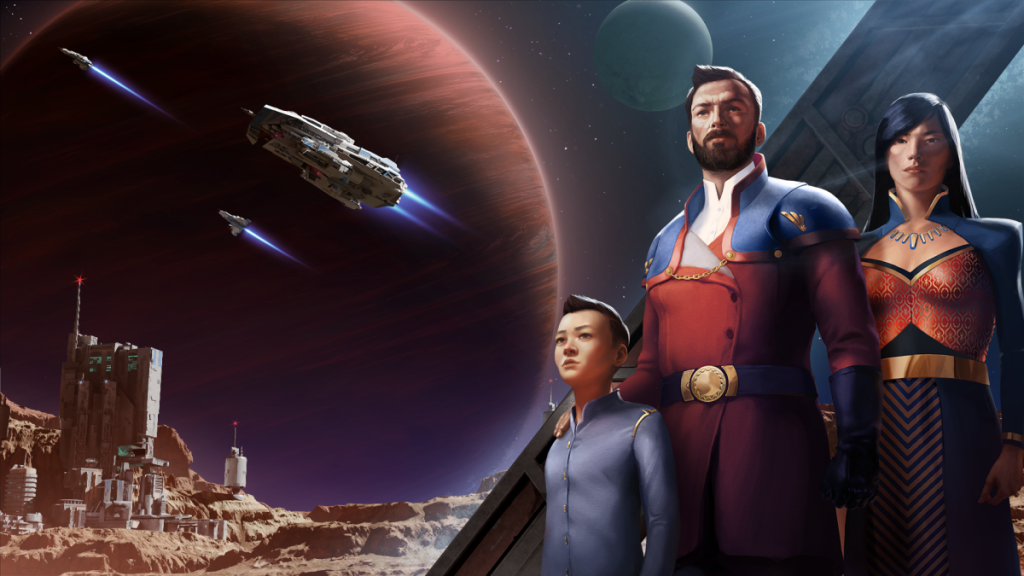 Earth is gone. Our conquest of the Milky Way is a distant memory, the technology with which we claimed the stars long forgotten. We are in the midst of an intergalactic dark age, one in which our few remaining colonies have succumbed to feudalism.

You are the leader of one of these scattered remnants which are now vying against one another for supremacy. And the road before you will be anything but easy. Success will require more than strength of arms or technological supremacy.

Science and military might are not what truly drives the outcome of war — they are simply the vessels through which it’s waged.

No, the deciding factor in victory will be the friends you keep. The secrets you gather. The image you maintain.

The lines you’re willing to cross.

If you’re to succeed, each must become part of your toolkit. You must portray the outward appearance of honor, all while looking for an opportunity to bury a knife in a rival’s back. You must treat your people and vassals with an even hand, but understand when an iron fist is necessary.

Tread carefully. In this dangerous game of intergalactic cat and mouse, one wrong move is all it takes. One mistake, and you may find yourself spinning inevitably towards defeat, your legacy falling to dust.

Because while you weave your own web of intrigue, your rivals will be doing the same. Uncovering secrets and forging their own alliances. Probing for weakness, and waiting for the right time to strike.

There’s also no guarantee your descendants will respect your legacy. Each will have their own strengths, weaknesses, and personalities. Even the most ironclad empire may fall apart under a weakling; even the most honorable faction may descend into wanton bloodshed if inherited by a monster.

A strategy title developed by Pawley Games and published by Iceberg Interactive, Star Dynasties is all about the narrative. Although it does feature light empire management and turn-based strategy elements, the true focus is on the human element. On drama, intrigue, and personal politics.

With hundreds of procedurally-generated characters, no two runs will be exactly the same. Every decision you make will create a ripple that impacts not only your allies and enemies, but the very future of your empire.

Star Dynasties has evolved considerably since it first hit Steam Early Access in March 2021. In the months that followed, the developers collaborated closely with the community, working hard to incorporate feedback and refine the game. To that end, in addition to bug fixes and quality of life improvements, the developer has added a multitude of new features.

But be prepared for unforeseen consequences. You lack the knowledge to fully comprehend this technology. You have no way of knowing its side effects — or what happens if it’s used improperly.

Dangerous? Most certainly. Worth the payoff?

That’s up to you.

Also released in July were several upgrades to the Star Dynasties modding tool, such as custom actions and custom Expeditions events.  Have you ever wanted to conquer a galaxy far, far away, comb through the aftermath of a devastating galactic conflict, or witness the impact Spice can have on a war? Here’s your chance.

The full release earlier this week coincided with another set of major updates, as well. The biggest change replaced Star Dynasties’ infrastructure system with Colony Improvements. Under this new system, each planet is generated with a set of random pre-collapse installations and remnants which provide a wealth of different benefits when restored to working order.

A Security Center, for instance, can significantly improve the stability of a colony, adding a massive bonus to its security score. A Defense Platform Fabricator, meanwhile, will make it easier to protect yourself against attackers. Procedural generation ensures that each colony feels unique, and that there’s no singular build path that’s superior to all others.

The developer also introduced a minor rework to romance, adding a Seduction mechanic and the ability to name newborn children instead of randomly assigning them a name. allowing you even greater ownership over your growing dynasty.

In the distant future, Earth is gone and nearly forgotten. Humanity has become little more than a disjointed collection of squabbling kingdoms or vassals. Will you be the one to change that and reclaim our former glory?

Or will you be just another footnote in history, forgotten in the silent depths of space?