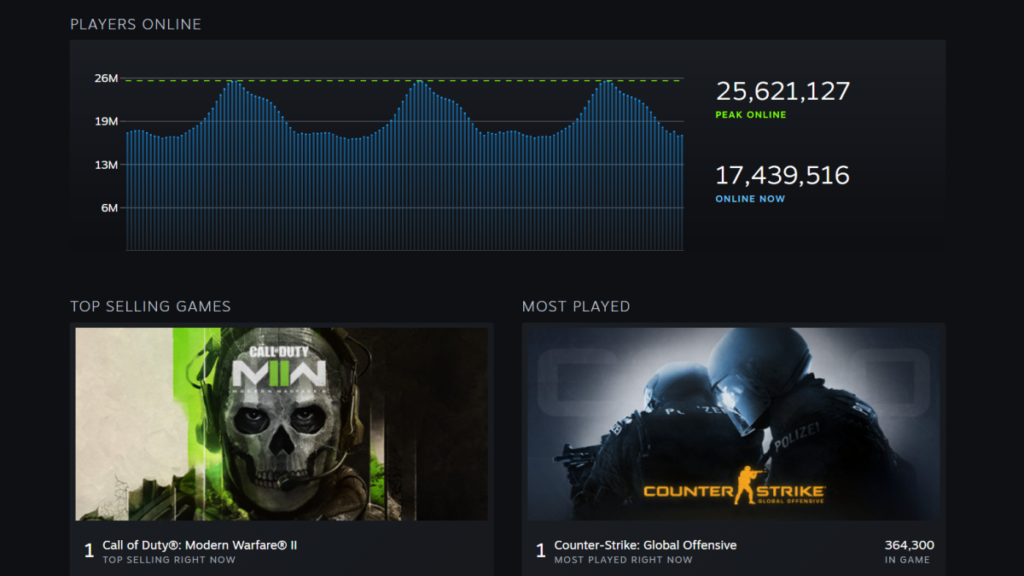 The Steam Top 100 page is no more. That old utilitarian list of Steam’s most popular games by concurrent player count has been replaced by a deeper and more attractive set of rankings (opens in new tab). You can still see which games are currently being played by the most people, but now you can also sort games by their daily unique player counts and by how much money they’re making.

The new Steam stats page is called “Steam Charts,” which could lead to some confusion, since there’s already a helpful website called Steam Charts (www.steamcharts.com (opens in new tab)) that uses the Steam API to provide more comprehensive concurrent player data than Steam itself displays. Steam Charts remains a useful website—I use it all the time—but it’ll be harder to distinguish from Valve’s official stats page in Google search results. C’est la vie, I guess!

The most notable addition to Steam’s new Steam Charts page is the Top Selling Games chart. Valve has been sharing monthly sales charts for a while now, but with these weekly charts its journey to Billboard Hot 100 (opens in new tab) territory has finally concluded. Like the famous song ranking, Steam’s top sellers chart displays how many places a game has moved up or down since the previous week’s chart. It’s easy to imagine talking about a “chart-topping game” or a game that “topped the Steam chart for four weeks”—a more contemporary version of those old NPD game sales reports that go around when console warriors are beefing.

The top sellers chart is based on all revenue through Steam, not just units sold, so free-to-play games are included (provided they’re making lots of money through DLC or in-game transactions). Apex Legends is third on the list right now. Cyberpunk 2077 is fourth on the list, which tells us that the surge of players that followed the release of the Netflix anime isn’t just people returning to the game; people are buying it. And of course we’re happy to see Trombone Champ sliding in at #12.

Steam already had a top sellers list before this—it’s a category on the front page of the store—but the presentation of these new charts and the fact that they’re archived each week could multiply their power. Fixating on player counts is a popular PC gaming pastime, and I can’t imagine this new Billboard-style top sellers chart will go unexploited by people who are trying to prove that one game is better, deader, or more profit-driven than another.

Another small-but-interesting change is the new option to sort the concurrent players list by “daily players.” Instead of ranking Steam games by the number of people playing them this very moment, the daily players setting “ranks the games based on the total number of unique players over the past 24 hours.”

That changes the picture considerably. Games that are more popular in time zones other than my own, like PUBG, jump several places when I switch to the daily players view. Grand Theft Auto 5 and Cyberpunk 2077 also leap up the list. Meanwhile, Team Fortress 2 drops 19 spots when I look at daily uniques instead of concurrent—that means that lots of instances of TF2 are running at the same time, but more people play Yu-Gi-Oh! Master Duel every day. Curious, isn’t it?