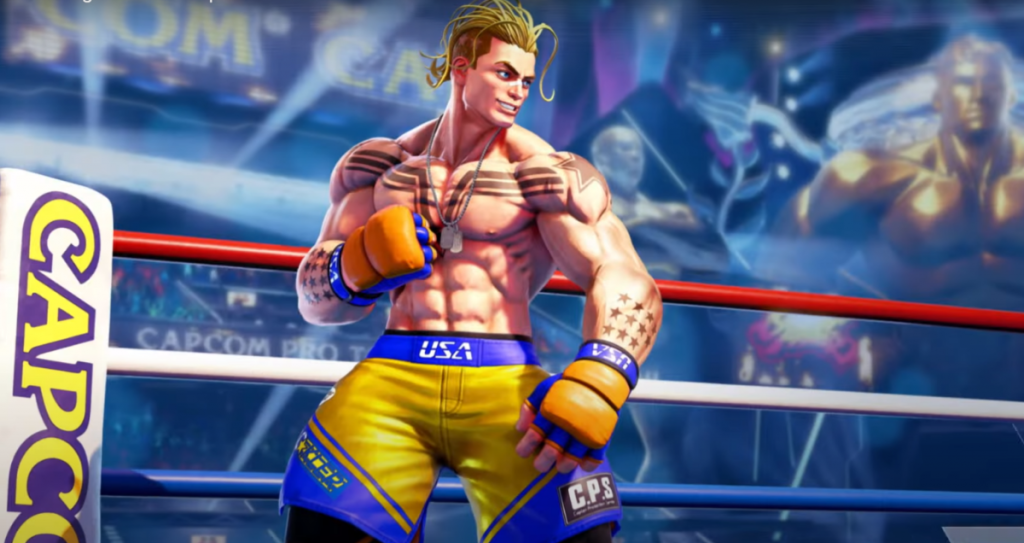 Luke has a punch-focused fighting style and looks like something of a cross between a boxer and MMA fighter. He also has more than a few similarities to one of Street Fighter’s golden oldies, Guile: blonde hair, dogtags, and as you’ll see above, projectiles that bear a passing resemblance to sonic booms. Finally, Luke mentions his father in the trailer, and has a rather large upper body tattoo of the stars and stripes so… yeah. Looks like Guile (or Nash) has a son.

Meet Luke, the brand new final character for #SFV and a key player in the future of Street Fighter! #SFVSummerUpdate2021 ? pic.twitter.com/RszpnoWlZVAugust 3, 2021

One neat bit of trivia, noticed on the Shoryuken forums, is that Luke may be a re-jigged version of a character once destined for the cancelled Capcom Fighting All-Stars game: in this case the character was called Rook. He has an entry in the guide for Street Fighter V, but his name was transliterated as Luke on the official site.

The character will arrive in-game in November, while this month will see the release of Akira (no, not that one: this is a female fighter from Rival Schools) and Oro (a Street Fighter III classic, an old dude who’s so deadly he fights with one hand tied up). Both can be seen in the summer update video below, and arrive August 16.

Street Fighter V has arguably achieved its stated goal of being Capcom’s first ‘fighting platform’, and Luke will mark the end of years of substantial DLC support. The ‘platform’ thing simply means that this is the first entry in the long-running series that has been continually updated since release, and relies on microtransactions rather than asking players to fork out full-price for a Hyper Fighting Deluxe Champion edition every year or so. If you want to check out why Street Fighter is still the king of the fighting genre, Evo 2021 is happening right now.