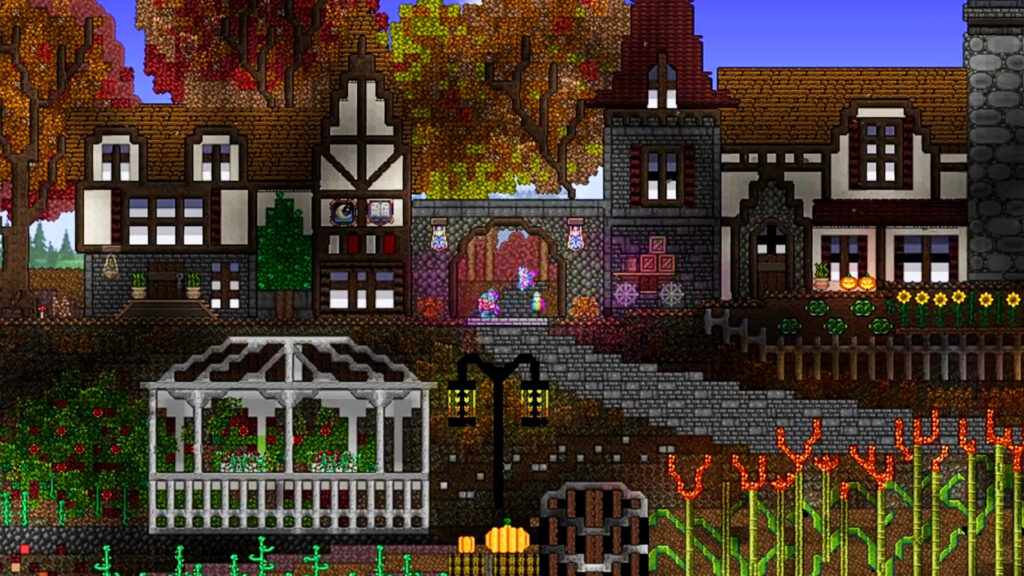 Have you ever seen a Terraria build so impressive that you almost don’t recognise it as the game you know? Enthusiast builder Lady Forestia’s latest offering makes incredible use of perspective tricks to turn the 2D crafting game environment into what appears to the eye as a fully-realised 3D scene, with a rather stunning tour through their small village featuring a lake, a cobblestone path, a pumpkin patch, and more.

A video posted by Lady Forestia on Twitter showcases the gorgeous build, with the player character standing outside a lovely stone and wood building in a forest. Clever use of block placement gives the appearance of trees lurking in shadow behind the structure, while the ground underneath the player has been laid out with blocks that give the appearance of a still lake that stretches out towards the camera, surrounded by sugar cane plants.

Lady Forestia then climbs a staircase to a rock tunnel, with clever teleporter use to represent travelling through the background cave. They then stroll down the street of a rather picturesque little village, across a stone bridge over a winding river, and past what appears to be a local church and a park with benches and a gazebo.

They then arrive in a spookier part of town, with some houses that give off a very haunted vibe and a vast pumpkin patch full of increasingly large Jack-o-lanterns with a variety of silly and spooky expressions. Yet more clever underground building gives the impression of a roughshod cobblestone path stretching out through the pumpkin field, as the tour comes to a close.

The autumn update is available on Steam; lady Forestia pic.twitter.com/eGg8CME9Ln

It’s an astonishing piece of creativity – and is only one part of the full build, which Lady Forestia says they have been working on for three months since starting on the PC version of the indie game. It’s well worth checking out, featuring a blossoming zone packed with pink and purple trees that contains a giant cake house and resident unicorn, and a rather striking hell-castle complete with giant skeleton.

Lady Forestia uses Terraria’s Journey mode setting, which enables players easy access to all of the game’s materials and allows them to disable the survival game elements, to freely build these incredible, perspective-warping landscapes. They are currently debating over the next thing to make, asking their followers whether they should go for a “purple corruption mushroom biome or modern city?”

If these clever perspective tricks have you aching for that extra dimension, one fan has been recreating Terraria in 3D, to rather terrifying effect. In other Terraria news, Re-Logic recently announced a partnership to create a Terraria graphic novel series.