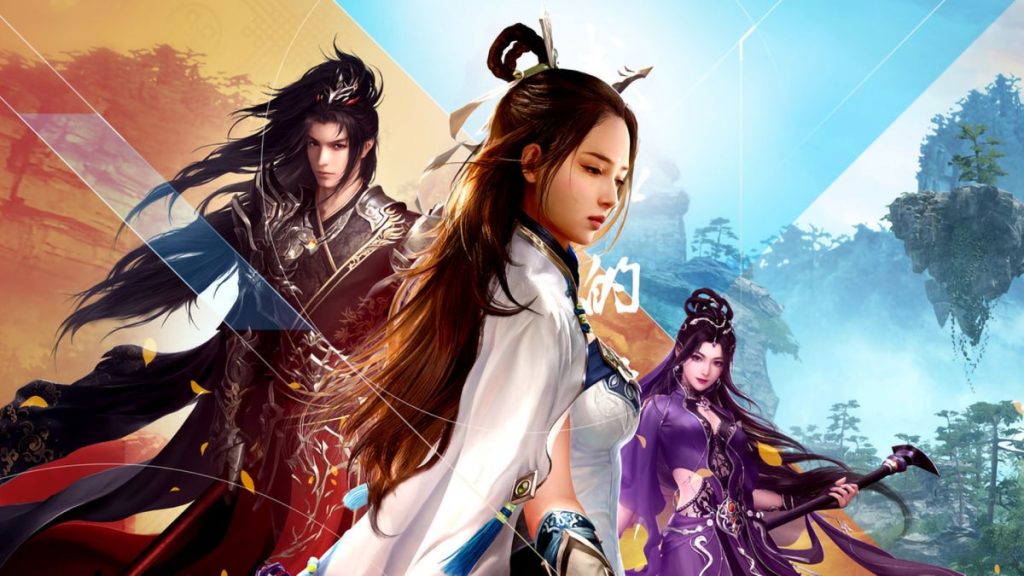 There’s a good game buried deep beneath Swords of Legends Online’s awful translation and jumbled user interface, but it took me 20 hours of digging to get to it. MMOs often gate too many of their best features behind an arbitrary leveling process, but this feels downright deceptive. For days I ran from one quest marker to the next, stuck in an endless loop of boring fetch quests and cutscenes I could barely understand. Now that I’ve reached max level, though, SOLO feels like a completely different—and much more likeable—MMO.

What is it? A fantastical, Chinese MMO with an emphasis on story.
Expect to pay: $40 (no subscription)
Developer: Aurogon
Publisher: GameForge
Reviewed on: i7-7700, Nvidia RTX 2070, 16 GB RAM, 500GB SSD
Multiplayer? MMO.
Link: solo.gameforge.com

That sudden 180 is thanks entirely to SOLO’s robust endgame activities: running dungeons, PvP brawls, scouring the world for hidden treasures, even using a lantern to shift into a parallel dimension to hunt down dangerous undead spirits. I’ve been teaming up to kill world bosses, plying specific NPCs with gifts, and fussing around in one of the most intricate housing systems I’ve seen in an online game. It’s been a while since I played an MMO with such absurd variety. It’s a strange and sometimes absorbing experience dragged down by a handful of issues that stops SOLO from competing against more popular games like Final Fantasy 14 and World of Warcraft.

SOLO’s endgame is so rich and expansive because this MMO has actually been around for a long time. It’s a spin-off of the Gujian RPG series, which has also spawned a massively successful, award-winning Chinese TV show.

The heart of Gujian and SOLO is its vivid approach to xianxia, a genre steeped in Chinese mythology. While North Americans might simply label it “epic fantasy,” xianxia isn’t just a Chinese spin on classic genre conventions like elves and dragons. It’s a cosmos-spanning martial arts drama focused on the process of “cultivation”—obtaining power and wisdom—through trial, with heroes and villains often becoming gods whose battles span dimensions. Epic is an understatement.

This fantasy isn’t just expressed through SOLO’s breathtaking environments and monstrous enemies, but also the way my character moves through the world. While running I can gracefully leap into the air like I’m in a martial arts flick—only it’s possible to leap even higher by double and triple-jumping. With enough speed, I can effortlessly bound over entire buildings, run along rooftops, and even fly around riding a mystical sword like a skateboard.

I just wish I knew what it was I was leaping, running, and gliding toward. SOLO is a story-driven game that painstakingly fleshes out its fantasy world and characters, but the translation and localization efforts of western publisher GameForge are woeful, rendering almost all of it pointless. It drags nearly every aspect of SOLO down in some way.

Voice-acted cutscenes sound machine translated and feature such broken English that I quickly gave up trying to piece together what was happening. Near the end of my leveling, I spent almost as much time completing quests as I did mashing the ‘F’ key so I could skip past cutscenes full of stilted, broken dialogue. I even changed the spoken language to Chinese just to escape the bad English dub. This sucks. SOLO’s world is bursting with evil sea witches, demon blades, and ancient gods, and I want nothing more than to experience this story as its developers intended.

SOLO’s translation isn’t the only big issue: Though it’s undeniably pretty, I struggled to get anything close to a stable 60 fps on my 2070 at 1440p. Open areas frequently hung around 50 fps, while dense cities (or group dungeons) cut that down to 30 and lower. What’s weird is that turning every setting to low only increased performance by about 15%. So if you’re playing on an older machine, expect some pretty “meh” performance.

I find it baffling that GameForge decided to release a story-heavy MMO with such a shit localization. It doesn’t just undermine what is clearly one of the biggest features of the game, but actively weaponizes it against my enjoyment of it. Instead of the story being a useful way to deepen my relationship with this fantastical world, it’s now an obstacle to be overcome by blitzing through the leveling process as quickly as possible. And even though I’m now elbow-deep in a more satisfying endgame grind, there’s always this distance between me and SOLO because I’m constantly battling to understand what it’s trying to say.

The crap localization isn’t just relegated to the story cutscenes and quests, but poisons nearly every interaction I have with the game. Ability tooltips can feel cryptic, tutorial steps can be hard to follow, and it’s pretty easy to go hours without realizing there’s some extremely useful rewards you can claim from one of SOLO’s various progression systems.

This is all made worse by SOLO’s messy user interface. There are dozens of menus, each with their own important uses, but they’re so haphazard that it can be really frustrating trying to find what you need. Even just equipping non-combat abilities to my hotbar or finding my progress with a certain endgame faction can take minutes of poking my head into different menus before I find the right one.

I’ve played a lot of non-English MMOs in my life—I’ve even used optical character recognition software to translate my screen at runtime—and Swords of Legends often feels just as inaccessible despite being technically translated to English.

SOLO is a thoroughly inaccessible game, but those who do persist will eventually stumble into an expansive endgame with a lot of variety. After 24 hours of knocking out quests, I finally hit max level and smashed open a pinata of activities I really wish hadn’t been locked behind this grind.

Dungeons, which seemed mind numbingly easy at first, now have two more difficulty modes that ramp the challenge up in interesting ways. Bosses don’t just have more HP but also new attacks that create complicated AoE patterns to dodge. Completing them now takes a measure of effort and skill, but they’re still far behind the spectacle and challenge of World of Warcraft’s and Final Fantasy 14’s group activities.

One thing I didn’t expect to enjoy is SOLO’s intense 3v3 PvP arenas. Usually PvP isn’t my thing, but here the combat system nails the fantasy of being an agile martial arts hero. During questing it’s hard to appreciate the nuances of my Spearmaster’s abilities because most enemies just stand still and occasionally throw out a special ability that I can easily sidestep.

In PvP matches (and, to a lesser extent, endgame dungeons and world bosses) I’m now forced to make much better use of my abilities. I’m dodging deadly attacks with elegant backflips before using another skill to charge back into melee range. Some of my attacks can be chained together into a deadly combo that temporarily upgrades other abilities, and if I manage to deplete an enemy’s stun meter I can hit them with a coup de grace that triggers a zoomed-in execution. Fights are flashy and explosive and demand good reflexes.

I also like that SOLO’s endgame doesn’t revolve entirely around killing stuff for loot. Clues I find in treasure maps can lead me to rare loot hidden throughout the world. I can lose hours crafting furniture and then painstakingly adjusting it pixel by pixel to fit just perfectly in my new house, or goof off in a hilarious Bomberman-style PvP mode. There’s an alternate dimension infested with evil spirits I can hunt, or I can chill out by a quiet river and catch some fish. All of this feeds into different progression systems that often overlap, showering me with rewards.

It’s wild to me just how much there is to do and how entirely free it is of the time-gating or pay-to-win nonsense so prevalent in other MMOs. There are a few restrictions, like not being able to earn dungeon loot more than once a day, but it’s hard to be grumpy about that when there’s a dozen other things I can do instead. And despite having a cash shop, SOLO only sells cosmetic items. There’s no subscription fee, either (not even an optional one).

It’s cool to see SOLO buck the negative stereotypes associated with a lot of MMOs. I just wish it was more approachable. There’s a lot to like about it if you can persist through its initial leveling grind and are patient enough to deal with its crappy localization. I’d only recommend SOLO to people who have already bounced off of the genre’s bigger names like Final Fantasy 14 and are desperate for an alternative.