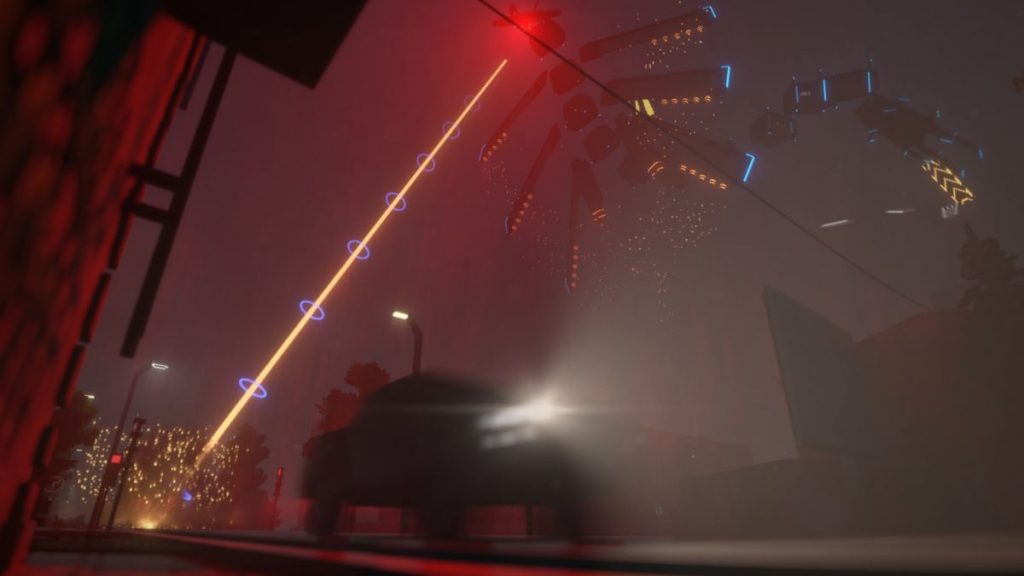 A sickly teal beam pierces the night sky, searching. You sprint down a narrow rain-soaked alleyway, but not quickly enough to avert its gaze. The beam turns red with a deafening electrical growl. And then, with a scream, it strikes.

Teardown’s smashing great heists might not seem an obvious choice for seasonal October spooks. But thanks to one particularly horrifying mod, the voxel sandbox has created some of the most thrilling scares I’ve experienced in recent memory.

what on earth is happening in teardown at this point pic.twitter.com/e0Y1a5PhHYOctober 8, 2021

Initially created by Fitne Por, Basilisco is a giant mechanical beast based loosely off the Guardian from Journey. It looms, it searches, and it strikes with an array of devastating weaponry, like some monstrous experiment unleashed upon the world. Its wail sounds like a Half-Life 2 strider run through a dial-up modem, organic wails punctuated by static bleeps and anonymous radio voices.

You can shoot it, even take chunks out of its body. But the worst it’ll do is send it flying off for a moment, before it comes screaming back with a dive attack.

Basilisco is meant to be plugged into any map you fancy, and a few Workshop submitters have filed their own takes with remixed levels. The most horrific, however, has to be a version that unleashes it on a sprawling Russian town. Forget Teardown’s heists—escaping this monster could (and should) be an entire game unto itself.

At times, driving through a foggy night chased by ominous lights, Basilisco reminds me of Beware‘s vehicular horror. But what I adore most is the way the mod plays into Teardown’s strengths—the moments when you hear a crash and a scream behind your back, turning to see what was once a solid building now crumbling to pieces.

While Teardown is rather limited with AI right now developer Dennis Gustaffson has already revealed some particularly creepy robots planned for the game’s Part 2 update (which will also add a suite of Garry’s Mod inspired physics tools). Teardown’s mod scene is already booming, and I’m as excited as I am horrified for the potential for more modders to start filling the physics sandbox with even more terrifying creatures.