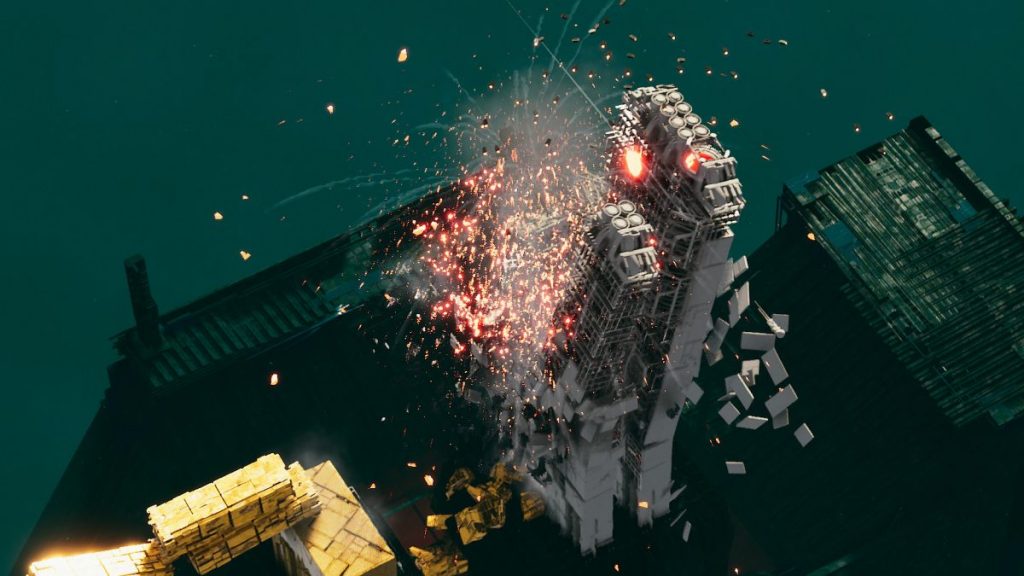 From Teardown to Red Faction Guerrilla, I’m a fond fan of games that let you wreak absolutely pummel haphazardly-placed architecture. But rarely have I seen it done with as much style as the demo Randwerk Cooperative’s upcoming tower-toppler Abriss.

A destruction sandbox in the style of Beseige, Abriss similarly has you building elaborate contraptions with which to smash up unsuspecting towers. And if If I do have a complaint, it’s that the contraption-building itself is a little flat.

The example levels only have you building precarious structures that fall onto your targets—and while the sandbox opens up with hinges and lasers, I’m still waiting for a sense that I’m building a contraption instead of a directed Jenga tower. Hopefully, that’s just a worry with this demo, which is missing many planned tools like thrusters and bombs.

But bloody hell, if it isn’t a looker. Abriss sports “digital-brutalist” architecture that immediately evokes Hawken, or the first Alien film—stark, almost space-ship like buildings. Flat panels littered with greebles, and hiding layers of pipework, scaffolding, and high-explosive reactors.

Abriss knows it’s a looker, which is why it already features a snappy gif-maker.

The game’s sandbox doesn’t just open up the toolbox, but also allows you to slow down time or even turn off gravity, to really let the chaos ling. While currently only allowing for time-frozen turnarounds, I’m hoping that Randwerk eventually lets you export a full timelapse of your greatest collapses.

Abriss is currently being developed by three Berlin students, who are currently looking at a full release in the first half of 2022 (the game will also be coming to Steam on release). I’m hoping that’s enough time to give the construction system a little more time to shine.