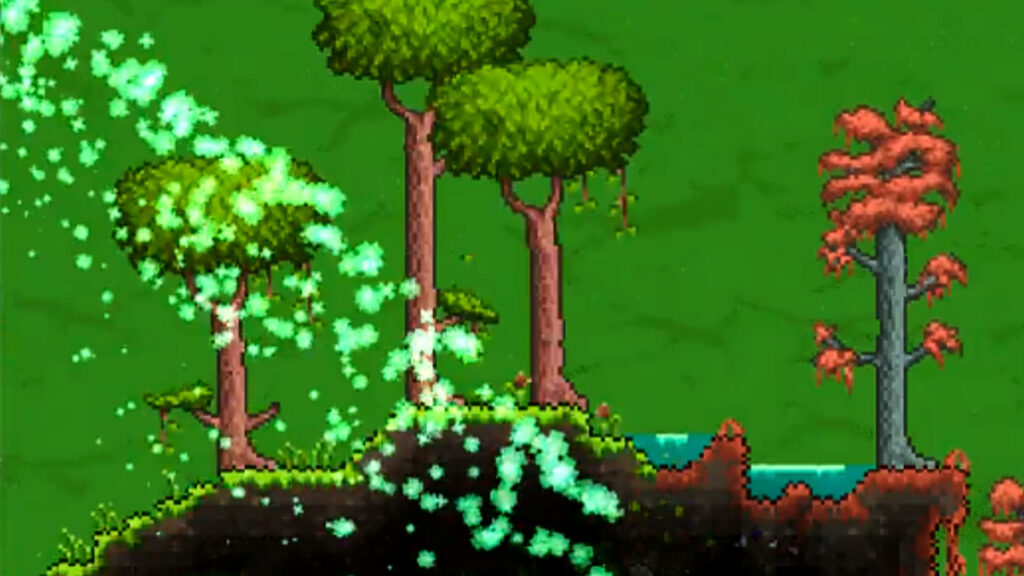 Terraria 1.4.4 update Labor of Love plans to end your corrupted jungle woes forever, with one major quality of life change set to make a huge difference to players of the crafting game. No longer will players have to spend hours carving out their jungle to insulate it against evil, or resort to Terraria mods to rescue biomes otherwise lost to corruption in the co-op game, and it’s all thanks to the addition of a new block type.

As the Terraria 1.4.4 update release inches ever closer, developer Re-Logic has finally revealed “the thing” that it has been teasing for a while – the introduction of infected mud grass tiles. That may not sound exciting, but veteran Terraria players will be aware of the nightmares caused by evil biomes encroaching upon your jungle tiles. The change, allowing mud tiles to become infected without turning into dirt, makes evil biomes much less of a threat to the long-term health of your jungle.

When in hardmode (the latter half of Terraria’s world progression), tiles affected by the corruption, crimson, or hallow will slowly spread their infection to nearby blocks. This means that, if left unchecked, the biomes can slowly take over your whole world. While the jungle is immune to the effects of the hallow, it is susceptible to whichever evil biome (corruption or crimson) happens to be present in your world.

This is a pain in any biome, but purification powder and endgame items such as the Clentaminator can reverse the infection and cleanse areas back to their world state. A new potion coming in 1.4.4 even helps players to spot any evil patches around the map, so they can be dealt with quickly. So what’s the problem with the jungle?

Simply put, one of the effects of the evil spread is drying out mud blocks, the mainstay of the jungle, and turning them into plain dirt blocks. This can’t be easily reversed, meaning that a jungle which gets hit by corruption or crimson spread can be ruined altogether. If too much mud is converted, the jungle area will instead turn into a standard forest biome – making it far more difficult to get your hands on critical late game jungle resources without a lot more work.

Typically, this has led to many players carving out a wide tunnel all the way around their jungle biome so that any evil biomes cannot spread across the gap. This update makes that a thing of the past, as you’ll now be able to use purification powder or the Clentaminator at any time to return that corrupted mud to the regular sticky brown stuff (and we’re not talking about the much-discussed poo blocks coming in the new update, either).

Also coming in Labor of Love is the addition of Terraria equipment loadouts. If you’re setting up your biomes in anticipation of the 1.4.4 release, be sure to check our Terraria happiness guide to get those helpful pylons sorted out. One particularly impressive fan-made Terraria build looks like a 3D landscape. Finally, if you’re after more options in the survival game genre, check out Farworld Pioneers, which looks like it could be Terraria in space.